Pike’s Polish mother and British father were separated by a period of martial law in the early 1980s, and their case made headlines in the British press until the couple were reunited in Britain.

The works played in the three programmes at Wigmore Hall on 14 October range from anonymous 16th-century pieces to a new commission for harpsichord, violin and tape. And Pike has gathered together an amazing line-up of soloists: the electrifying harpsichordist Mahan Esfahani, cellist Guy Johnston, lutenist Elizabeth Kenny, flautist Eimear McGeown, pianists Petr Limonov and Tom Poster, and a fellow violinist, Thomas Gould.

'The last few years have seen shifts in a global perspective that have been alarming to many,' says Pike. 'At such time music’s power to enrich lives, deepen our understanding of other cultures and send a powerful message of inclusion and respect cannot be underestimated.'

At 12 Pike was the youngest ever winner of the BBC Young Musician of the Year Competition and the youngest major prize winner in the Menuhin International Violin Competition. At 15 she made celebrated debuts at the BBC Proms and Wigmore Hall, soon after becoming a BBC New Generation Artist, winner of the international London Music Masters Award and the only classical artist ever to win the South Bank Show/Times Breakthrough Award.

The morning concert (11:30AM) includes the UK premiere of Penderecki's Capriccio for solo violin, Załubska's new piece for harpsichord, violin and electronics, and a piece once attributed to Bach but now know to be by the Gdansk-born composer Johann Gottlieb Goldberg.

At 3PM, the second concert opens with dynamic music by Lutoslawski and Szymanowski, and features Chopin's Introduction and Polonaise Brillante in C Op. 3

The day's grand finale (7:30PM) has a Polonaise in F minor and Nocturne in B flat for piano by Maria Szymanowska, Górecki's Pozegnanie (Farewell, 2009) for violin and piano, and Chopin's Piano Trio in G minor Op 8.

Pick a concert or go for total immersion: you'll be doing the mazurka by nightfall. 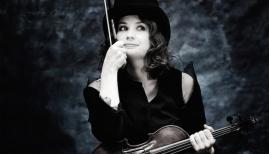