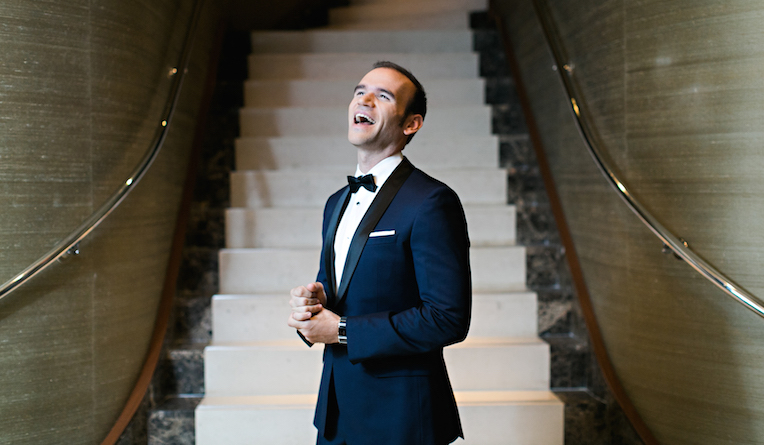 Michael Fabiano is in demand at opera houses worldwide. Photo: Arielle Doneson
When the curtain rises on the rough and tumble in a chilly Paris lodging between four struggling artists at the start of Puccini’s La Bohème, the impoverished friends can seem interchangeable – creative, hard-up, making do together. But the American tenor Michael Fabiano detects an important difference between the poet, Rodolfo, and his room-mates – the painter Marcello, musician Schaunard and philosopher Colline.

In rehearsal for the new production by Richard Jones of the opera at the Royal Opera House, Covent Garden, which opens on 11 September, he explains his theory to Culture Whisper: 'Rodolfo is a poet; he’s interested in words. He knows how to transfix a room with what he writes, he knows how to turn a phrase. That indicates more education – he may have come from a family with more resources and so he may have made the choice to live like this.'

That education may have equipped Rodolfo for his writing profession, but it leaves him ill-prepared to cope when the seamstress Mimi drops by for a match and then drops on the floor, weak with hunger. But with his famous aria ‘Che gelida manina!’ (‘Your tiny hand is frozen’), he finds the right words again, while the uneducated Mimi gropes for hers: ‘They call me Mimi,” she falters, over and over again.

This forensic attention to characterisation is typical of a singing star who has leapt up through the ranks of the world’s top opera houses to become a familiar and sought-after artist at the Metropolitan Opera House in New York, La Scala, Milan, and, since his debut with the Royal Opera House in 2015 as the wronged lover Lensky in Tchaikovsky’s Eugene Onegin, at Covent Garden.

For his return this year, which prefaces ‘multiple seasons’ ahead, still under wraps, he does a double: as well as Rodolfo, he is to sing the womanising Duke of Mantua in Verdi’s Rigoletto (14 Dec to 16 Jan). Fabiano believes that the Duke has ‘the propensity to feel, but he is basically a cad, black in his soul’. But, he adds: ‘Arguably it is not the Duke who is the blackest – because he doesn’t want anyone dead … and there are three killers in the opera.’ He has a point.

Today’s classy, and punishing, schedule – he keeps up by keeping fit, five times a week in the gym and flying single-engine prop planes – dates from a major award at the Met 10 years ago, and two big breaks. One was as Rodolfo for the Met at nine days’ notice, and the other in even shorter order, in 2011, parachuted in to sing Gennaro in Lucrezia Borgia at San Francisco Opera at the request of co-star Renee Fleming, and general director David Gockley, who had seen a clip of Fabiano on YouTube.

But how does he feel about, for instance an illicit recording of that triumphant first night at the Met as Rodolfo, widely viewed on YouTube? On the one hand: ‘When artists are pushed into the free zone, it devalues their work. Then the public expects your work to be free. But the amount of capital it takes to build a career, the expectations, get higher, the higher the artist goes. 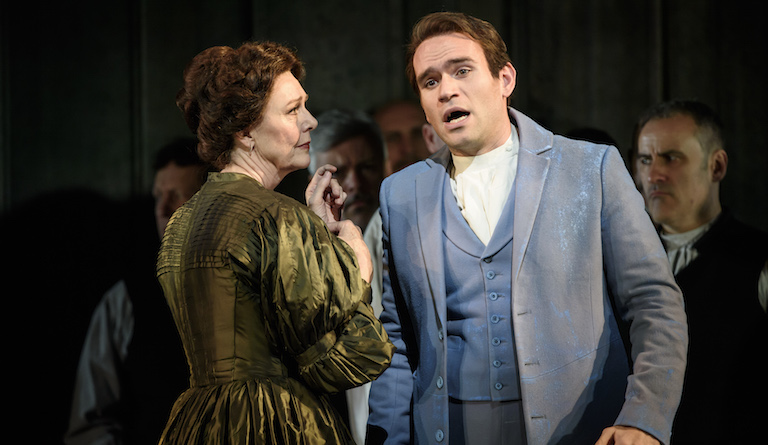 Michael Fabiano appeared at Covent Garden for the first time in 2015, as Lensky in Eugene Onegin. Photo: Bill Cooper

‘More people watch opera sitting on their couch than go into the theatres. When Maria Callas, for example, had a great new record in the 60s and 70s, there would be queues out the door to buy it.’ But YouTube can also be a lifeline, as it was for him, for younger artists. ‘YouTube can give notice to the public of artists they would might not ever have witnessed. It can give birth to a career.’

You get the impression, above all from hearing him sing, as many have done at English National Opera, that he was going to make it to the top anyway. Music was in his blood: his family on his father’s side comes from the picture-perfect fishing village of Scilla in southern Italy, and like many other Italians went to America for a new life after earthquakes caused devastation in the early 1900s.

His great-grandmother was born in the US, and his grandmother grew up to be a pianist and music teacher. He took her to one of his shows at the San Carlo Opera House in Naples, and after some days in the city, started speaking once more the Italian that had lain dormant for decades. On his mother’s side this Jersey boy is a bit of all sorts: British, Dutch, Russian … ‘I’m American through and through.’

It is in part the disillusion of his grandmother, Marie, who found music being squeezed out of education, that inspired Fabiano’s foundation, ArtSmart. Through it, children who would not otherwise have a chance to find their voice are given free vocal training, one to one, in school time. ‘Those who have great talents have great obligations to the community,’ he says of the project, which is very demanding in administrative terms, with red tape that has outdone any opera plot in its Byzantine and labyrinthine complexity.

But ArtSmart, now in three cities and shortly to be in six areas of deprivation, helps musicians at the other end of the training spectrum too. ‘Most music graduates were ending up in careers that were nothing to do with music. How could I help artists earn a living from music?’ The answer was to pay them well for four hours a week teaching the ArtSmart students who volunteered for the opportunity.

Bit by bit, the youngsters learn about the special alchemy that occurs when the human voice, with all its colours, layers and nuances, sings unamplified. Fabiano has described this as what happens when the voice ‘hits the bone’ of the listener, which, I say, sounds incredibly intimate. And he tells a story, like a parable. He was invited to talk about the arts to an audience whose other speakers were a surgeon, an astronaut and a major CEO.

‘I thought, what am I going to talk about after all these geniuses in their field. I had a speech all prepared, but when I went on I said that I would give a part of the speech but I’d like a piano rolled on to the stage. The audience listened to the speech, but weren’t particularly engaged. Then I sang one song from Cilea’s L’Arlesiana, and this audience – not classical music fans – stood up and rushed the stage!

‘Over the course of this event, they had heard other artists amplified. Then there I was singing in this quite large space, singing without a microphone. Scientists asked about how it was done.

‘We shortchange the public if we don’t given them that music.’