3 CW readers are interested
La Bohème, Royal Opera House 2021 review 3 La Bohème, Royal Opera House 2021 review Claudia Pritchard
When I was a student, regulars in the Covent Garden ticket queue talked of one elderly lady who had sat in the same Upper Slips seat for every performance of La Bohème since the retirement in 1926 of the great Dame Nellie Melba. But she would never have attended a performance quite like the Royal Opera’s current revival of this Richard Jones production, first seen in 2017.

This is the first opera that the Royal Opera has staged since March last year requiring a very large orchestra and chorus, and it has gone to such lengths to protect their performers as much as its audience.

In the auditorium, every other row is empty and there are empty seats between bubbles, so that the house is now less than half its capacity. In the orchestra pit, the usual 74 players had been reduced to 47, each one of them individually amplified. Conductor Renato Balsadonna therefore doesn’t have complete control over what the audience hears.

On stage, the revival director, Dan Dooner, had to keep his principal singers safe, both in rehearsal and in performance, by reducing contact to a minimum – just the occasional arm around the shoulders or brief embrace between Mimi and Rodolfo. 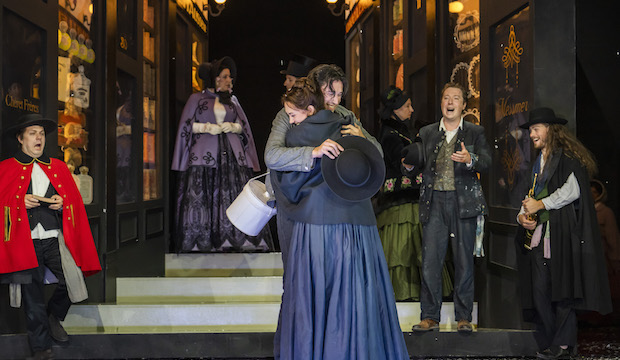 Act One, in which Mimi and Rodolfo meet and fall in love, and Act Four, when Mimi returns to die in Rodolfo’s arms, are the most successful in this revival. This production replaced a famous production by John Copley, performed regularly for 40 years, which was as pretty as a Victorian Christmas card. For his production, Richard Jones stripped right back to a bare wooden box for the garret, which bounces the singers’ voices right into the auditorium.

American tenor Joshua Guerrero’s likeable Rodolfo relished his top Cs. Russian-born soprano Anna Princeva as Mimì, making her Covent Garden debut, is a graceful actress who gave a wonderfully structured account of her Act One aria, the steel in her voice helping her to ride the orchestral climaxes and being particularly moving in her death scene.

After the intimacy of the solo voices in Act One, Puccini makes Act Two all about the chorus intertwining with the principals and creating glorious, roof-raising ensembles. In this revival, the chorus are kept offstage (miked, amplified and sounding other-worldly), with only a handful of choristers who have solo lines allowed onto the set and only six people allowed in the Café Momus at any one time, and with 10 children instead of 20. It all felt like making Christmas dinner with wartime rations – heroic, admirable but a bit sad.

Act Two is also the comedy act when Marcello’s ex, the outrageous Musetta (Danielle de Niese), arrives with her current sugar daddy, creates a scene, effects a reunion with Marcello (the lively Boris Pinkhasovich, displaying a gorgeously rich baritone), sticks the sugar daddy with the bill and whips off her bloomers. The Bohemians threw themselves into this scene. 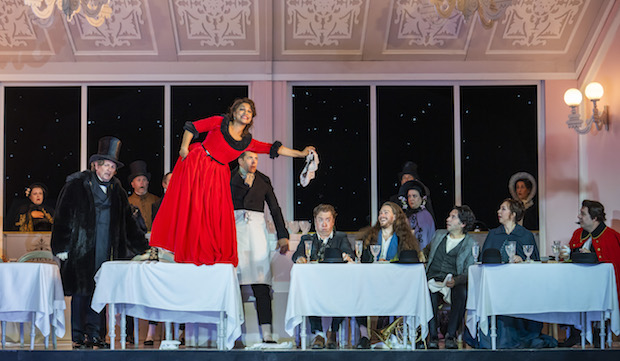 Gianluca Buratto as Colline had been to the barber’s between Act One and Act Two and, now clean-shaven, made every line count with an enormous voice, effortlessly produced, which he scaled down to a subtle pianissimo for the aria in the last Act in which he parts which his coat to buy Mimi’s medicine.

American bass-baritone Cody Quattlebaum's luxuriantly-haired musician Schaunard makes the most of every line. His joy at making his Royal Opera debut seemed to radiate from him, as he he threw himself into a hilariously inept version of break-dancing, a wonderful one-man parade of his own making.

Act Three is the piece of Puccini that I’d take to my desert island – heartbreaking, with unending melody. Princeva sang Mimi’s farewell aria with great poignancy.

There is much to enjoy in this revival and, of course, it is vital that it took place at all, bringing the Chorus and Orchestra – the lifeblood of the Royal Opera – back out of enforced retirement. As we look forward to the day when both can be back once again at their magnificent best, we mustn’t grumble at current limitations.

And of course the Royal Opera House is still the most beautiful theatre in London and a thrilling place to spend an evening. Overheard in the interval: “And guess where she is now? At George Clooney’s 60th birthday party!” 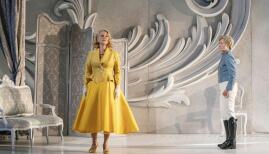 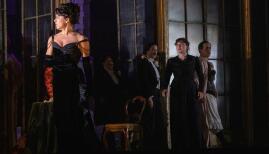 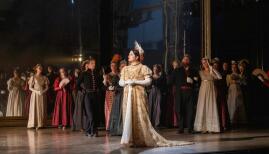