At Garsington Opera, where the welcome revival of this much-loved opera joins three new productions this season, these massed voices rose even more movingly as fully 24 singers began their harvest song in the ravishing gardens visible from the airy and transparent auditorium.

After 15 months without the simple solace of humans singing together in harmony and in big numbers, this age-old shared act felt like a new discovery – and also like a big step back to what we took for granted as normal life.

Eugene Onegin is a big opera, with four important dances that are part of the plot and character development, composed by a master of ballet music. In this very welcome revival of Michael Boyd’s production, first seen in 2016 with Natalya Romaniw and Roderick Williams in the leading roles, we get the lot. The spirited peasants’ khorovod, a birthday waltz and spirited mazurka, and final stately polonaise, are, like the chorus singing, uncompromised by Covid. 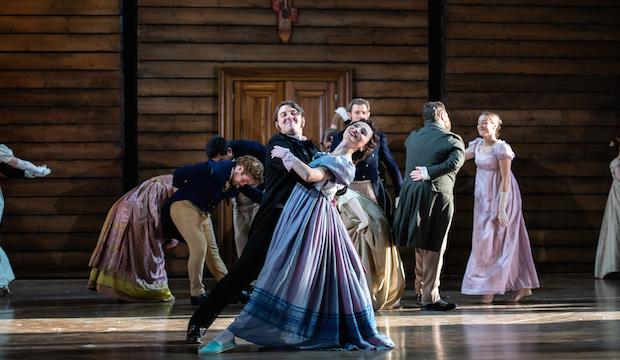 Which is not to say that today’s safety measures did not also play a huge role in rehearsals and performance, making the achievement of bringing this big work to stage even more impressive. Read about the measures that the company had to take, and be amazed. Every day of rehearsal, for example, there was a limit of 15 minutes, one minute at a time, on performers’ close contact.

What is really impressive about this great feat is that from where we sit in the half-sized, safely spaced audience there is nothing skimped in the choreography by Liz Ranken and Lina Johansson or Garsington Opera Chorus trained by music director Jonathon Cole-Swinard. The wall of sound, the whoosh of limbs – ah, how we have missed this!

For all its grand scale, with Tom Piper's opulent mid-19th-century designs, Eugene Onegin is the intimate story of a seesaw relationship in which the lovers are never united. The young Tatyana, romantic daughter of a land-owner, falls for a careless, floppy-haired man of the world who visits with her sister Olga’s fiancé. He rejects her youthful passion. Years later, on discovering her to be the impressive new wife of an old friend, he in turn falls for her, but too late: she will not betray her devoted older husband. 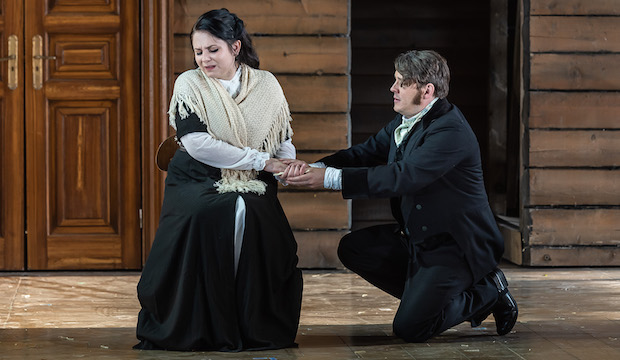 As Onegin, baritone Jonathan McGovern, whom we last saw at Garsington in the title role of Boyd’s excellent 2019 Don Giovanni, is self-absorbed and greedy, pinching the newly-made jam. (Smitten Tatyana treasures the discarded jar.) Wretched with remorse by the final act, his voice is hollowed out by the emotion of the shattering last scene. And for all the character’s early louche complacency, there is a nailbiting moment’s hesitation before a senseless duel that changes everything.

But in many ways, this is Tatyana’s opera. Moldovan soprano Natalia Tanasii, making her role, house and British opera debut, is a very exciting new talent. Her rich and creamy soprano, variety of expression, sensitive dynamics and dramatic subtlety make Tatyana's journey from girlhood to womanhood poignant and believable. Natalia Tanasii is a name to remember and to listen out for in future.

Also on the way up, Ossian Huskinson, managing the horrid duel with big-voiced efficiency, his few lines sung in a bass-baritone you long to hear more of. Fleur Barron’s Olga has lovely depth in her big-hearted mezzo-soprano, her Lensky (Sam Furness) the pitiful victim of a jape taken too far. Yvonne Howard and Kathleen Wilkinson as the wise mother and old retainer lament lost love with pathos. 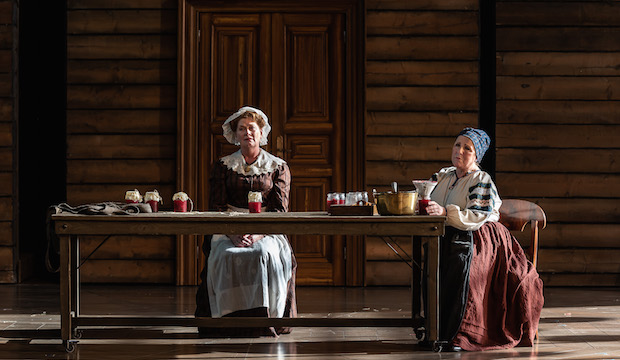 Hands up who else felt a lump in their throat when they saw the Philharmonia Orchestra truck in the car park after all this time? And what a stupendous performance by these musicians under Garsington's artistic director Douglas Boyd, now romantic as they mirror Tatyana’s inner life, now rumbustious for the workers’ hop.

Smooth and jagged, suave and urgent: after a time when everything was downbeat and samey, this layered and highly charged production, brilliantly performed, is just the vital experience we need.

Eugene Onegin is sung in Russian with English surtitles. Performances are sold out, but returns or additional seating are possible. Click here for more information