The peacocks certainly made their presence felt on opening night, with raucous calls from the summery gardens outside the seasonal opera house, newly configured for this year's demands for audience space. After a long grey winter, this burst of brilliant colour was treat indeed.

Not that the show ends at lights. Rather, it starts as soon as the audience steps up from the park and sees, in place of traditionally tiered seating, clusters of elegant little chairs, from which the audience can join in the gossip, scandal and plots. 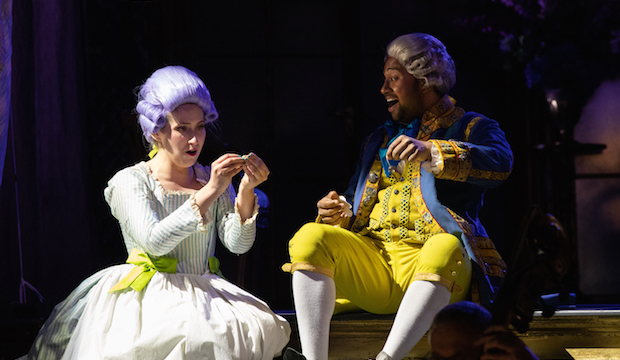 Wigs, breeches, buckles and bows are the order of the day, but director Oliver Platt sews pleasing anachronisms into Mozart's comedy of manners and marriages. Maid servant Susanna on her wedding Eve studies Brides magazine; sex-crazed adolescent Cherubino serenades the glamorous Countess like a glam rock pop idol, complete with improvised mic. No one on stage can resist a little boogie when the beat is at its boppiest.

In the pit, in charge of the bopping beat, is George Jackson, conducting a City of London Sinfonia pared down for this Covid-safe production. And the pit is itself wrapped inside an apron stage that at times brings the audience in its drawing room to the heart of the action. Takis has admirably recycled elements of Cordelia Chisholm’s set for La Traviata. (La Traviata returns to OHP from 5 to 27 June).

So flukey are the laws of acoustics, that this proximity did not always make guarantee a big sound from the singers on opening night, projecting as they are into thin air this year, without the soundbox of tiers. But there is intimacy and comedy to be enjoyed. 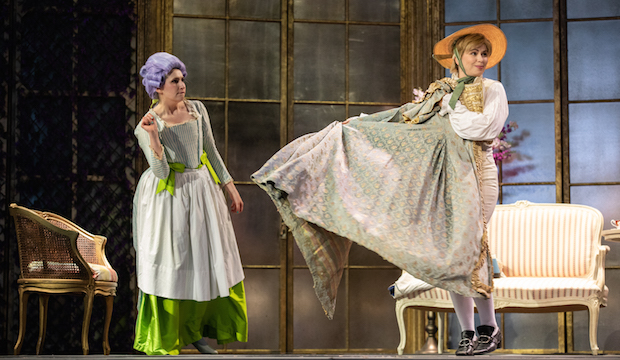 The impending marriage is beset with hurdles, including the lust for Susanna of man servant Figaro's master, the Count. He neglects his Countess, who joins in a plot to trip up the Count, hatched by the servants. Meanwhile, Figaro is being chased for a debt, and threatened with marriage to creditor Marcellina if it goes unpaid.

Add in Cherubino, chasing everything in a skirt and finally disguised in one himself, to avoid an army posting, plus one aggrieved gardener, and the comic misunderstandings mount up merrily, and the musical pile-up at the end of Act 2 is a wondrous as ever.

In the title role, Ross Ramgobin is nimble in voice and action, and ever one step ahead of Julien Van Mallaerts' entitled Count. Elizabeth Karani's capable Susanna pulls off her musical marathon with energy to spare, her relationship with the Countess one of female mutual understanding, as if they share a silent coded language. 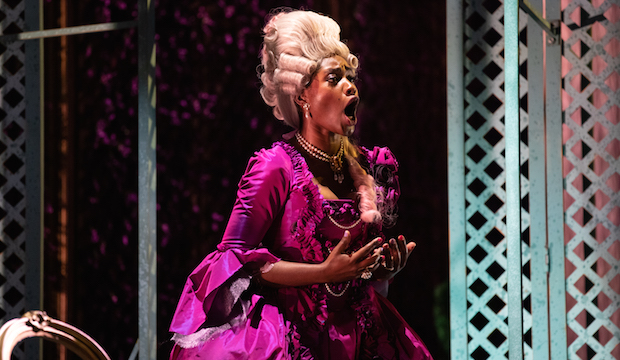 Nardus Williams as the Countess is both stately and fragile, her heartbroken arias most affecting. Samantha Price's nifty Cherubino is very warmly done, even if her leap into the flowerbed is more run than jump.

Snooping Bartolo is sung with genuine threat and danger by James Cleverton, while a reduced Opera Holland Park Chorus witnesses the shenanigans.

OHP has a reputation for spotting singers on the way up, and two performances (14 and 16 June) will showcase rising young artists, whose names are sure to become as familiar as those of the much-loved artists in this good-hearted production.

The Marriage of Figaro is sung in Italian with English surtitles. The production is sold out, but click here for returns. For the full Opera Holland Park season click here
by Claudia Pritchard 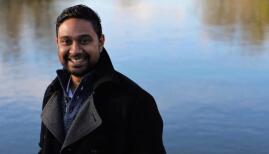 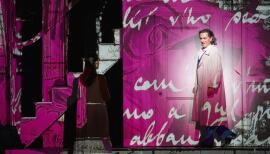