Rossini, Tchaikovsky, Handel and Richard Strauss operas are planned for the summer, with dates and casts to be announced. But keep room in your diary from May to August

Returning is a five-star production from 2016 of Tchaikovsky's Eugene Onegin. Then starring Roderick Williams as the aloof older man and Natalya Romaniw as the romantic youngster he rejects, the production Michael Boyd's production is elegant and profound.

Rossini's outrageous comedy Le Comet Ory guarantees some much-needed laughter, with director Cal McCrystal in charge. The One Man, Two Guvnors director proved his opera chops with a hilarious Gilbert and Sullivan Iolanthe at English National Opera in 2018, and is sure to be going for wit and slapstick again.

The director Netia Jones has carved out a unique niche in opera direction with her technical skills in video and intelligent interpretation. Directing Handel's fantastical Amadigi, she is sure to include some spectacular visual effects.

Richard Strauss's jewel-like orchestral colours will ring out with the romantic Der Rosenkavalier. The same composer's Capriccio was one of the big hits of 2018, and this sumptuous piece is likely to be equally atttractive. All eyes and ears will be on the casting of this opera, in the all-important roles of the Marschallin and of the young lover.

With this year's season postponed – the productions planned will be staged in coming years – Garsington fans can still look forward to the streaming, date to be announced, of its September performances of a semi-staged Fidelio, and revisit the heartening Unmute concert, featuring Soraya Mafi, Nardus Williams, Roderick Williams and other popular artists. Other productions are also on YouTube.

Garsington 2021 is likely to be scheduled between May and August 2021. Click here to join the mailing list, to receive updates and priority booking
by Claudia Pritchard 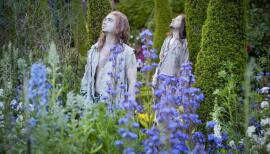