A great religious work, a profound human drama, a showcase for virtuoso singing and playing... Bach's St Matthew Passion is many things, but few can resist its power

This masterwork was originally written to be sung at Bach's church, the Thomaskirche in Leipzig, on Good Friday, 11 April 1727. It goes far beyond the Christian story and is now valued by all who love music, and all who love humanity, as the pinnacle of musical expression regarding the human condition.

Performances abound around Easter time, but the piece is never out of time. This one, on Palm Sunday (25 March), conducted by early music specialist John Butt and performed by the voices and players of the Dunedin Consort, promises to be spellbinding as it unfolds the story of Christ's last days on earth.

The St Matthew Passion is one of only two surviving Bach passions and it is fantastically complex, with two and sometimes three independent choirs, a double orchestra, and virtuoso solos for unusual instruments.

It is essential listening for fans and newcomers alike, but is sure to sell out: every performance does. 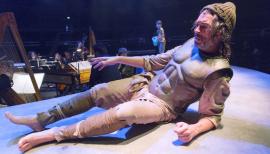 From pop to opera: the musical curve of Christopher Purves
Sign up to CW’s newsletter
By entering my email I agree to the CultureWhisper Privacy Policy (we won`t share data & you can unsubscribe anytime).