In a triumphant Royal Opera production of Monteverdi's setting of the Odyssey, an exhausted traveller's marriage is put to the test

But the characters who people the slowly rotating circular stage – a ring donut with the orchestra in the hole – are not in Venetian silks and finery, but trainers and T-shirts: this is not an antique tale but a story for today about prejudice, honour and the kindness of strangers.

Ulysses has been away from the land he rules, Ithaca, for 10 years, while his faithful wife Penelope has fought off suitors and refused to give him up for dead. When he is washed up on his own shores he is helped back to his court and, despite his changed appearance, finally persuades Penelope that he is her husband, by describing the bed cover that only he would know.

But you can be sure the return is not that simple. He must break through disbelief and disdain, and the true nature of others is revealed by their attitude to an apparent stranger. And all strangers. When the dispossessed, swaddled in foil blankets like so many refugees whose plights we have seen on our screens, plead for aid, it is the gracious Penelope who doles out the bread and water. And it is a simple shepherd who takes in the wanderer. 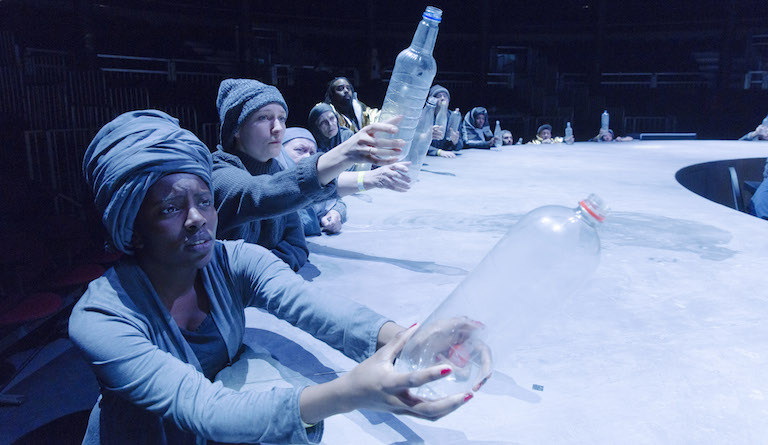 The dispossessed plead for aid in The Return of Ulysses at the Roundhouse. Photo: Stephen Cummiskey

As singers career around the runway, the Orchestra of the Early Opera Company under Christian Curnyn is also on the move, and if you are lucky you don't notice this at first – but hang on, wasn't that musical giraffe the theorbo over there a minute ago? And now it's over here? It's always a treat to see weird and wonderful early instruments, but this kaleidiscope is mesmerising and enchanting.

Like the best directors, Fulljames picks a handful of everyday props and conjures magic that seems at once both obvious and beyond belief – clouds and sheep made of balloons, a tandem for a goddess's space chariot, pedalled at breakneck speed by Minerva (hand mezzo-soprano Catherine Carby that yellow jersey).

As Ulysses, the baritone Roderick Williams combines vulnerability and a tangible loneliness with the steely core and agility that keep a Greek hero one finely calculated step ahead of death – both warm and pained in music that flows like the oceans he has crossed. The unpleasant suitors are the dependable tenor Nick Pritchard, the astonishing bass David Shipley (look out for him in the ROH's Carmen next month) and ROH returner the American counter-tenor Tai Oney. Samuel Boden turns in a great performance as Ulysses's nimble son Telemachus, disaffected under headphones, obsessed with Helen of Troy.

Christine Rice, due to sing Penelope, had to walk the role only on first night, having lost her voice, but is due to sing the remaining performances. She was voiced, and very beautifully, from the pit by the fast-learning Australian mezzo Caitlin Hulcup. The Roundhouse Choir and Thurrock Community Chorus were touching in their survivors' fragility, determination and resourcefulness: the foil blankets are cheerfully turned into fashion items – creativity surpasses every deprivation.

With its Shakespearean echoes, The Return of Ulysses winds up and unwinds to its resolution with great ingenuity and charm in John Fulljames's second production in this space: the same composer's Orfeo was staged here in 2015. If it feels a little drawn out at the end, despite many sensible cuts, maybe that's because we are used to Shakespeare's brisk reconciliations – 'Oh it's you! Let's party, and tell me all about it later...' And Ulysses' revenge on a maid who is arguably the victim of coercive control strikes a jarring note.

Nevertheless, this is a golden and wondrous event, beguiling, handsome, witty, and full to the brim with modern meaning.

The Return of Ulysses is sung in English with English surtitles.

Royal Opera House 2017/18: curtain up on a whole world of emotions
Sign up to CW’s newsletter
By entering my email I agree to the CultureWhisper Privacy Policy (we won`t share data & you can unsubscribe anytime).