Stockhausen is renowned as one of the 20th century’s greatest pioneers of classical and electronic music. He began his operatic career relatively late, when at age 50, he began composing the monumental, seven-part epic cycle of operas called Licht (Light), anchored by the central concepts of the days of the week, the planets, and elemental colours. Donnerstag – Thursday, Jupiter, and bright blue – is, naturally, the fourth opera in this cycle.

It is sure to be a unique experience, but for those who like to brag about their love for long and monumental masterpieces – be warned. Stockhausen’s 1980 opera is a four-and-a-half-hour journey that takes in giant themes with biblical and mythical weight. It’s been described as ‘something like a Divine Comedy and a Comédie Humaine in one.’

Weaving biblical and mythical themes into its storyline, the opera follows the life of the angel Michael as he assumes human form and moves through the world. Stockhausen instructs opera should be bookended in the foyer by a “greeting” and a “farewell” of music, the latter played by trumpeters perched on the surrounding rooftops.

Quite a challenge to stage then. However, this is looks like a suitably ambitious production. The piece requires 14 performers – 3 voices, 8 instrumentalists, 3 dancers – alongside a choir, an orchestra, and electronic tapes. Conducting is Maxime Pascal, who leads the massive combined forces of two orchestras, Le Balcon and London Sinfonietta, New London Chamber Choir, and students from the Royal Academy of Music. French director Benjamin Lazar helms the production. 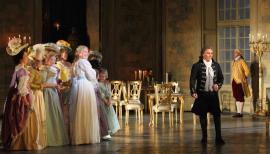 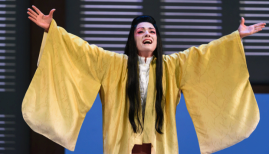