Jeremy Renner and Elizabeth Olsen star in wintry thriller Wind River, a welcome injection of gun-toting fun as we edge towards the awards season

It’s a gnarly-looking gun, and the bullets themselves are massive great things; when the bad guys get hit, they’re practically yanked out of the frame as if with a vaudeville crook. For a few minutes of boyish glee, the critics suspend their judgement and give themselves up to one of cinema’s simplest pleasures.

It’s not something that they’re allowed to indulge in for too long, though. This is a Taylor Sheridan movie, after all, meaning that Wind River is not just a film about Jeremy Renner’s massive bullets. It’s about all kinds of other stuff, like redemption and grief and… evil, maybe? But it’s not necessarily better for it.

In blizzard-battered Wyoming, Cory Lambert (Jeremy Renner) is pest-control on a large scale – he hunkers in snowdrifts sniping wolves and lions that prey on the locals’ livestock. It’s while he’s combing the mountains for things to shoot that he finds the body of a teenage girl – a Native American from the local reservation and the daughter of an acquaintance.

When the FBI is called in, agent Jane Banner (Elizabeth Olsen) finds herself hopelessly unprepared to deal with the harsh environment and intractable locals, and so she employs Lambert for his tracking skills. As the two kick down doors and ski-doo through whiteouts, the urban hotshot and the wild mountain man chafe, disagreeing on proper procedure. 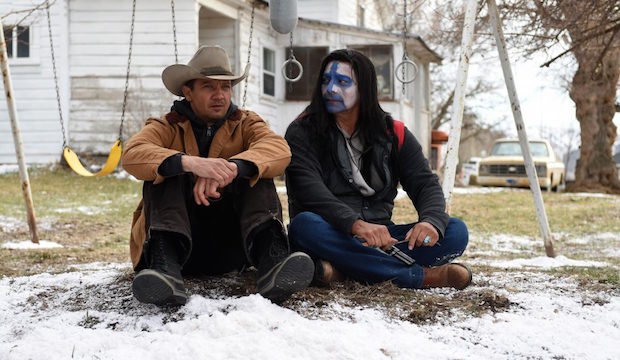 Wind River is really unabashed about its high cliché quotient. Banner is both a big city cop out of her depth in the wilds and a rookie in need of cutting her teeth. Lambert has a tragic backstory that mirrors the murder in several key particulars, giving his mission an extra emotional resonance. Together, they are mismatched detectives learning to get along.

Despite being relatively highfalutin (in a forgettable way – what is this film about?), Wind River still boils down to a classic male vengeance fantasy – the kind that John Ford subverted back in 1956 with The Searchers. This time it’s an ‘Indian’ who has been violated by the ‘cowboys’, but that’s not an especially clever switcheroo.

We almost began this review by reminiscing about how good No Country for Old Men is, before remembering that that’s how we introduced the last Taylor Sheridan film, Hell or High Water. As we said then, the similarities between Sheridan-scripted films and the Coen brother’s masterpiece aren’t just cosmetic (men, hats, guns, landscapes). They also extend to a need to find philosophy amid the fireworks, making existential parables out of shoot-’em-ups.

This wouldn’t be a problem if Wind River was even half as deep as it thinks it is.