However, he dropped the project just days before shooting was due to begin, citing ‘creative differences’ over the movie’s script.

TRY CULTURE WHISPER
Receive free tickets & insider tips to unlock the best of London — direct to your inbox
You can see why he left.

Dominic Cooper was quickly drafted in to play the titular Stratton, a Naval special forces commando trying to prevent a mass biological attack masterminded by a former counter-terrorism agent who has been presumed dead for 20 years.

In reality, they could have enlisted any actor with a hole in their schedule. The same goes for the rest of the actors because Stratton doesn’t really do anything with them.

The characters have as much personality as cardboard cutouts. In fact, it feels inaccurate to call them ‘characters’; there are video games that invest more time into developing the figures that populate their storylines – and feature more impressive action sequences as well.

Perhaps the one person who is irreplaceable in the cast of Stratton is Danish actress Connie Nielsen in the role of the MI5 chief. Her performance is so spectacularly bad it is hard to think of many who could do a worse job. 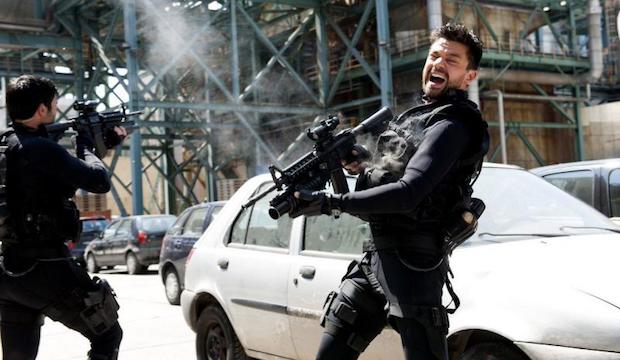 Sadly, Nielsen is on screen a lot due to the film’s endless string of briefings and debriefings at HQ. Being called into the office so frequently almost makes you feel sorry for Stratton, as a naval officer, having to spend so much time on land. Almost.

The film’s only desperate attempt at an emotional thrust is Derek Jacobi, who plays a happy-go-lucky surrogate father to Stratton. His jokes and anecdotes, though, feel like scraps from a much more engaging script – probably the script that Henry Cavill wanted to film.

Let’s just hope Stratton will sink without a trace.

Kathryn Bigelow is bearing witness with her film Detroit, and it's complicated
Sign up to CW’s newsletter
By entering my email I agree to the CultureWhisper Privacy Policy (we won`t share data & you can unsubscribe anytime).