Call him by his name, if you dare. DC’s freshest superhero goes under a number of aliases – Captain Sparklefingers, Power Boy, Frequency Flinger, Sir Zaps-A-Lot – but the magic word that has to be said, the one that gives the movie its name and a star its stupendously entertaining calling, is Shazam.

If it sounds arbitrary or ludicrous, this could be deliberate – Shazam! isn’t trying to be as philosophical as other recent comic book characters that have earned the derogative titles of Social Justice Warriors. The film follows a 14-year-old boy, Billy Batson, who is tossed between foster homes as he restlessly tries to find where he came from and the place where he belongs now.

Magic intersects with Billy’s seemingly unremarkable adolescence when a mysterious ancient wizard starts looking for a successor. Many others confess their bizarre and brief abductions, having been summoned and tested over the years.

But it’s only when the grumpy teenager finds himself face to face with the celestial being and says the S word (an acronym for each of the six ‘immortal elders’: Solomon, Hercules, Atlas, Zeus, Achilles, Mercury), that his new identity propulsively manifests. The scrawny teen transforms into the tall, the strong, the all-American wholesome Superman-taught-me-everything figure – Billy Batson is Shazam. 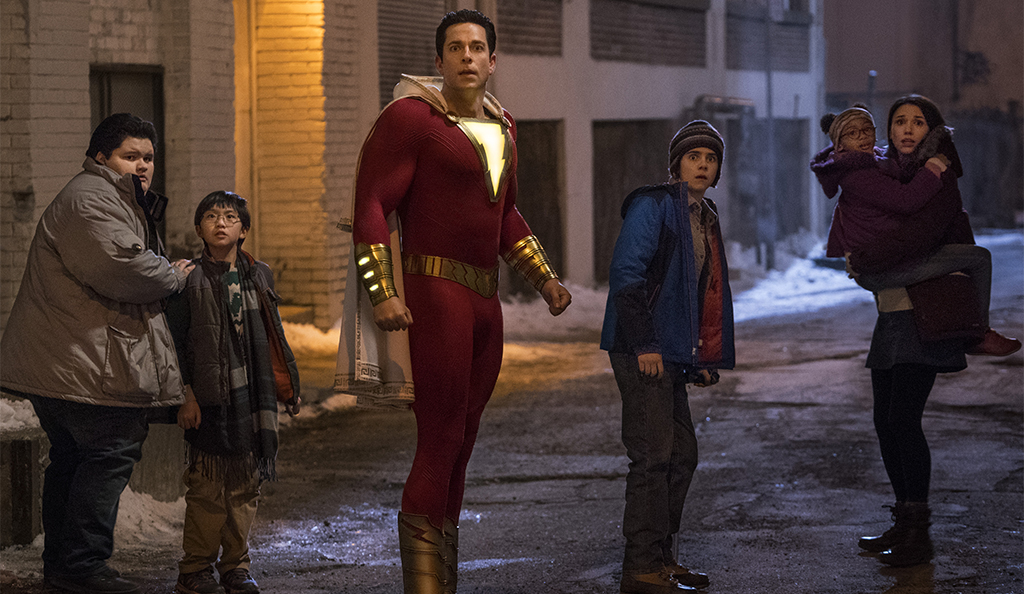 The gang's all back together in Shazam!

Like in Penny Marshall’s 1988 Tom Hanks-starring comedy Big, the gleeful humour of Shazam! comes from the realisation that young Billy is now living in a grown man’s body – a particularly super one, at that. But unlike Big, the end goal isn’t to revert back to being small – as Billy can switch and control this with one word. Instead, the name of the game is finding and protecting your family, rather than following any kind of lone star in a holier-than-thou battle for otherworldly heroism.

Superhero fatigue might feel all too real when faced with yet another new figure we have to believe in, but Shazam! fully embraces the overstuffed universe it comes from. The jokes rarely stop, references to Superman and Batman abound, and the script is sharp enough to navigate the conventions of the fantastical genre without ever veering too far into metafictional vacuity.

The film brims with self-awareness and chutzpah, building a bridge between fearless kids and encouraging adults who know when to let the heroes take over. Youth reigns, as the pack of mismatched kids (led by a sparkling Jack Dylan Grazer, Zachary Levi-as-grownup-Shazam’s immediate sidekick) drive the film.

They’re never made to act more mature than would make sense, nor do they ham up any sense of frivolous childishness. Grazer and Levi bounce off each other effortlessly, animated words of amazement spilling out of their mouths with the intoxicated excitement of drunken teens – except they're only high on magic.

Conventionally dramatic stakes of Good vs Evil take a backseat, as the main treat of Shazam! lies in the chemistry between the teenagers who are taken seriously precisely because of how much fun they’re having. Take the kids, their friends, and yours too, and embrace your own hero within at the cinema – all you have to do is say the word.