In his latest historical drama Peterloo, British filmmaker Mike Leigh takes on the events leading up the massacre, as well as the event itself. He tracks the working class struggles, the reform debates, and the cartoonish governmental discussions leading up to this calamitous event – which, Leigh claims, have been largely ignored by the textbooks.

There are many handfuls of characters to ponder. There’s a few families, one of which welcomes the return of their boy Joseph (David Moorst) from the recent Battle of Waterloo. Maxine Peake plays mother Nellie, who scoffs at her husband’s pursuit of social reform.

Soon the reformers meet with the middle-class liberal orator Henry Hunt (Rory Kinnear), who unites everyone in St. Peter’s Field. And every so often, we’re dropped into the stuffy government rooms with the gaggle of pompous, privileged policy makers. 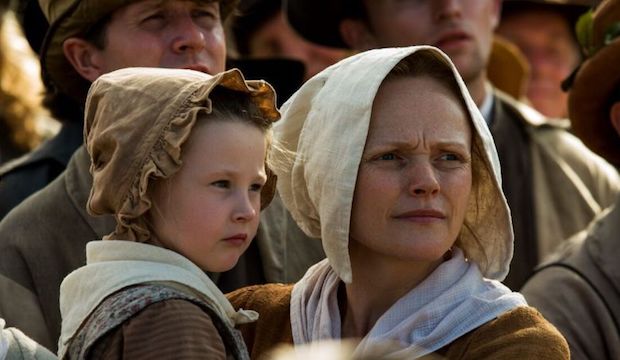 There are a lot of thoughtful discussions to pore over, and the political speeches leave a few marks of interest. Leigh suggests the massacre with an intriguing sense of calm, and never ignores the hardships of the working people. Most shockingly, he informs his audience about the ludicrously severe punishments for minor offences – sent to Australia, or even hanged, for stealing (‘Thou shalt not steal!’).

But the characters are too numerous, and the exhaustive number of speeches bloats the script into something of a political manifesto – promoting the seemingly timeless call for social change. It’s often invigorating and funny to watch wildly exaggerated and gesticulating Tories squeal at the idea of being overthrown – but credible drama and character depth are suppressed as a result.

Although each character has their own Dickensian personality, there’s not a great deal underneath and it’s the same with the dialogue, little of which feels natural. Most of the lines are too stunted, drenched in heavy politics, without much insight into the stories of the people reciting them.

Peterloo is a well-shot political history lesson, and will no doubt be shown by university lecturers – but it feels slugged out over 154 tiring minutes. The film has its moments, and the final massacre itself has brief glazes of the superior Odessa Steps sequence in Battleship Potemkin, but Leigh’s storytelling grows more lethargic with every sermon. Perhaps we should rely more on Spielberg for the history lessons instead.

Reviewed at London Film Festival 2018. Peterloo is out in cinemas on 2nd November.