Based on the New York Times bestseller by Angie Thomas, The Hate U Give offers a galvanising YA story starring Amandla Stenberg and KJ Apa

The Hate U Give film review 4 The Hate U Give film review Ella Kemp
Young adult fiction can educate and inspire audiences with stories of love and adventure, but more often the focus draws on the ‘young’ aspect and leaves over-18 consumers with a sense of outgrown indifference. From The Fault in Our Stars to The Hunger Games, girls have grown up inspired by the bravery of heroines fighting danger both ordinary and fantastical, through role models like the loving cancer patient Hazel Grace Lancaster (Shailene Woodley) or overnight warrior Katniss Everdeen (Jennifer Lawrence).

The Hate U Give, based on Angie Thomas’ New York Times bestseller of the same name, achieves this and then some. The heroine is Starr Carter (Amandla Stenberg), a black teenage girl to inspire young fans and educate adult viewers alike, by challenging far more than a parent’s understanding of Tumblr or the sneakers that aren’t cool anymore. The first acronym to be spelled out is OTP (one true pairing, a couple that is perfect for each other), but the one that establishes the fllm’s essential mission is THUG LIFE.

The legendary hip-hop artist Tupac Shakur (best known by his stage name 2Pac) broke it down simply: The Hate U Give Little Infants F***s Everybody. Traditionally, pop culture references wink at YA audiences with metatextual cameos offering an accessible way into the teenage psyche. Ed Sheeran and the Disney World punctuate the sugary culture of John Green novels, while old school movies inspire the teen filmmakers in Me, Earl and the Dying Girl, but 2Pac’s concept inspires both characters and viewers of The Hate U Give to reckon with injustice as well as popular entertainment. ‘That’s the hate they’re giving us, a system designed against us. That’s Thug Life’, Starr’s father Maverick (Russell Hornsby) explains.

Starr accepts her identity as living between two versions of herself: Garden Heights Starr, where she lives with her brothers and parents in a neighbourhood with the colour temperature cranked up to a constant golden-hour glow, and Williamson Starr, a quieter girl who grits her teeth and smiles while her white classmates use slang that would make her seem too ‘hood’. She has friends and a nice white boyfriend, Chris (KJ Apa) and she’s popular and inoffensive, because it might be better off that way. The threat of racial profiling and police brutality hangs over every school day – 'the Talk' about sex (that teen movies usually wind up like clockwork) gives way to 'the Talk' that could save the lives of Starr and her siblings, and every other kid who isn't white. It explains how to behave when pulled over by the police, according to the Black Panther Party’s Ten-Point Program. 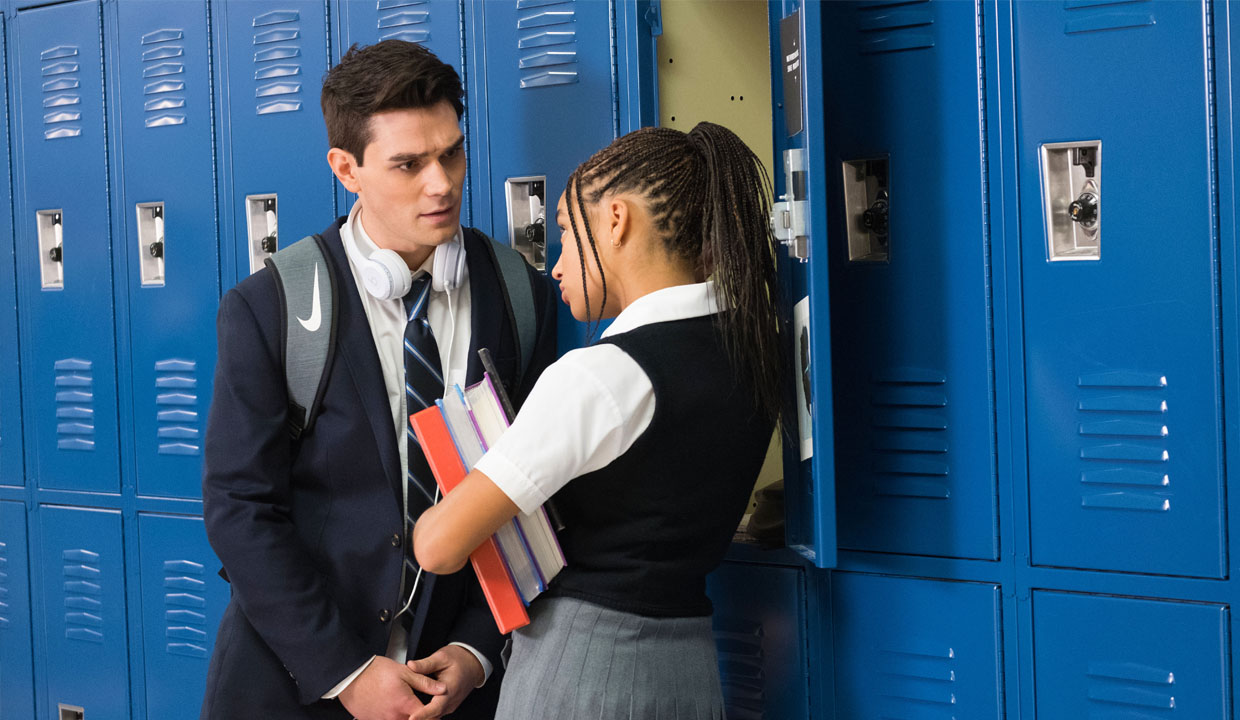 Starr (Amandla Stenberg) reckons with her identity, and her white boyfriend Chris (KJ Apa) in The Hate U Give

But when tragedy strikes, the most extensive preparations can’t prepare Starr for the pain that ensues. Stenberg evokes fear and stolen innocence with incredible sensitivity, transcending genre limitations to affect a universal audience. To a viewer who is unfamiliar with such shockingly quotidian injustices, Starr fills the screen with emotion that urges a call to action. The actor finds strength in vulnerability, galvanising a world that needs inspiration as much as condemnation. Stenberg's Starr cares for the people she loves with such devotion that her confidence to speak up rips through any formulaic prerequisites, commanding unwavering admiration.

The film isn’t afraid of brutality because reality isn’t either. The glossy design and rousing music maintain a level of theatricality which keeps adrenaline high, in order to provide an accessible education on an unglamorous situation. But the surprising commitment to the necessity of violence challenges the understanding of what children can handle. This refreshes the reputation of YA conventions, too often showing a cleansed version of the values teenagers are told to care about, by finally giving them control to make their own noise.

‘Your voices matter, your dreams matter, your lives matter. Be the roses that grow in the concrete’. The formula of this mantra looks familiar, but the fire has never been hotter. By capitalising on the vitality of a new generation and trusting them to rise up, the film teaches an alien audience to wise up. Serious when it needs to be and hopeful whenever it can be, there's gold dust in the maturity of The Hate U Give – it widens the net of the voices that deserve to be heard with the tools to make a diverse crowd listen.