The HBO adaptation of Ray Bradbury’s classic Fahrenheit 451 updates the story in interesting and relevant ways, creating a true dystopian tale for our troubled times

Back in 1966, when François Truffaut adapted Ray Bradbury’s Fahrenheit 451 for the screen, he chose to omit traditional opening credits, with the cast and crew listings being spoken out loud to reflect the reality of a future where written works are burned. Ramin Bahrani’s new take, made for HBO but also shown on the big screen thanks to the Cannes Film Festival’s midnight sidebar, doesn’t do anything quite as bold while remaining an intelligent adaptation that updates Bradbury’s prose in response to the time we live in.

The premise remains very much the same: in an unspecified future, all books, with few exceptions (the Bible being one of them), are burned at the hands of the fire brigade, headed by John Beatty (Michael Shannon, on typically riotous form) and his protégé Guy Montag (Michael B. Jordan), with the latter beginning to experience a crisis of faith after certain events. And yet, some things have changed: the rebels, named Eels, try to save literary works by uploading them online and the firemen themselves are stars on social media, with their exploits broadcast 24/7 on the Nine (this world’s equivalent of the Internet). History has been rewritten, individual opinions and dissent, condemned. We are basically one 'Fake news!' away from a full-blown indictment of the current social and cultural climate in the United States. 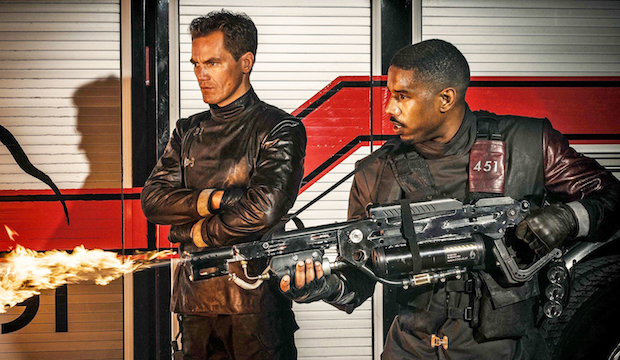 Michael Shannon and Michael B. Jordan

Crucially, Montag’s wife, a key player in the original novel and 1966 film, has been omitted entirely from this version, presumably for length (including the credits, the 2018 adaptation runs 100 minutes). She’s been replaced by Yuxie, a Siri-like artificial intelligence shared by all 'Natives', with vocal stylings that are clearly meant to evoke a 'female' version of HAL from 2001: A Space Odyssey (whose lead actor, Keir Dullea, has a minor role in this film as well). The choice may come across as jarring in places, as it slightly affects Montag’s character arc, but it’s also an invaluable world-building tool that sells the idea of an automated future deprived of free will quite efficiently.

Jordan conveys Montag’s journey well enough, but the real show-stealer, unsurprisingly, is Shannon. Perhaps due to his casting (Bahrani, who also wrote the script alongside Amir Naderi, previously used the actor to great effect in 99 Homes), Beatty’s role is substantially expanded, with a more complex arc that is ideal for Shannon’s trademark intensity, delivered through a healthy balance of underplayed inner struggles and explicit, loud menace. This Fahrenheit 451 may officially be a TV production, but the erstwhile General Zod is undeniably one of the year’s best film villains.