Beatrix Potter fan? Then you can't miss Where is Peter Rabbit? at Theatre Royal Haymarket this April.

The show brings some of Beatrix Potter's most beloved stories to the stage, with the tales of Jeremy Fisher, Jemima Puddle Duck, Mr Tod, Mrs Tiggy-Winkle and Peter Rabbit recreated through incredible puppetry, with original music from Stephen Edis. These stories are just as appealing and enduring for the modern audience as they have been for kids over the past century.

Our two co-reviewers, age six and three, were firm Potter fans who were familiar with every story – and they loved the show. Before it began, the three-year-old was hoping Mr McGregor (Matthew Whitby) would appear – he does, several times, looking appropriately intimidating in a mask with white beard – midway through, she kept tugging at my shoulder to make sure he was only going to put bunnies in the pie, and not children (our journey home required keeping the programme open to the page with Mr McGregor's picture, so she could stare at him). Mr McGregor was also the firm favourite with the six-year-old, and had many kids giggling throughout. 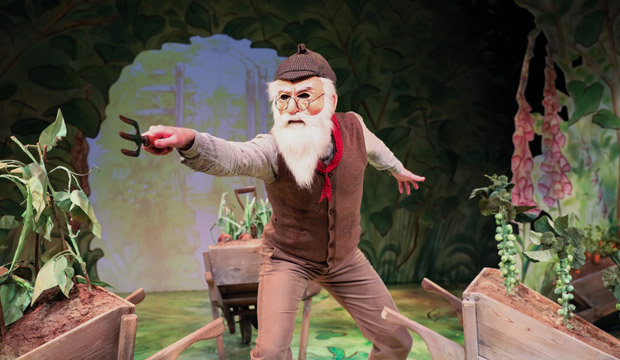 Beatrix Potter (played by Joanna Brown), also features in the show – she's a narrator, of sorts, who is looking for her lost picture of cheeky Peter Rabbit. Jemima Puddle Duck (gloriously voiced by Grace Osborn) is charged with flying in search of Peter, and the stories of the other characters are told along the way, with Peter Rabbit's tale finishing the 60-minute production.

For children who don't know the Beatrix Potter stories yet, the show provides a very pleasing introduction to her world, and it's fun to see how all of the characters tie together so seamlessly when they're brought to life. Those coming solely for Peter Rabbit might not see as much of him as they'd like – he really just appears in the final scenes, and we overheard an adult audience member saying she wished there'd been more of him.

Post-show, good luck trying to make it out the doors without purchasing some Beatrix Potter-related items (we succumbed). Choose from soft toys, pens, notebooks, badges and more. And, since you've already found the prized bunny, maybe you can skip the hunt this year....

Click here to book tickets for Where is Peter Rabbit? at Theatre Royal Haymarket 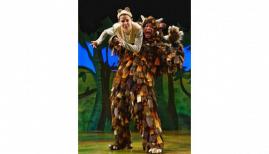