"Perhaps when I am famous and my diary is discovered people will understand the torment of being a 13¾ year old intellectual."

So sayeth Adrian Mole, the diarist who is easily as well known as Samuel Pepys, Charles Pooter or Bridget Jones.

In The Secret Diary of Adrian Mole Aged 13¾, the fictional teenager, created by novelist Sue Townsend, shares the trials and tribulations of growing up during the 1980s in Ashby-de-la-Zouch, Leicestershire.

He must contend with newfound intellectualism, a crush on posh Pandora, Barry the school bully, divorcing parents and a pimply chin - so many spots! The joy of the novel is the unmediated aspiration, despair and banality of Adrian's voice. It has inspired sequels, a TV and radio series, and a 1984 West End play, complete with songs, as well as this musical adaptation from Jake Brunger and Pippa Cleary, which first debuted in 2015, and is directed by Luke Sheppard.

Our co-reviewer, aged 8 3/4, was impressed at how faithfully the diary was recreated on stage, down to her favourite bits: the spots, the Pandora poems and the parental sagas, which were beautifully depicted in heart-wrenching songs performed by Pauline (Amy Ellen Richardson) and George (Andrew Langtree).

The show perfectly captures the humour and angst of adolescence, as well as a particular moment in time - 80s Thatcherite Britain - with plenty to appeal to both tweens and their parents. What really resonates is how Adrian's struggles are the issues young teens everywhere contend with, and the show feels so contemporary that you forget the characters don't have phones or social media obsessions. 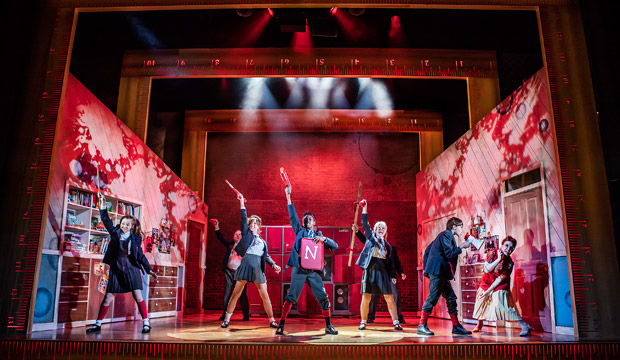 The stage reflects the diary format, with a ruler border and ink blot motifs. Humour comes in many guises: Adrian not quite understanding what's going on with his parents, his 'intellectualism' - and desire for a girlfriend, the adult cast seamlessly switching between parents, teachers, grandparents, fellow students and amorous next door neighbours. Performances have an exaggerated quality in keeping with the teenage perspective.

For our co-reviewing youngster, two things stole the show: the Nativity scene, which she loved for its "rebellious" qualities and costumes (a leather jacket teamed with fairy wings!), and the incredible young actors performing the roles of Adrian, Pandora, Nigel and Barry. There are four kids alternating each role - we saw Rufus Kampa as Adrian, Jeremiah Davan Waysome as Nigel, Jack Gale as Barry, Rebecca Nardin as Pandora and they were a captivating, energetic delight (we particularly enjoyed Pandora's feminist instincts and Adrian's endearing awkwardness and pomposity).

In fact, this musical is so appealing that it could just be the answer to inspiring the next generation to do something that's rarely done these days when not enforced by school teachers: write.

The good news is that there's still an option to score tix to this show as part of Kids' Week, where your child can go free. The musical is suitable for kids 8+ with some sexual references, so you may want to take over-10s.

Things to do in London this weekend: 1st - 3rd July
Sign up to CW’s newsletter
By entering my email I agree to the CultureWhisper Privacy Policy (we won`t share data & you can unsubscribe anytime).