Smoke and Mirrors: The Psychology of Magic, Wellcome Collection review ★★★★★

Smoke and Mirrors: the psychology of magic, at Wellcome Collection is an exhibition focusing on the link between magic and the mind

Such was the popularity of spiritualism, magic became big business, exploited by savvy entertainers for sensational live shows. Even now, when we know that performers such as Derren Brown deal in illusion and not reality, we continue to be transfixed.

This exhibition explores not only our fascination with magic, but also sets out the science behind the trickery, revealing that much of what appears to be happening in front of our very eyes is down to our psychology and the skills of conjurers, not the paranormal.

In 1882 the Society for Psychical Research – an early myth busting organisation that survives to this day – started to test the claims of clairvoyants and mediums, employing the help of magicians like Harry Houdini to expose the tricks of the trade. This research fed into psychological studies that investigated perception and how misdirection, sleight of hand and the powers of suggestion are used to exploit the natural workings of our minds.

There are some fascinating pieces on display here including a ‘haunting and poltergeist detection kit’ dating between 1920 and the 1960s and a colourful array of posters espousing equally colourful claims around clairvoyance and contacting the dead. Gradually, methodically, we are introduced to the strategies of deception, the examination of which has fed into psychological studies of how we perceive the world around us. 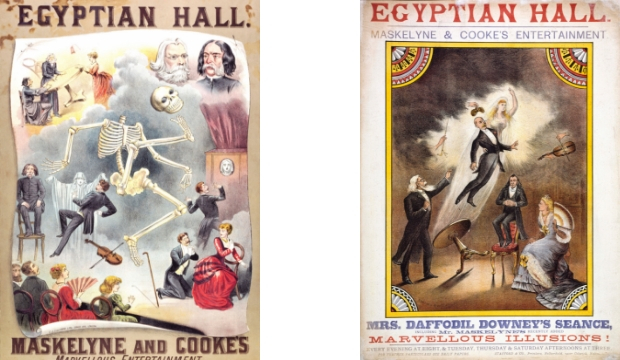 It might surprise visitors to learn, for example, that our brains operate on a time delay of a 10th of a second. This is how long it takes for our minds to process what we are seeing. Although we don’t notice this lag, the truth is that everything we are seeing has already happened, and to compensate our brains need to make predications about the future. Magicians use their knowledge of such psychological loopholes to their advantage.

Memory is also a key tool for conjurers and mentalists, and the study of this has huge implications on how we understand our interaction with the world. Memory is fallible and this exhibitions highlights how even our political biases can distort how we recall certain events.

We are also alarmingly vulnerable to the power of suggestion. An experiment – outlined in the last gallery – used a fake MRI scanner to convince participants that the machine was able to control their thoughts. The scanner was merely a prop, but people reported feeling as though numbers were being 'planted' into their brains.

This exhibition is fun. There are plenty of opportunities to pit your wits against the masters, to question your own beliefs and peruse the props of entertainers who have made their livings wowing stunned audiences. But there is a serious message here, too. In an era of fake news, political sabotage and digital manipulation, recognising our mental limits is more important than ever.