3 CW readers are interested
Christian Marclay, White Cube, Mason's Yard Christian Marclay, White Cube, Mason's Yard Emily Spicer
Christian Marclay is perhaps best known for The Clock (2010), a 24-hour video composed of clips from a range of well-known films. In each snippet the time is shown, as an actor glances at an alarm clock or wristwatch, or Big Ben chimes in the background. But viewers are not just witnessing time pass minute by minute in the realm of fiction. The video is synched to the local time, wherever the film is shown. So, as Richard Gere glances at the 12:05 showing on his radio clock, audience members can be sure that it is five minutes past midday for them, too.

At White Cube in Mason’s Yard, Marclay will present another video installation using thousands of cinematic clips, this time cropped from the bottom of the frame. 22 horizontal strips will be shown in a column, measuring 5.5 metres high. This melee – as is the case with many of Marclay’s creations – will tell a story of sorts, forming a ‘vertical poem,’ as he calls it, that will invite us to make our own connections and to form stories from the fragments.

The second part of this exhibition features thousands of images of the word ‘Look’, the simple, ubiquitous command painted on the road at London’s pedestrian crossings. Sometimes the sign will be clear, sometimes faded or obscured by falling leaves and urban detritus, so that the screen will seem to flicker with the changing image, like the pages of a flip book. Both films require us to look down and ponder the world at our feet.

Marclay's video installations typically make for compelling viewing. Watching The Clock certainly felt like a kind of madness. It will be fascinating to see how these new videos hold the audience's attention, and make us again question our perception of the world. 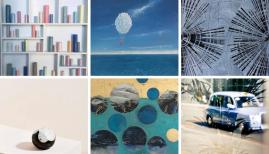