Everything on display in Oceania strikes an impact. In part because it’s all so unfamiliar, and in part because it’s all so exquisitely beautiful. It’s an intriguing balance and one that thrums at the heart of this ode to the kaleidoscopic range of cultures and art traditions native to Oceania; a region covering a third of the earth’s surface – mostly accounted for by ocean.

Take, for example, the two headed wood carved sculpture of Ti’i, a Tahitian God, dating to the early nineteenth century. With his two heads cocked at right angles from his fat, little body, he strikes a gruesome pose; yet his face bears a calm serenity rarely seen in wood-carving of the period. What terrifies at first, soothes seconds later. It's a masterful feat of creativity.

TRY CULTURE WHISPER
Receive free tickets & insider tips to unlock the best of London — direct to your inbox
Then there’s the Akua hulu manu, a feathered deity of the Hawaiian God Ku. Apparently, this monumental head with enormous bulging mother of pearl eyes and a set of razor sharp teeth was presented to Captain James Cook by the Hawaiian king Kalaniopu’u when Cook first arrived in Hawaii in 1779. Given its power to instill fear now, we can only imagine the terror pulsating through the poor man's body after months at sea. Yet the manu was a gift of extraordinary sanctity and value; in Oceanic cultures, a man possessing mana had 'dignity, authority and eloquence'. 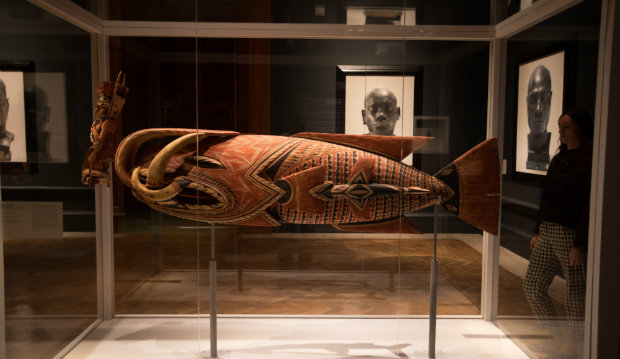 It was Cook and his merry band of men that first introduced these gifts, this so-called 'primitive art', to Europe. It didn't take long for big-wig European collectors and then, a century later, Modernists including Matisse and Picasso to line their prestigious collections with art from far away lands. A symbol of power, knowledge, supremacy, maybe. But anyone with even the crudest knowledge of Modigliani's swan-like necks and almond shaped eyes, Matisse's prestigious private collection or Picasso's Les Demoiselles d'Alger will question, albeit quietly, who is in debt to who.

Exploring the 'themes of voyaging, place-making and encounter', the art in this exhibition transports us through the little-known (in the UK in any case) social, cultural, artistic, religious and political histories of the South Pacific. Each and every object in this exhibition tells a fascinating, if totally unfamiliar, story. Unsurprisingly, water, tides, ocean travel, fishing, lagoons and lakes feature heavily in the thematic narrative.

But this exhibition is far more than a long-overdue exposé of South Pacific art and its influence on European art history. Oceania underlines, above all, that even the most unfamiliar, radically distinct art traditions tell the familiar tales of humanity. Our intrinsic need to cohabit, communicate, create and conquer is imprinted in every crack, stitch and pigment of the more than 200 artworks on display.

Broadly charting the same waters as Captain James Cook, Oceania spotlights the richness of Melanesian, Micronesian and Polynesian art for the first time in the UK for forty years, and exactly 250 years after Captain Cook set off for Oceania as part of his first Endeavour voyage. It's a visual feast of discovery and a timely reappraisal of the art of the peoples of the Pacific Islands. You may know nothing about Oceanic art on arriving, but you will leave wanting to know even more.