Dedicated to a select number of Claude Monet paintings of architecture, the exhibition explores the father of Impressionism's lifelong but previously unexplored preoccupation with structure. From the early Normandy paintings of the 1860s to his evocative depictions of Venice painted in 1912, Monet’s self-proclaimed ‘obsession’ with architecture is revealed in all its pictorial glory.

TRY CULTURE WHISPER
Receive free tickets & insider tips to unlock the best of London — direct to your inbox
Dreamlike renderings of historic French villages, idyllic seascapes and boating scenes populate the first three rooms of the exhibition. With ubiquitous lashings of jubilant light, pastel palettes and majestic subject matter, Monet, as always, seduces the eye. Depictions of historic churches, rustic cottages, and windmills abound: the artist's early preoccupation with the 18th-century English aesthetic resonates loud and clear. Providing balance, chromatic contrasts and a sense of scale essential to the drama of his landscapes, these picturesque motifs are a pure delight to behold. 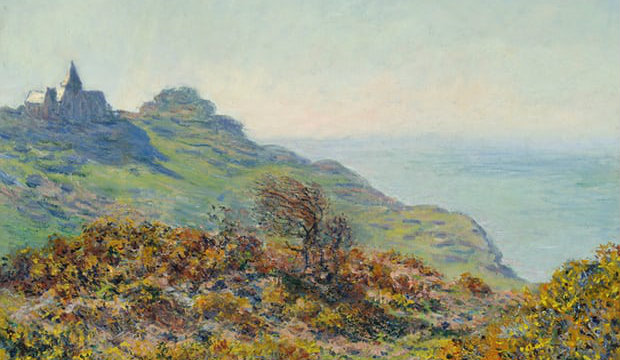 Claude Monet, The Church at Varengeville and the Gorge of Moutiers, 1882. Photograph: Columbus Museum of Art

But architecture mattered more to Monet than pure compositional aesthetic would suggest. An 1879 painting of the church at Vétheuil sees Monet play with architecture to reflect on both human nature and human fate. Dominating the dappled blue skyline, the medieval church rises magnanimously from the village below. Reflected in the expanse of glittering water, the structure adopts an otherworldly presence. As the resting place of Monet’s first wife, Camille, the church prompts nostalgic recollection. Here, architecture provides a psychological dimension to Monet’s art. The church evokes memory: it stands in for human presence, it honors change, evolution and development.

Although known for his en-plein air paintings of water lilies, gardens and the coasts of his native France, Monet, like his fellow Impressionists, chronicled the passage of time. Tracing an extraordinary arc through the art of one man, the exhibition unexpectedly explores architecture as both a marker of composition and of modernity. Following the 1867 Exposition Universelle, Monet sought inspiration from the evolving urban metropolis: iron bridges, billowing chimneys, locomotives, bustling boulevards and the chaotic ports of Rouen and Le Havre entirely absorbed him.

The Boulevard des Capucines, a rare loan from the State Pushkin Museum, is one of the most emblematic and brilliant measures of modernity in the exhibition. Monet’s broad, sweeping brush strokes evoke a flurry of movement, hasty exchanges – the hustle and bustle on the streets of Paris. Yet, the Haussmannian buildings looming large in the background provide a pleasing regularity that balances an otherwise frantic composition. Painted from a high vantage point, we look down from above at the boulevard below. Bathed half in light, half in shadow, the fleeting is captured for eternity.

While Monet's gritty, fragmented cityscapes depicting industrial urban development seem quite at odds with the genteel landscapes of the preceding galleries, they are emphatically modern pictures that position Monet as an obedient observer of his time. 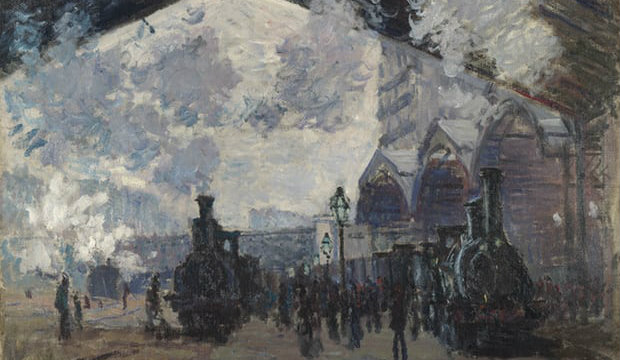 But Monet's interest in urban motifs waned as he left Paris for the rural village of Giverny. When he revisited the urban landscape in the latter stages of his career, his focus was different. As an old man, Monet explored the complex dialogue between architectural structure, atmosphere and light. The result – arguably the best paintings of his career.

During stints in Rouen, London and Venice in the late 1880s and 1890s, Monet painted his now famous paintings of Rouen Cathedral, the Houses of Parliament and Venetian Palazzi. In these formidable works, Monet used architecture to subtly different ends: in Rouen the cathedral facade served as a screen to record shifting light; in London, Monet was fixated by the effects of light and fog on the Parliament buildings; and in Venice it was the relationship of light with water that preoccupied him the most.

We see Rouen Cathedral painted four times, all from the West façade, but at different times of the day. Glowing blue, orange, dusky pink in the fragmented light, the Cathedral’s outlines – almost impossible to decipher – throb with emotion. For Monet, architecture is just nature in other media. 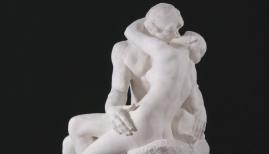