TRY CULTURE WHISPER
Receive free tickets & insider tips to unlock the best of London — direct to your inbox
Celebrated for his models of the human body and his ability to mould complex forms out of deeply pocketed clay, French artist Auguste Rodin remains one of the most innovative and revered realist sculptors to ever have lived. But it is little known that Rodin sourced much of his artistic inspiration from the Elgin Marbles. Juxtaposing Rodin and his ancient forebear, Pheidias, for the first time, The British Museum’s ground-breaking exhibition casts a new light on the sculptures we think we know so well.

From the outset, it’s a battle of two masters: Pheidias versus Rodin. The Kiss, The Thinker, The Age of Bronze are all there. But so are fragments of the greatest sculptures of all time. Tension licks the air, as we progress through heat after heat of this art historical competition.

Opening the exhibition is the ultimate sculptural showdown: a delicate white plaster cast of Rodin’s The Kiss from 1888 goes head-to-head with Rising Goddesses, originally sculpted for the East Pediment of the Parthenon. On loan from the Musée Rodin, Rodin's entwined lovers breathe an erotic sensuality that sends shivers down the spine. Caught in a passionate embrace, it’s easy to see why this silky white ode to illicit love scandalised Pairs. But Rodin’s display of free love is eclipsed by the old female figures sharing their pedestal. Swaddled in billowing drapery, exquisitely carved from hard marble roughly two and a half millennia ago, Pheidias' recumbent sisters seem to melt into one another. Headless, yet surprisingly intimate, this female duo showcases the power of the carved body to express emotion, movement and narrative. Rodin’s figures seem to retreat into the shadows. 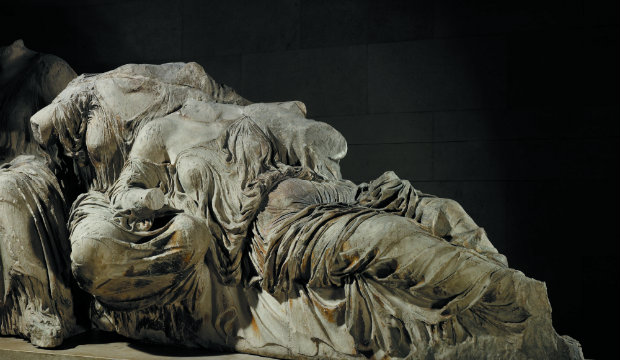 Rising goddess, figure K from the east pediment of the Parthenon, about 438 –432 BC.Marble. © The Trustees of the British Museum

Indeed, Pheidias’ unparalleled ability to capture motion and emotion in sculpture has inspired artists for centuries. Breathing drama into the rigid lines of classical Greek sculpture, Pheidias' fragmented relics writhe with energy. Head and Torso – a metope from the south side of the Parthenon – is contorted, pain stricken. The torso's awkwardly angled head evokes the flailing desperation of the falling youth, a movement later aped in Rodin's 1898 Funerary Spirit. Acknowledging Pheidias as his master, Rodin explored the body’s potential to express emotion throughout his life. Unsurprisingly, this evocation provides the narrative backbone of the exhibition.

The Burghers of Calais, 1889, with its six tortured figures, expresses torment like no other Rodin sculpture on display. Illuminated by shafts of natural light at the end of the recently developed Sainsbury wing, the ghostly shapes, walking to their death to protect their besieged city, take on an otherworldly presence. In the most Greek of all Rodin’s masterpieces, they move as one in silent procession, fear dripping from their very fingertips. Cast in bronze, this monumental tableau tells an eerie tale of sacrifice. Rodin has learnt from his master and excelled.

Elsewhere, sculpted faces, headless bodies, fragmented feet and hands showcase Rodin's interest in animated objects. Shunning the sleek lines of Neo-Classical sculpture, Rodin's fragmented casts are craggy, textured and overtly dynamic. Tense Left Hand, 1900, is among the most powerful on display. Crippled, yet visibly tense, the hand throbs with energy; it takes on a demonic life of its own. It's claw-like grip looks strong enough to crush anything in its way; no mean-feat for a plaster cast.

Rodin and the art of ancient Greece showcases over 80 Rodin works in marble, bronze and plaster alongside the Parthenon sculptures that inspired him and antiquities from Rodin’s private collection – in 1900 Rodin erected a museum in his garden at Meudon to house his growing collection of ancient art. Displayed at eye level as if they were in Rodin’s studio, the depth and breath of Rodin's creative process, and the true glory of the Elgin Marbles, are explored as never before.