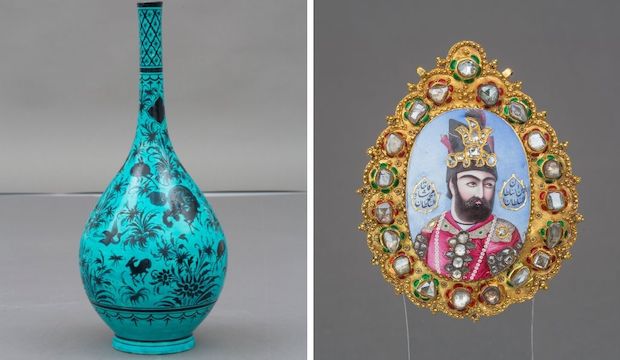 Crucially, the tide of influence didn't just flow one way. The back and forth between east and west is central to this exhibition’s narrative and it is surprising how far back this mutual influence stretches. Glorious silks from Iran were imported in the 1500s and were transformed into fashionable handbags. And while European travellers were making costume books of the fashions they witnessed in Turkey and further afield, the same was happening on the other side of Bosporus Strait. The Ottoman Court Painter Abdülcelil Levnî made caricatures of European dandies living in Constantinople (modern day Istanbul) in the mid 18th century, clearly fascinated by their flamboyant coats and cascading ringlets. 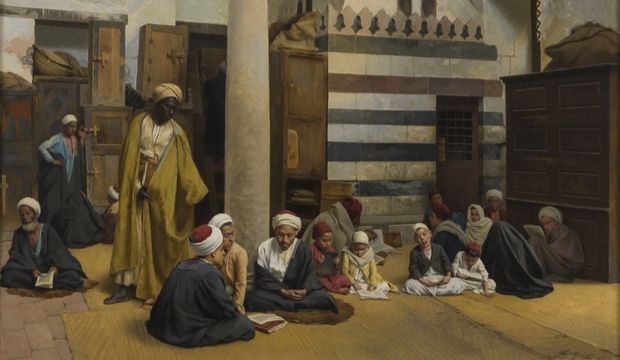 Another interesting point made by this exhibition is that the west became interested in the practises of Islam, in prayer and devotion, at a time when European religiosity began to wane. This is most apparent in 19th century paintings of mosque interiors. But there are no big loans here, no grand canvases by Ingres or Rubens (although one of his drawings is included), and nothing of note from Delacroix, save a nice portrait of seated man. Thus, the sexualisation of the exotic ‘other’ as seen through western eyes is played down. Images such Ingres’ creamy female nudes languishing in Turkish bathhouses are notably absent, sidestepping the western fetishisation of the east.

This exhibition brings to light many interesting cultural exchanges, but what it lacks is coherence and breadth. The story is muddled and what narrative that can be teased out, glosses over the colonial exploits that opened up the Islamic world to artists and fuelling the European appetite for all things ‘eastern.’

The exhibition concludes with contemporary reactions to orientalism with works by artists from the Middle East and North Africa. Lalla Essaydi’s Women of Morocco triptych will be in included alongside Inci Eviner’s 2009 video Harem in which a 19th century etching is animated by actors. These women bring a much needed female voice to an exhibition, which is otherwise a little disappointing.