The British Museum explores the story of Troy, from antiquity to the present day

11 CW readers are interested
Troy: Myth and Reality, British Museum review 4 Troy: Myth and Reality, British Museum review Emily Spicer
‘Sing, Goddess, sing of the rage of Achilles’; the most famous tantrum in literature opens Homer’s Iliad, the epic poem immortalising the ten-year-siege of Troy. Achilles, enraged at Agamemnon for stealing his war-prize concubine, sets in motion a chain of events which results in the death of his friend Patroclus, the slaying of Hector, and the eventual destruction of the city.

Human emotions animate the myths surrounding the Trojan war. Desire and pride clash with fate and divine will in a dazzling and tragic saga which has captured imaginations for 3,000 years. Now this bone-shuddering, blood-soaked drama has come to the British Museum.

Around 300 objects explore our fascination with Troy from antiquity to the present day in Troy: myth and reality. The exhibition begins much like Homer’s first line, with a painting of a bloody spear, drawn violently and smothered with crimson impasto, welcoming visitors. Cy Twombly’s The Vengeance of Achilles (1962) reduces the hero’s infamous wrath to simplistic terms, yet the frenzied rendering of this bellicose image betrays an inner turmoil, hinting, perhaps, to the character's inherent vulnerability.

After this contemporary prelude, we delve into the treasures of the classical world which depict a pantheon of heroes and deities in scenes largely following the narrative of Homer's Iliad and The Odyssey. They bicker, scheme and fight sandal-to-sandal, and at the root of it all: a woman. Helen, ‘the face that launched a thousand ships’, exchanges furtive glances with the Trojan prince, Paris, on Roman frescoes. Eris, the winged goddess of chaos who uses an apple to stir things up between between Hera, Athena and Aphrodite, grins mischievously on a plate. The Acheans lie in wait in a Trojan horse at the gates of the city on an Athenian amphora. The dreaded Achilles beheads Troilus on a water jar. 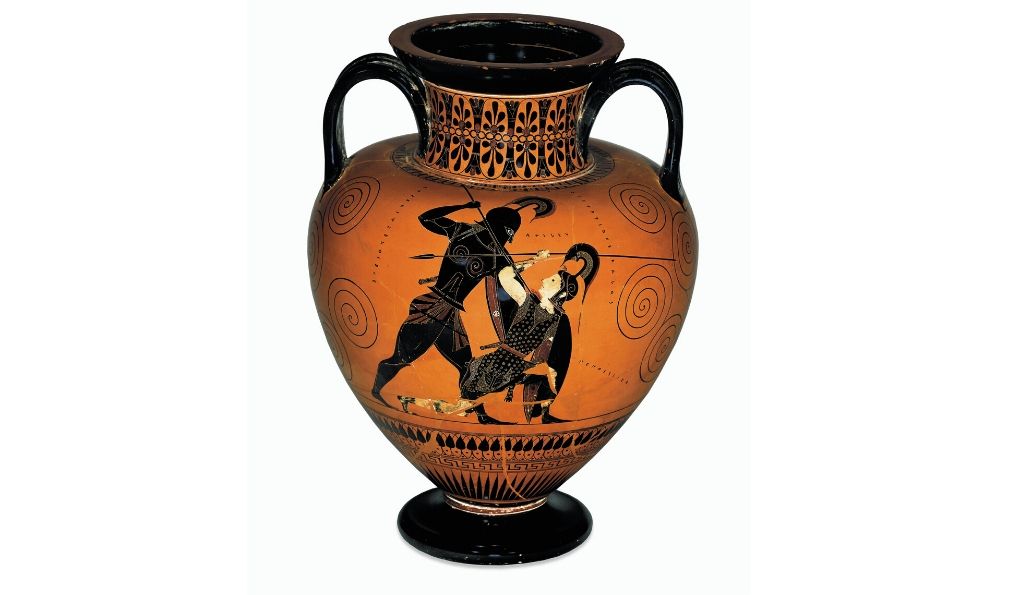 Although the exhibition's title promises to give equal weight to both ‘myth’ and ‘reality’, there is only a brief pause from the fictive to ponder Troy as a real place. A small section is dedicated to artefacts excavated by Heinrich Schliemann, the German businessman who discovered the site of the fabled city in what is now modern day Turkey during the late nineteenth century. Apart from some curious jars shaped like owls and hedgehogs, these archaeological finds pale in comparison to the art inspired by the myths.

It is the imaginative power of Troy which fascinates. The second part of the exhibition is devoted to the rich afterlife of the Trojan story from Shakespeare to Hollywood. Like Rome and Jerusalem, Troy represents the ideal city, imagined as an architectonic model of a glorious metropolis, blessed by the gods, and tragically lost. Text, as well as image, is at the heart of the curation, and a number of medieval and Renaissance codices on display reveal the importance that Trojan myths held in the construction of British nationhood as poets and philosophers attempted to trace Britain’s lineage back to the ancient city. It is particularly telling that the first book ever printed in English is William Caxton’s The Recuyell of the Historyes of Troye (1473), which is among the rare texts in the vitrines on loan from the British Library.

At times, it is deeply moving to see how the story’s complex characters have eternally resonated throughout the centuries. Thomas Banks' 1789 sculpture Thetis dipping Achilles in the River Styx tenderly depicts a mother holding her son by the heel as she lowers him into the water. Despite her efforts, the heel is the only part left unprotected and leaves him fatally exposed. This image is made all the more heart-breaking with the knowledge that it was commissioned by Jane and Thomas Johnes, a couple who had lost their infant son. Bravado sculpture is seen again in Filippo Albacini's astonishing life-size marble The Wounded Achilles (1825). The hero lies on his shield, pierced by an arrow through his heel, his lip curled in an expression of agony and shock and eyes raised heavenward, as if he were cursing the gods who once protected him.

This epic exhibition is one of Homeric scale, with a vast ocean of scholarship which makes for thrilling navigation. 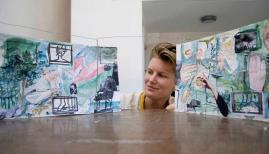