11 CW readers are interested
Buddhism exhibition, British Library review 4 Buddhism exhibition, British Library review Emily Spicer
Buddhism is the world's fourth largest religion, with an estimated following of 500 million people. It started in India between the fourth and sixth centuries BCE and, via word of mouth, beautifully illustrated manuscripts and printed pages, spread throughout Asia. These fine works are now the focus of an exhibition at the British Library, which explores the story of the Buddha and his following, with a colourful exhibition of treasures spanning 2,000 years and 20 countries.

On entering the galleries, visitors will find themselves immersed in a soundscape of birdsong and trickling water, designed to soothe and inspire. It highlights, too, the value Buddhism places on the natural world. The tale of Buddha's life is told through sumptuous illustrations dating from 19th-century Burma, with a panoramic piece stretching for seven metres, showing Prince Siddhartha setting out from his opulent palace. As he leaves he steals a final glance of his wife and son, before riding into the night to follow the path to enlightenment. Through meditation, he became the Buddha and dedicated the rest of his life to teaching others to do the same. 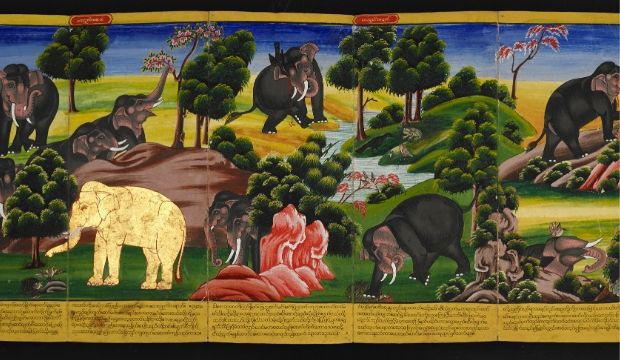 Scenes from the Buddha's previous incarnations, in a 19th-century Burmese manuscript. Photo © British Library Board

There are many gilded paintings made of materials ranging from paper and silk to bark leaves and ivory. Another glorious example illustrates the story of one of the Buddha's 547 lives. Here, a golden elephant protects a tiny bird's nest from harm, only for it to be destroyed by an evil member of the herd. But karma (another pillar of the faith) strikes, and the birds get their revenge. Such tales promote important virtues. There is also an intricate and playful temple hanging, commissioned by the British Library and executed by three artists from Sri Lanka (Irving Chan Johnson, Lim Su Qi and Rungnapa Kitiarsa). Among the medley of colourful characters are two British policemen and a cameo from Shakespeare.

Aside from delicate miniatures, there are gleaming statues and prayer aids, bejewelled books and manuscripts on palm leaves, the most ancient of which dates back 1,900 years. Over the centuries Buddhism has given rise to some remarkable cultural achievements, architecture being among the most impressive, and not enough is made of this. It would be good to see models of temples, aside from the tiny replicas of stupas (shrines), or perhaps images of these impressive places of worship. But all in all, this is an enlightening exhibition, and well worth exploring.