Donna Zakowska, the costume designer for the Marvelous Mrs Maisel, tells us just how and why the show came to be so striking 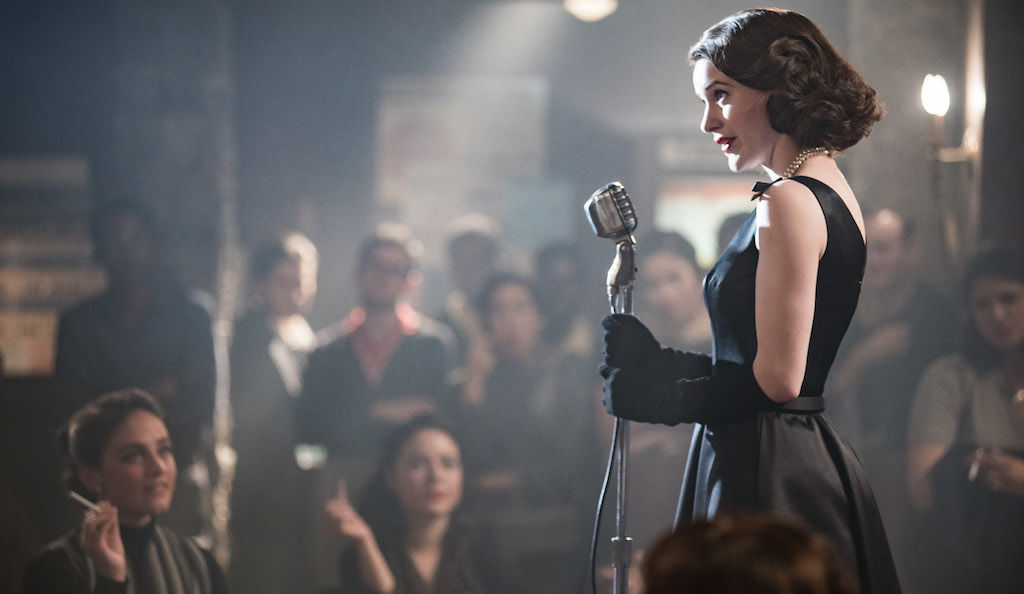 The Marvellous Mrs Maisel costume design
It's a rare but wonderful thing, when a TV show or film gets to be as idolised for its aesthetic as its script. Would Wes Anderson's movies, or the seven seasons of Mad Men, have attracted such a cult following without their intelligent, sleek, glamorous appearance? It's a question that must also be asked of this year's big Golden Globe award winner, and the surprising Amazon Prime breakthrough TV show, The Marvelous Mrs Maisel.

TRY CULTURE WHISPER
Receive free tickets & insider tips to unlock the best of London — direct to your inbox
The series, written by Gilmore Girls creator Amy Sherman-Palladino, began life as a pilot show on Amazon. Its first season was voted into production by Amazon subscribers, and the series – which follows an Upper East Side Jewish woman whose husband leaves the family home for his secretary – has been an astonishing success. It went on to win the Golden Globe for Best Comedy TV Series and Best Actress in a Comedy TV Series this year, and the crew are currently in the conceptual stage of season two.

Shocking pink coats clash dramatically with skin-tight purple dresses, swathes of black silk skim slim ankles, bright cocktail hats and matching blue gloves sharply interject pastel fabrics. The outfits in The Marvelous Mrs Maisel are not only to die for, they're integral to our unflappable, perma-glamorous protagonist Mrs Maisel (or 'Midge'), who finds empowerment as both stand-up comic and as a stylish shop assistant in a fancy New York department store. 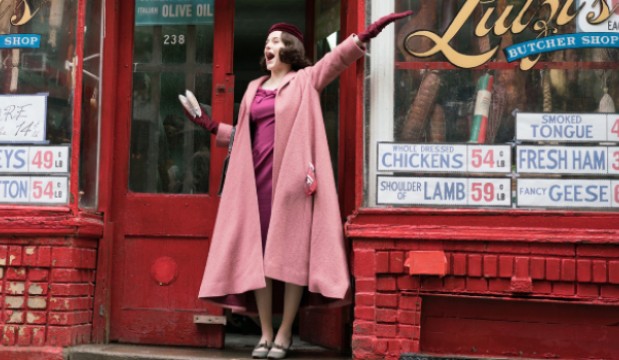 The head of costume design, Donna Zakowska, previously won an Emmy and Costume Designers Guild Award for the 2008 miniseries John Adams, and yet one gets the feeling that The Marvelous Mrs Maisel will be her crowning accomplishment.

'It’s always fate, on some level,' Zakowska told us about choosing to work on the eight-part series. 'I had met the director, Amy Palladino, and it was an instant chemistry. I’m a New Yorker and I loved the idea of working on a series about New York in the 50s. I've done eighteenth-century clothes, and earlier periods, but we have such clichés in our minds of what that period [the 1950s] looks like. It was a challenge to make this clothing interesting and exciting to people.' 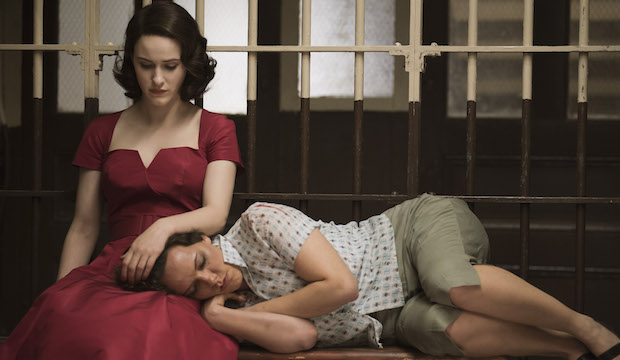 For every character, in every TV show of film, outfits are important in telling the story of the person. But this is particularly true of Midge Maisel, who thinks and talks a lot about fashion throughout the series. 'From the beginning, Amy Palladino had a very strong feeling about this character,' Zakowska explains. 'She's someone who, even if she [Midge] is depressed, you would never know it in terms of her physical appearance and her clothing. 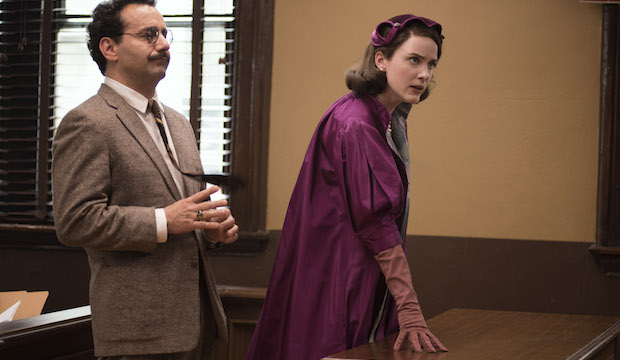 There are some standout outfits throughout season – in particular when Midge wears combinations of clothes for an intended effect. There's the busty red dress Mrs Maisel wears to greet Joel, her wanton husband, the first time he returns to the house after leaving her and the children. It's worn like armour, specifically to remind Midge of her own strength, as much as it is designed to make Joel regret his transgressions. And then there's the wedding dress, which appears in the first scene of the show when Midge's character is introduced, that Zakowska tells us 'was Audrey Hepburn inspired'.

But for the most part, it is as Zakowska says 'the overall outfits, the rhythm of the colour and the palette' that is so compelling. 'My favourite outfit is the palette' she explains. 'How we express Midge with colours, how they change into grey and bluer tones. It's the punctuation to the story and the colour... this is bigger thing than one specific thing.' 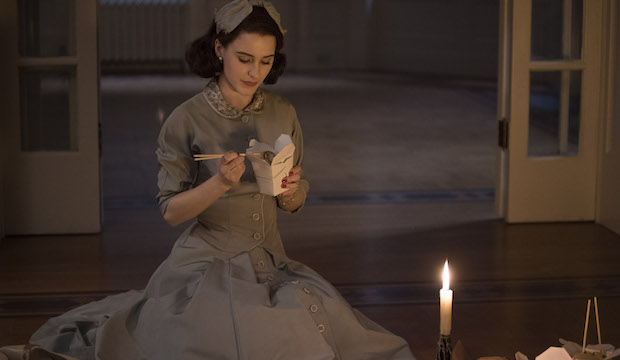 The colours of the clothes are unexpectedly bold, and not what we've come to expect from depictions of 1950s fashions. 'Well, when you really look at Vogue from the period, from 1957, 58, 59, these vibrant colours are there', Zarkowska says. 'I was a little bit shocked by these interesting, amazing combinations – it's not the quintessential way we think of the 50s. But, when we think of the 50s, are we thinking of the Midwest? This is really trying to make it look urban and New York, trying to show a European influence.

'French Vogues in general were very exciting then. This is a time of period couture, and then couture going downward, when people were trying to imitate it. You'll see in New York this tremendous influence of fashion. I can't tell you how many magazines from 1957 I looked at with that combination of colours [bright pink and red]. It's not what we have in our minds, but it's still true.' 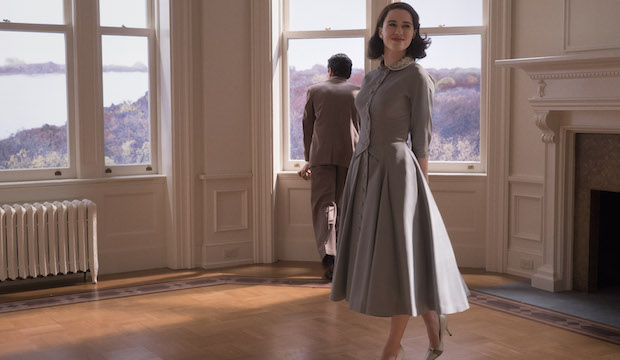 Zakowska tells us she spent much more time flicking through the magazines of the period than taking inspiration from that other famously beautiful TV series Mad Men, which she claims she 'never really bothered to look at', adding that their 'sets and costumes work is a much more graphic stylisation'.

It's a good moment for us to be talking about 50s fashions, as Daniel Day-Lewis' latest Oscar-bait film Phantom Thread floods our cinema screens with a very different vision of fashion from the period: that of dizzying patterns and regal, floor-length silhouettes.

There's no doubt that Zakowska is both in love with the 50s: 'where you had these incredible poets and painters, and everything is happening in Lower Manhattan', and most of all, The Marvelous Mrs Maisel creator Amy Palladino, about whom Zakowska can't help but gush. 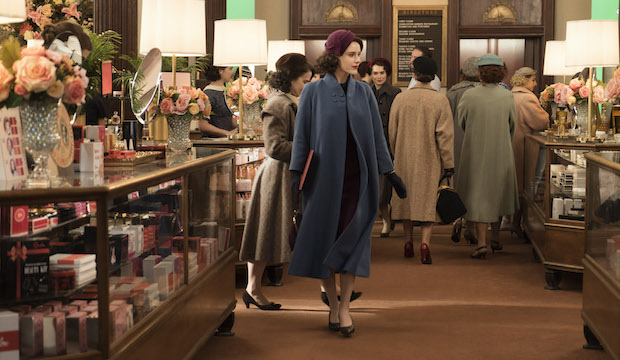 'Amy – it was great working with her... she was very high energy and loves the characters. It’s a little bit like female Woody Allen – it’s a bad word at the moment', she adds with a knowing giggle, 'but in Amy's sense of dialogue and humour, she really lives it and she lives the scripts. She’s such an enthusiast and such an energised person that it makes it fun – she really enjoys it. That helps a lot'.

As we approach season two, and Midge's life continues to go through changes, will her outfit choices morph to reflect that? 'We don’t move super quickly in time, [season two will] begin where we left off, which I think is good. 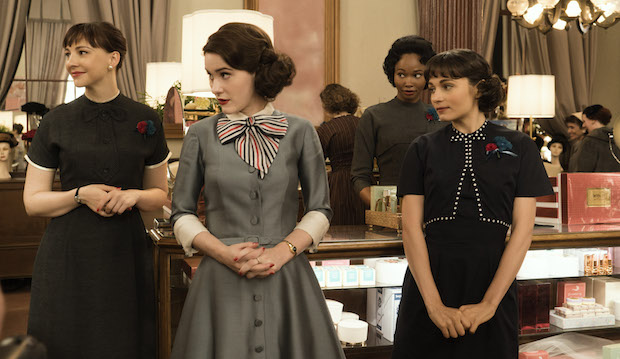 'We’re going to go into spring and summer next season. We really deal with comedy outside of the New York environment. There will be more of a lightness to the clothes, and she [Midge] will be involved in more physical, aesthetic types of things. So that will be very different, the whole weight of the clothes and the colours, everything will become really different.

So Zakowska returns to her preparations for the second series, with fabrics being brought in from London, France and of course New York, and the first fittings and modifications to begin. 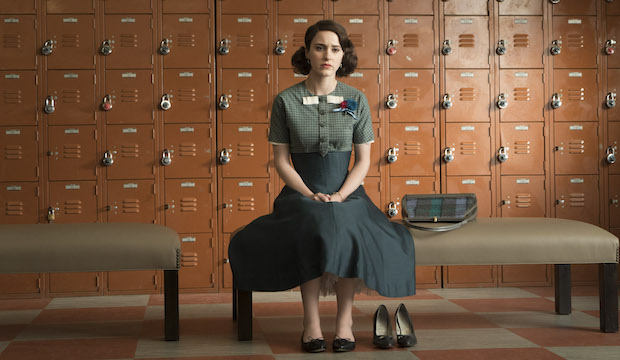 It's a creative challenge that Zakowska rises to by attempting to embody the spirit of our brave, independent protagonist: 'I always think: ‘if I were midge what would I wear’. You always have to get out of yourself and out of your own personality. This is always true in fashion design. you have to become that person.'

We can't wait to see what Mrs Maisel gets up to, and wears for us, in season two. 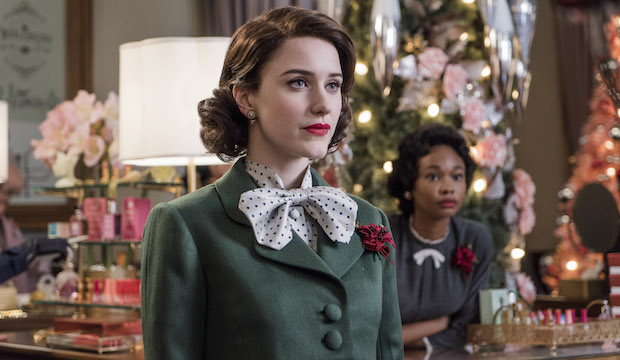 The Marvelous Mrs Maisel is available on Prime Video now