Based on Liane Moriarty's bestselling novel of the same name and scripted by veteran cinema and small-screen writer David E. Kelley, Big Little Lies arrives on Sky Atlantic this month. The jaw-dropping Hollywood cast includes Reese Witherspoon, Nicole Kidman and the gloriously hunky Alexander Skarsgård of The Legend of Tarzan fame (you can read our interview with here).

You couldn't dream of a better cast. Even a few years ago, who would have thought that A-list talent such as this would be falling over itself to appear on the small screen? But there we have it: the future of film is in excellent TV.

The seven episodes of this high-class drama offer a stretch of time broad enough to flesh out the dark deeds and competitive behaviours that lurk under the surface of America's manicured upper middle classes. It seems to us that those meandering, slow melodramas (Desperate Housewives-style) are a thing of the past.

Set in California (instead of the novel's Australia), the story focuses on best friends and stay-at-home mums Madeline Martha Mackenzie (Witherspoon) and Celeste Wright (Kidman) and their ostensibly perfect lives within an affluent, beautiful, beach-side community in idyllic Monterey. 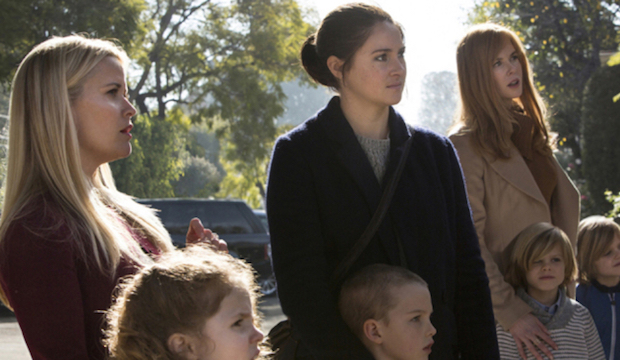 Newly arrived single mum Jane (Shailene Woodley, from the Divergent series) is welcomed into the fold when she first arrives at the school gates, but her appearance soon unleashes a chain of events that lead to a murder.

Under the perfect veneer of Monterey, where everyone is friendly and sexy, fissures and tensions expand then explode: 'Things never blow over. They blow up. Boom.' Is it possible that the perfect life is a perfect lie? Could these differences between competitive moms really have led to a murder?

Expect a thrilling, tightly-woven script, the slow drip of domestic conflict, lots of shiny cars, clothes and hair and a stellar performance from Witherspoon. You might begin to wish your life was like theirs – but soon you'll be grateful it isn't.

The reviews rolling in from the States have been excellent. So, this Monday, be grateful you don't have to travel to the cinema to watch the best thing on our screens. This is going to be one of the most talked about TV shows of 2017.