Catastrophe season three is a medicinal reminder of the messy reality of marriage and children, which will have you guffawing and groaning

Right now, Delaney and Horgan are our favourite double act. After making each other laugh on Twitter, they met, laughed some more, then co-wrote and starred in Catastrophe, telling the story of Rob and Sharon based on their own respective marriages and parenting adventures. (They are not, despite crackling chemistry, a real-life couple).

When the show was picked up by Channel 4 we all guffawed at the no-strings sex in season one, groaned and grinned through the comedy of relative strangers committing to raise a child together, then sighed with relief when the second series resisted a tame happily ever after.

Season three is as unflinching as ever. Jokes lacerate niceties to create a relationship that is as relatable as it is kooky. But now that relationship is at risk after an extra-marital fumble and a receipt for the morning after pill.

This is not TV infidelity as we know it. In place of passion, violence and intensity is an honest, un-sexy and anticlimactic mess.

Sharon is guilty (‘I probably touched my children with fresh penis on my hand’); Rob is suspicious and hacking into his wife’s emails (to find her enquiring about nipple hair electrolysis). It comes to blows in hushed tones in the children's hospital ward.

The rest of the season unravels as Rob struggles to find a job, contends with selling the family home and finally returns, tail between legs, to the old company he loathed. Sharon has her own trials: a hapless brother, a father with dimension and the juggle of returning to work with two under-fives. Against the self-contained humour of each episode there is an understated regression as the recovered alcoholic Rob reaches for the bottle, disguising gin fumes with self-denial and the overpowering odour of cheese and onion crisps.

Expect a volatile series finale, featuring the final TV appearance of Carrie Fisher as Rob's acerbic American mother. Fisher filmed the final episode of Catastrophe, in which she plays Rob's mother, just days before her death in December 2016.

With trust, money and addiction issues thrown into the chaos, Catastrophe is a glorious antidote to the bland barrage of insta-filtered #relationshipgoals, a medicinal reminder of the messy reality of parenthood and a sanity-restoring fingers up to the having it all myth.

The final episode of Catastrophe is on Channel 4 at 10pm, Tuesday 4 April. Catch up on seasons one, two and three here. 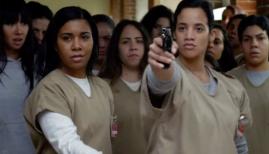