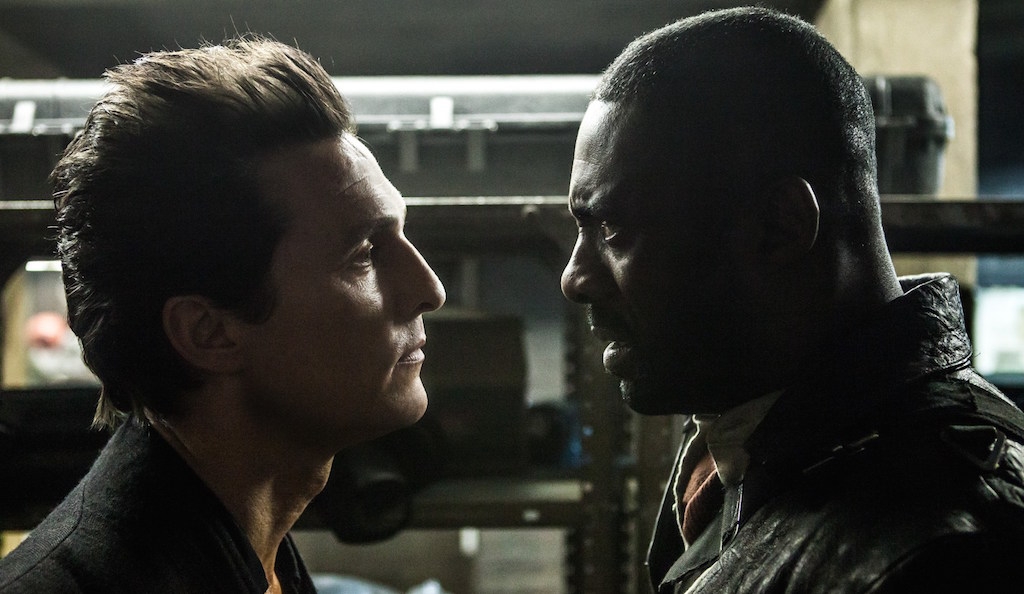 The Dark Tower – Idris Elba, Matthew McConnaughey
The first trailer for The Dark Tower is here, and everyone's got a reason to be excited.

Idris Elba is The Gunslinger. Matthew McConnaughey is The Man in Black. Both are smouldering harder than a charcoal factory. But how to decide who smoulders hardest?

The only solution (trust us) is to compare the two actors' various screen performances. Not the conventionally sexy ones – not Luther and True Detective, not Magic Mike or Bastille Day – but the other ones, the ones that should be resolutely un-erotic. The ones that do their best to dampen the spark generated by these two towering sex-symbols.

Elba and McConnaughey's ability to be sexy in such circumstances isn’t in question. The questions are: who manages to be the sexiest, despite everything? Whose charisma burns brightest in the darkest hour? Which swaggering man-mountain peaks at the highest altitude? And how much can we objectify these poor men before shame kicks in?

We'll be honest: we haven't seen Daddy's Little Girls. It didn't look promising, though – the title in particular is vaguely sinister, and even Idris Elba can't rock a boiler suit.

But the boiler suit comes off. It comes off, people! And underneath, Idris gleams. He completely nails this first round.

Gah. No. This isn't pretty. Everything about this has absolutely zero allure. McConnaughey barely even looks like himself. He's more of a deranged Chris Pratt, or a sweaty Steve Irwin. And then there's the acting.

For those of you who don't want to watch a clip called 'Texas chainsaw massacre 4 (1994) - Best scene', we'll just transcribe the noises that McConnaughey makes: 'NaaauuugghhhhahahahaahaHAHAHAUGHMmmoooooooooOOOOOOO!!! UNGH-UNGH-UNGH-UNGH-Oi!-Oi!-Oi!-GGRRRRHHHHHH'. Then he slaps himself in the face.

This is just Idris Elba looking like a giant gold stag beetle. Beetles aren't sexy, Idris. Sorry. Maybe he thinks he can get an Academy Award by dressing up as an insane mutant Oscar?

It's not a complete loss, however. The gold contact lenses are rather fetching.

And yet... God help us, but the combination of those elements has a sort of rogueish, post-apocalyptic-biker appeal. Or no? Probably no. But if you like your men testosterone-y, then this tattooed and froth-mouthed brawler might be for you. You lunatic.

Hmm. The problem isn't so much the dodgy accent as the dodgy hairline. Not sure what's going on here, but it doesn't work for us. Maybe we're just uncomfortable about objectifying a complex and beloved political figure?

Still, we might be able to get behind this if not for Elba also playing 'old Mandela'. The make-up department on this film have done wonders, but he still looks half embalmed.

If you're ever feeling depressive, just Google the premise of Tiptoes, a movie that almost claimed the careers of Gary Oldman, Kate Beckinsale, Patricia Arquette, and Peter Dinklage. These stars stepped into a maelstrom of cinematic awfulness, and McConnaughey, ever the hero, stepped in with them.

But: he looks like an actual Ancient Greek statue come to life.

A dead-heat. A draw. Both Idris Elba and Matthew McConnaughey are awarded 10 points each. And who, among us, is surprised? Who doubted that their wattage would go equally undimmed (more or less)? No one. This whole exercise has been futile.

But the result bodes well for The Dark Tower, which doesn't appear to be placing many limitations on its stars' super-nova brightness. Elba and McConnaughey get to dress in black, they get to mumble cool lines, and – most importantly – they start on equal terms, at equivalent temperatures of pulsing hotness. Now: wrestle!