Isle of Dogs, Wes Anderson's new stop-motion movie lands in cinemas at the end of March: here's a list of reasons fans should be cheerful about the Texan director 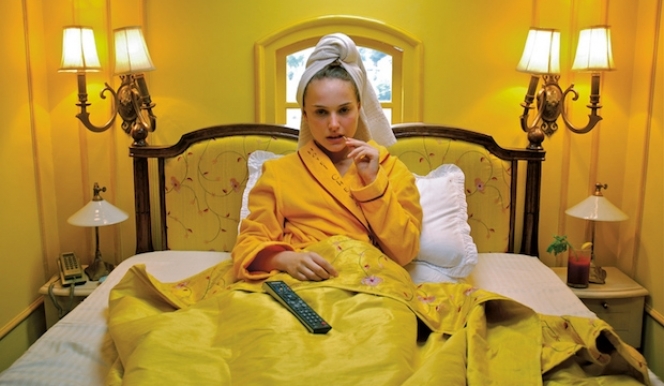 Ten things we love about Wes: a guide to Wes Anderson
Wes Anderson, the Texan writer and director with an eye for the idiosyncratic and a taste for the formally experimental, is back. Everyone wondered what would come after The Grand Budapest Hotel, and after taking the longest break between the release of films since the start of his career he's releasing Isle of Dogs in the UK on 30 March.

Here's what we know: It's a stop-motion film set in a dystopian near-future on an island off the coast of Japan, where the nation's dogs have been quarantined after an outbreak of "canine flu". It follows one 12 year-old boy's quest to rescue his lost dog, Spots. The cast is a veritable all-star lineup: Bryan Cranston, Jeff Goldblum, Scarlett Johansson, Tilda Swinton, Edward Norton, Bill Murray and Yoko Ono - those are just a few of the celebrities who made it on to the poster. Expect kooky canine capers with the same artistic flair that made his last stop-motion flick, The Fantastic Mr Fox, such a joyous affair.

His films are often described as quirky, but to stop there is to fall short of opening a box containing a multitude of delight and detail... 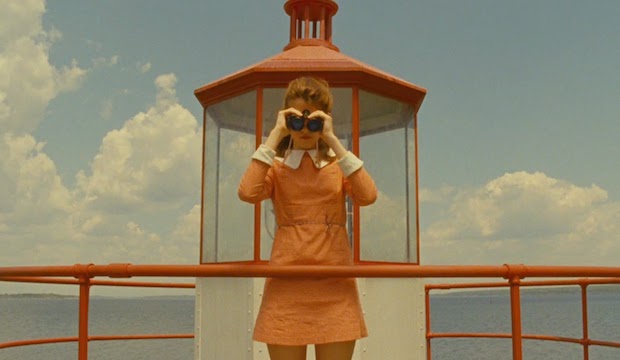 Anderson’s pictorial method is famed. Of all the scenes in all the new films out now, it is Anderson's scenes that have the most 'perfect' balance and composition of fine art and the playful delineation of the abstract modern. He has a Texan’s eye for horizons and an adopted New Yorker’s enjoyment of vertiginous perspectives.

Many prefer to watch films shot in the cinema vérité tradition, and the amount of carefully choreographed detail in a Wes Anderson shot represents a fastidiousness that some find fussy. But it is more than just pictorial eloquence. Anderson’s frames are the places in which his characters live, and define their divisions and relations. As the wayward Dignan tells his becalmed friend Anthony in Anderson’s first film, Bottle Rocket , ‘You and I respond to structure - that’s what’s important to us.’ 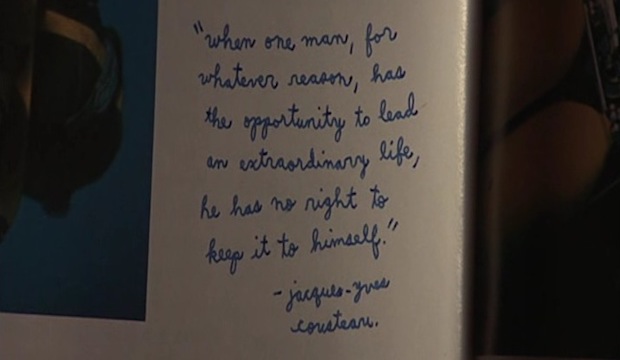 If pictorial constructions frame the visual dimension of his films, a literary sense frames time. Narratives nest within narratives, stories are segmented into chapters. Time is chopped, telescoped and looped, rendered meaningless. The Grand Budapest Hotel is a tale told to a writer being read by a girl being watched by a viewer, and right at the centre, contained like a scene in a bauble of snow, is the building itself, within which all the stories begin.

As always with Anderson form is as important as content, in fact you could say form is the costume of content. So it’s no surprise that he is renowned for his use of typefaces. Particularly associated with the simple symmetries and geometric elements of the ‘30s Futura font, he also loves to use the italicised inscriptions, and inspect people's handwriting, from Max Fischer's elegant calligraphy to childish sincerity of Suzy and Sam's love letters.

For The Grand Budapest Hotel, he made a striking departure and used Archer, a typeface designed by the renowned Hoefler & Frere-Jones foundry in New York. It’s a weighty but characterful font, like M. Gustave himself, which hints at the baroque with its bold serifs and teardrop terminals. It is yet another example of how the finest points of detail in a Wes Anderson film contribute to the total effect. 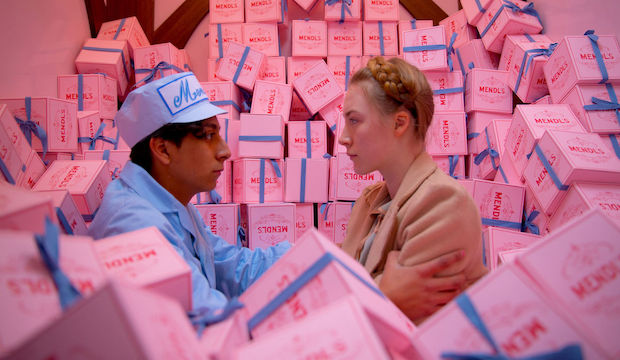 What do you do with all that detail? How do we organise the things around us? What do they mean? Where do we put them? Anderson’s characters list them, pack them, hoard them. They are people defined by their impedimenta, and how they structure the material requirements of everyday life is a substantial ongoing theme.

Those that are most successful are those who best manage and organise the things around them: Fantastic Mr Fox and Max Fischer in Rushmore are both great stage managers, but it is the boy scout Sam Shakusky in Moonrise Kingdom and the concierge M. Gustave in The Grand Budapest Hotel who are the supreme facilitators and organisers, maintainers of their systems against the onslaughts of the world in which they live. 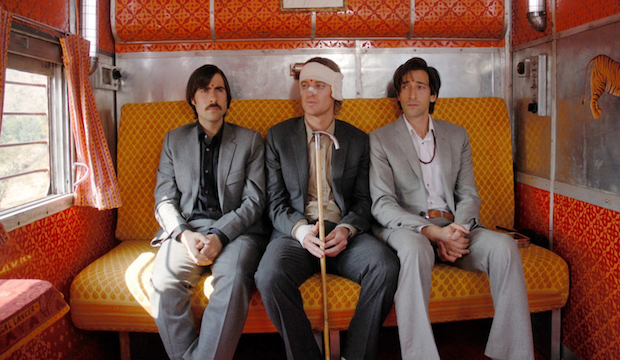 Clothes are the most familiar version of this depiction of character through objects: institutional uniforms, theatrical costumes, disguises, hats, caps, shirts and shoes, sports gear and formal attire, those magnificently broadbreasted suits worn by male authority, the inexplicable palettes that seem to divide colour against itself (Bill Murray’s khaki shirt and tie in Rushmore sticks in the mind).

Clothes in Wes Anderson are statements of environment and distinction from that environment. Never more egregiously superb than in The Royal Tenenbaums , they always provide a sort of awed wonder. Gwyneth Paltrow's Fendi fur coat is iconic. Presumably the only reason the Whitman brothers are dressed in subdued grey suits throughout The Darjeeling Limited is that Anderson feared he’d lose them against the riot of colour exploding in the rest of the film. 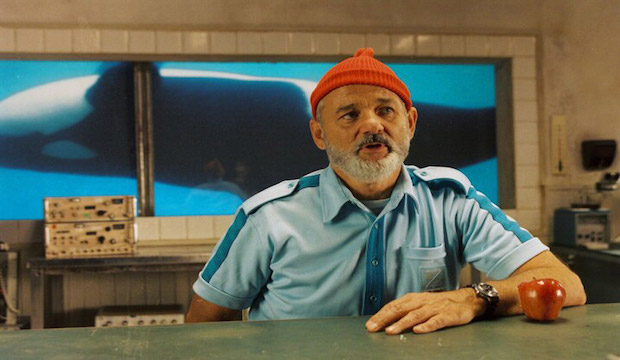 The finest actors of recent times queue up to work with Anderson again and again. Angelica Huston, Gene Hackman, Luke Wilson, Ed Norton, Ralph Fiennes, Gwynneth Paltrow, Tilda Swinton, Harvey Keitel. Two are associated with him more than any other – Bill Murray, melted and mottled by cynicism and sour good humour, and Owen Wilson, innocent-faced, confused by life, too easy-going for the world.

But most of all it is the young – the quizzical, optimistic, awkward and relentless children and teenagers that march defiantly through his films with upward-turned, scowling faces – who exemplify Wes Anderson’s peculiar spirit. They redeem those around them, refresh and subvert the authoritarian structures in which they find themselves. 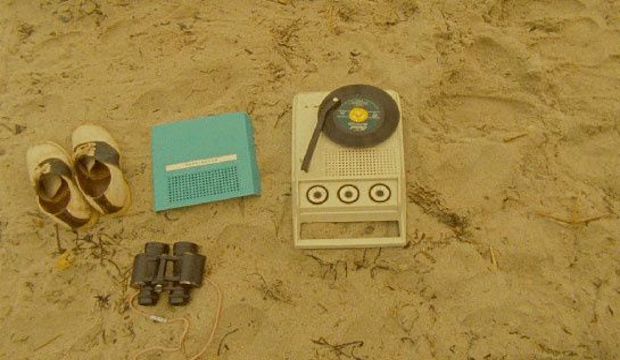 A remarkable partnership with musical supervisor Randall Poster has provided some of the best moments in Anderson's films. Rushmore’s English heart beats to the Rolling Stones, John Lennon, the Kinks, Faces,and the Who. The Bobby Fuller Four reverse that polarity for the adaptation of Roald Dahl’s Fantastic Mr Fox . Poster went to the enormous trouble of digitising Indian master filmmaker Satyajit Ray’s soundtracks for The Darjeeling Limited.

But it’s Moonrise Kingdom where the role of music in his films is taken to another level entirely. Noye’s Fludde (Noah’s Flood), Britten’s song cycle for amateurs, provides not just the context for the first meeting of Sam and Suzy but for the entire film. It is a curious, unearthly set of sounds to associate with the New England landscape and gives the film much of its force. However, it is not Britten, or the Hank Williams songs which also feature, but Françoise Hardy’s ‘Le Temps de l’Amour’ that gives the film its enduring image. Sam and Suzy, uncharacteristically almost without clothes, dance on the beach to the song, which is playing on a cheap record player. It’s an intimate, touching, memorable moment, depicting innocence and seduction in a newly found land. 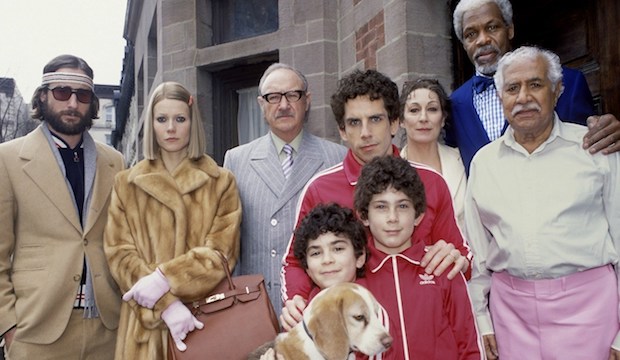 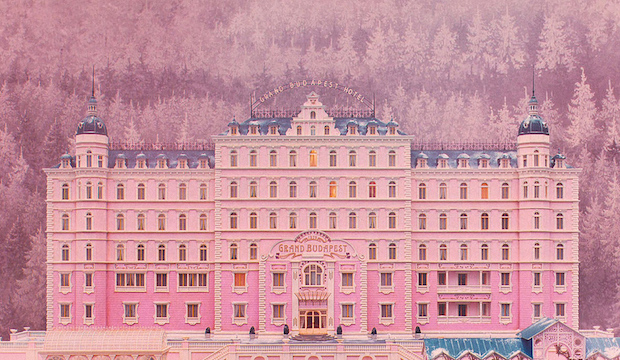 They are magical but threatened, sometimes by outside forces, sometimes by decay, time and their own unexamined authority. The characters construct the stories in which they are portrayed, and live in fear of the fragility of that imaginative deception. It is something Ralph Fiennes conveys exquisitely as M. Gustave, a nervous sensitivity, a desperate insouciance born of fear. That same fear of the fragility of his kingdom drives Max Fischer's rage and desire to continually create new and vivid landscapes.

These kingdoms are their sanctuaries. In a remarkable shot in Moonrise Kingdom , Suzy and Sam stand on a bridge as the storm begins to reach full height, and gaze through binoculars at the church they want to reach. The camera suddenly zooms out, pulling back through to the interior of the church, with the two children centrally framed by Noah's Ark in a stained glass window depicting the flood.
It’s a sign of the growing melancholy in Anderson’s latest films that in The Grand Budapest Hotel there is a strong sense the magical kingdoms cannot survive the threats posed by the real world, there is no sanctuary that is not fleeting, and stained glass and music are no protection against rifle butts. 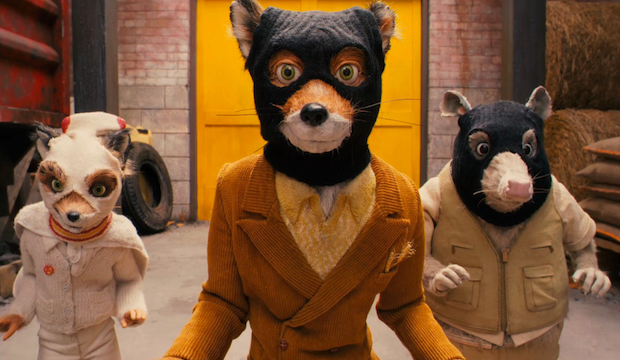 Anderson’s films are mischievous, high-spirited adventures, full of fizz and colour. But they are escapes as well as adventures. The exuberance is underlit by an outsider's fugitive sense of loss. The Grand Budapest Hotel features a comically extended prison break-out set piece, but it extends as if in a nightmare, down extended corridors, with the light of freedom always just out of reach.
The first scene in Bottle Rocket involves Luke Wilson’s escape from a voluntary institution, using knotted sheets, dropped down a classic Anderson vertical shot. It’s a scene visually replicated with a rope ladder in The Grand Budapest Hotel. Escape, and escapes, real and imagined, constantly replay in his films.

These aren’t just attempted escapes from the prisons characters find themselves in, but also escapes from their formal definition by the film. Characters turn on their heels and run into the picture, dive through trapdoors and into books, are pursued from scene to scene across intricately devised landscapes. They step across their dividing lines to find each other and suffer heartbreak and hurt as a consequence.
These are not people looking to escape to be by themselves, but to form societies and pairings that can make their own frames of reference, and organise the material world in their own way.

Anderson's films continually explore the negotiation and conflict between personal freedom and the imagination, and the constraints of social systems and reciprocal requirements of family. Despite an apparent childishness, they are subtle and kind examinations of people, places and things. 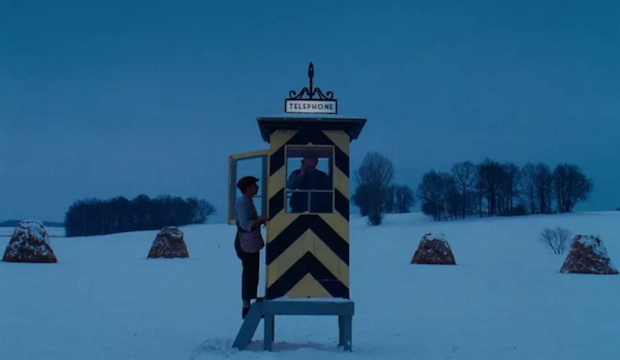 Anderson is not a parochial filmmaker. Even when the setting is American, the influences and sounds and references flood in from elsewhere, often from people themselves not to be defined by borders, like Jacques Cousteau and Stefan Zweig. His films do not stand as edifices erected to a multi-billion-dollar industry, but invite viewers from all parts of the globe into their marvellous worlds.
As Mrs Fox says of her husband: "We’re different, we all are, especially him, but there’s something kind of fantastic about that isn’t there?"