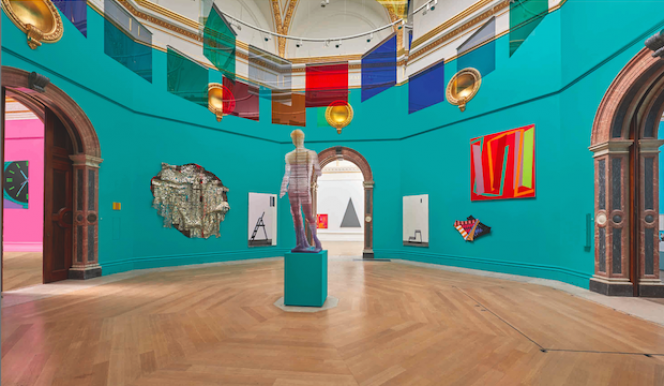 We all love the Royal Academy Summer Exhibition for its chaotic, non-hierarchical 'Salon Hang', glamorous visitors and flourishing emerging arts scene. But 2015 will be a year that goes down in history.

The oldest open art competition in the world has had a tremendous overhaul and a fresh lick of paint from the radical RA teacher, Michael Craig-Martin. There's still that heady concoction of charmingly amateur and strictly professional which makes the Royal Academy Summer show special, but there's a new vigour in the air at Burlington House.

The year of colour and light

Slimmed down and streamlined, the RA Summer Exhibition feels brilliantly light and airy this year - driven by an influx of colour to the proceedings. Craig-Martin has managed to import his favourite lurid pink, along with a fresh turquoise and sky blue to the gallery walls, while Jim Lambie makes the invisible grand staircase a stand-out feature covered with radiant lines of colour. You might be dubious about the pink scenario, but actually - it's pretty spectacular. 'I broke all the rules!', Craig-Martin laughs at the press view about the biggest show he's ever organised. 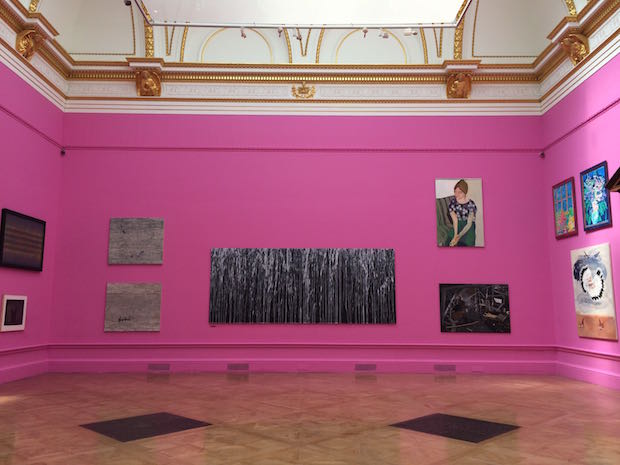 'My first thought was, I don't want to do it at all!', Craig-Martin explains. The main aim was 'not to have it collapse into a sense of confusion'. And that is the last thing you'll find at the RA. 2015 is the year of slick curating, giving works a chance to breathe while still embracing that classic higgledy-piggledy hang. It's so well polished that every viewpoint has new delights.

The flush of pink in Room III is grounded by Richard Long's Mississippi River Blues, which can be seen from a distance, but the real treasure is a brand new Jasper Johns work in Indian ink called Untitled (2015) just adjacent.

The godfather of British conceptual art, as Michael Craig-Martin is affectionally referred to, was a mentor to Damien Hirst and Sarah Lucas - so it's only right that the 2015 Summer Exhibition should embrace emerging artists both young and old.

Big hitters on the roster are old favourites like Tracey Emin, Grayson Perry, Anish Kapoor and Anselm Kiefer. Perry's monumental new tapestry Julie and Robb dominates Room I with relish, while Kapoor's sculpture in Room VI is a delicate and almost unrecognisable gem compared to his fleshy show at Lisson Gallery earlier this year. Kiefer is still riding high from the stellar Royal Academy retrospective in 2014, and returns to Burlington House with a sinister new work of a piece of clothing stained with black dirt. 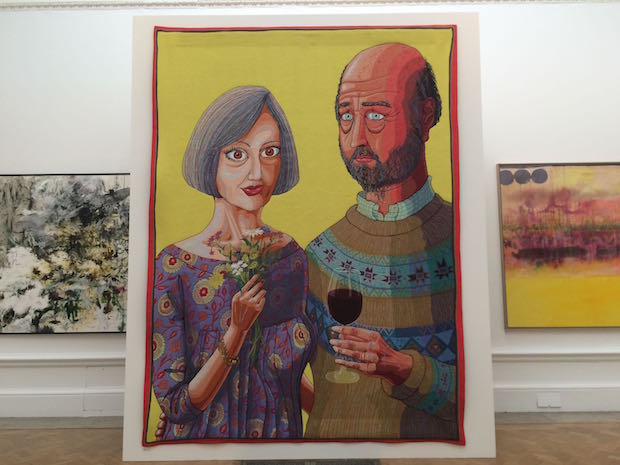 The pantheon of British art Royalty have all been enlisted: famous British landscape painter Norman Ackroyd curated the prints selection, while Tracey Emin throws her hat into the ring with a selection of small and quaint animals. Look out for established print makers Tim Head and Julian Opie doing what they do best, and Fourth Plinth artist turned printmaker Yinka Shonibare venturing into the practice for the first time. The ever engaging Cornelia Parker of exploded-shed renown makes a statement with Stolen Thunder, a picture within a picture covered in the classic RA red sold stickers.

One of the key invited young guests must be Liam Gillick who crafts a gloriously colourful ceiling installation Applied Protection Rig in the Wohl Central Hall. Another young artist making a splash this year is Matthew Darbyshire with his fantastic transparent polycarbonate and stainless steel figure Doryphoros.

But it's actually sculptor Conrad Shawcross that snags the prize for youngest showing artist. At 37, Shawcross has been given the tricky task of filling Burlington House Square with a new installation and The Dappled Light of the Sun does not disappoint. An enormous work made up of five steel clouds constructed out of thousands of connecting solids, the work bursts out of the ground like a giant mechanical spider.

Another moment of installation genius must be David Nash's tower of cork pieces in Room II where a curious array of paintings is curated by Jock McFadyen RA, including a leering portrait of Simon Cowell by Jean Samtula and a particularly smug Damien Hirst by Harry Hill. 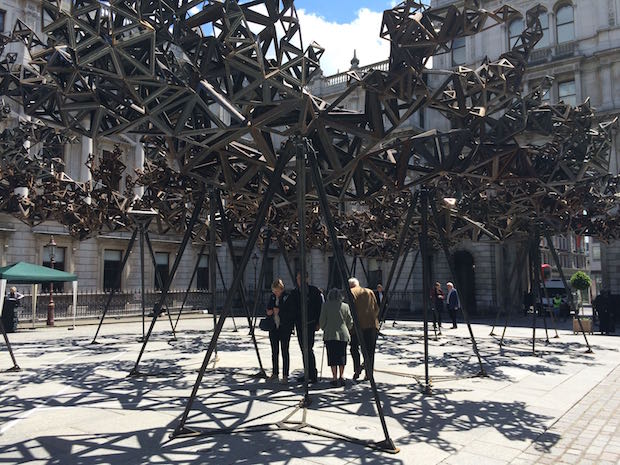 Conrad Shawcross RA installation, The Dappled Light of the Sun (2015)

Older artists on the block

But these young whippersnappers can learn a thing or two from the driving force of the show which is the over 65s. Tired of emerging artists being seen as purely young, Craig-Martin invites a number of artists who he knows personally and greatly respects to show work, putting some woefully forgotten names back into the spotlight. Notably Alan Charlton's Triangle Painting (2015) is the gravitational pull of the entire show. Craig-Martin also takes pains to spotlight the recently deceased painter and close friend William Bowery RA in Room VIII.

There are several areas of calm in the Royal Academy exhibition where you can take stock and immerse yourself in a single artist's work. One of the best is in the Small Weston Room which is dedicated to newly elected Royal Academician, South African artist William Kentridge. While everyone else seems to clamour for your attention, Kentridge provides a moment of silent meditation with a number of drawings of indigenous African trees. Over in Room X, you can discover the meticulous project by Tom Phillips RA which feels like contemporary art gone mad. The artist spent ten years changing every single page of a Victorian novel. 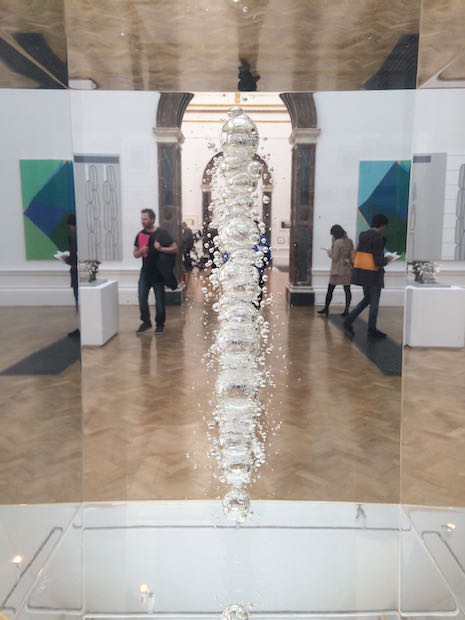 As something of a traditionalist, we don't dare cast judgement on the architecture display this year. However, design lovers will celebrate its  new prime position in the Large Weston room, breathing new life into an established section of the Summer Exhibition.

Photography lovers will want to head to Room IX where Alan Green's image of the cheeky, half-smiling boy fills the space with personality. You'll also be shocked by Michael Sandle's frightening sculpture of a monumental pilot grasping a handful of severed heads (As ye sow so shall ye reap: an allegory).

Finally, the Summer Exhibition takes us through the stellar selection of sculpture, from Anthony Gormley's block figures to Jacqueline Poncelet's stunning wallpaper Between Us and the harrowing gigantic figure by Tim Shaw made of black foam and polythene, fleeing from the towering flames.

Why is this year different?

The Summer Exhibition is always a completely different experience to any other show in London. It requires time, effort and a lack of judgement. The biggest names can fall the flattest while complete unknowns can shine brightly - that's the joy of this playful and unique show. With the rainbow of colour and the radiant light bounding through the galleries this year, Craig-Martin makes a bid for the best Summer Exhibition we've seen in years.