Riotous colours and geometric patterns kick-off spring at Tate Modern, but who is Sonia Delaunay? 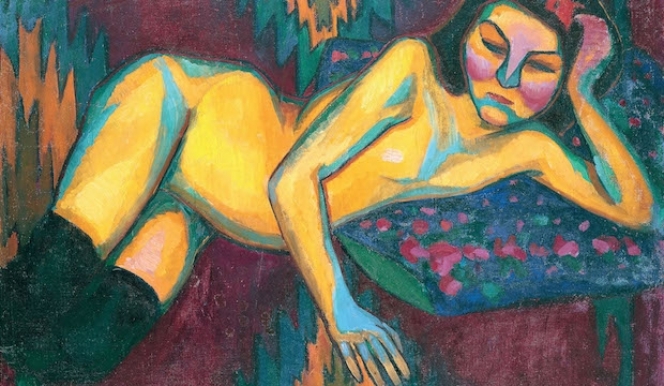 With the brooding Marlene Dumas exhibition across the hall, Tate Modern unveils the latest in a series of blockbuster shows to celebrate little known female figures in modern art who have been sadly sidelined. Next in the limelight is Sonia Delaunay, the fiercely inventive artist who crafted vibrant textiles and thrilling paintings of modern life, but is best known as the co-creator of a new form of abstraction called Simultanism with her husband Robert.

This new exhibition is a riot of colour and pattern across Sonia Delaunay's enormously varied practice, from fine art painting to furniture to fashion. There's only one explanation, unlike her highly theoretical husband, Sonia could multitask.

Who is Sonia Delaunay?

A tour de force with , Sonia Delaunay's colours and pattern pulsate with the musical rhythms of 1920s Parisian dance halls and the flickering new electric lights on the Boulevard Saint Michel. Blending art, architecture, poetry and fashion - Sonia allowed her fascination with colour and design to bleed into all aspects of her creative life. Tate Modern Curator Juliet Bingham explains she was always finding different ways to transcribe dancing, movement and rhythm'. 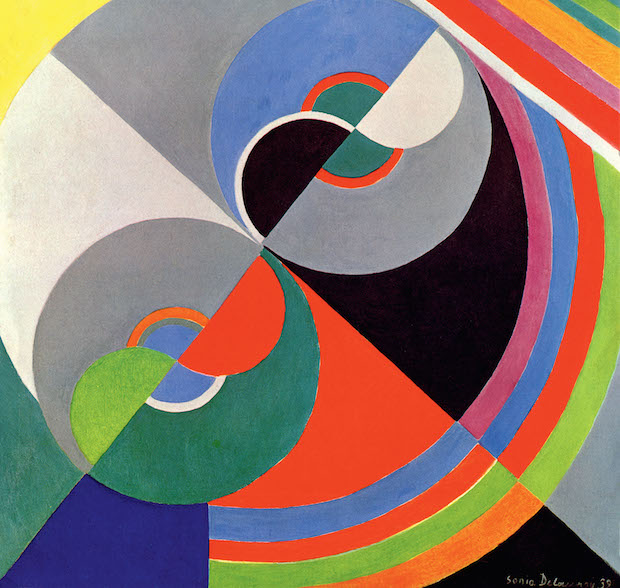 Sonia Terk, as she was known, was a highly educated young woman who grew up in the thralls of the St Petersburg bourgeoisie and went on to study at the Art Academy in Karlsruhe Germany (1904) and the Académie de la Palette in Paris (1906). It was in Paris that her star began to rise as she made the acquaintance of the influential art collector Wilhelm Uhde, known for his dealings with Pablo Picasso, Georges Braque and André Derain. In order to stay in the city, Sonia married the homosexual Wilhelm Uhde in 1908 and re-married for love in 1910 to the French artist Robert Delaunay.

At the outbreak of World War I, Robert and Sonia continued their travels through Spain and Portugal. Sonia used the time as an opportunity set up her own fashion house, Casa Sonia, first in Madrid and then Bilbao, San Sebastian and Barcelona. The pair returned to Paris in the 1920s and flourished as influential members of the avant-garde set before Robert's death in 1941. In contrast, Sonia's career went through a number of different periods, and she lived to the ripe old age of 94.

You can't help but fall in love with Sonia Delaunay's rigorous colours and dancing shapes at this Tate exhibition, where florals meet zigzags and elaborate art deco forms. Positioning the vibrant artist alongside other 20th century movements, we can think of Sonia Delaunay as closely related to the wild beasts of Fauvism and the fierce German expressionists.

The endless variety in this Tate Modern show is an indication of Sonia's pioneering methods which range from a colourful hand-woven carpet entitled Discs (1968) to Mosaic (1955). She also illustrated a number of publications which united colour, text and form, spotlighted at Tate by the riotous colour and invention.

Look out for Yellow Nude (1908): a provocative image of an angular reclining female reclining with sharp shades of blue defining her body, a clear nod to Paul Gauguin's exotic Tahitian women and Henri Matisse's Blue Nude (1902). There's also the dynamic hunched shoulders and jarring turquoise tones of Young Finnish Girl (1907) and images of her dressmaker Philomène to see.

Dancing primary colours give way to heavy expressive black and a darker palette, but Sonia Delaunay's figurative style appeared well into the Second World War when she was inspired by the sun-drenched markets of Portugal and Spain. In The Orange Seller (1915) you can just make out the hats of market traders and twists of orange peel. 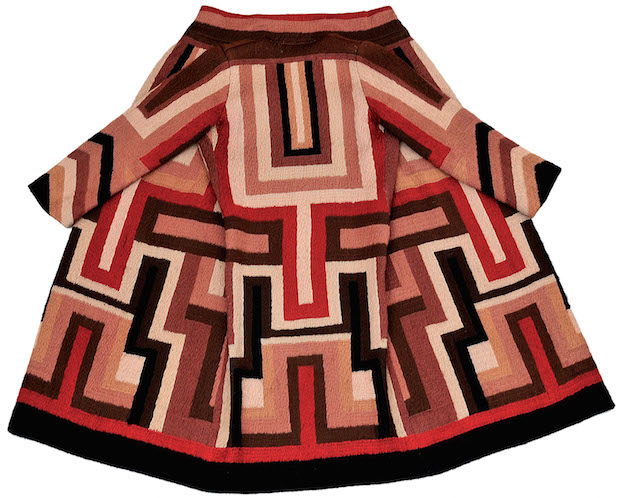 The crowning glories at the Tate Modern Sonia Delaunay exhibition are the textiles. Far from simply decorative fashion, Sonia Delaunay made 'living art' where clothing collided with poetry and fine art as Dada Dress-Poems (1922) and vibrant costumes - a liberation from the frills and flowers of 1920s fashion.

Photographs on display also reveal Sonia at her most powerful, amongst the embroidered cushions, embellished poetry on wall hangings and refracted light of her Parisian atelier. Twirling in her zigzag designs, these images picture American actress Gloria Swanson who had a coat crafted by Delaunay's team of Russian embroiderers from ten different shades of wool.

During the interwar years, Sonia also collaborated with the radicals of the nihilistic Dada movement, who were making waves in Europe with their anti-war performances, with costumes for Le P'tit Parigot (1926), an embroidered canvas with Dada curtain poet Philippe Soupault and interior design for the Dadaist bookshop Au Sans Pareil in Neuilly. 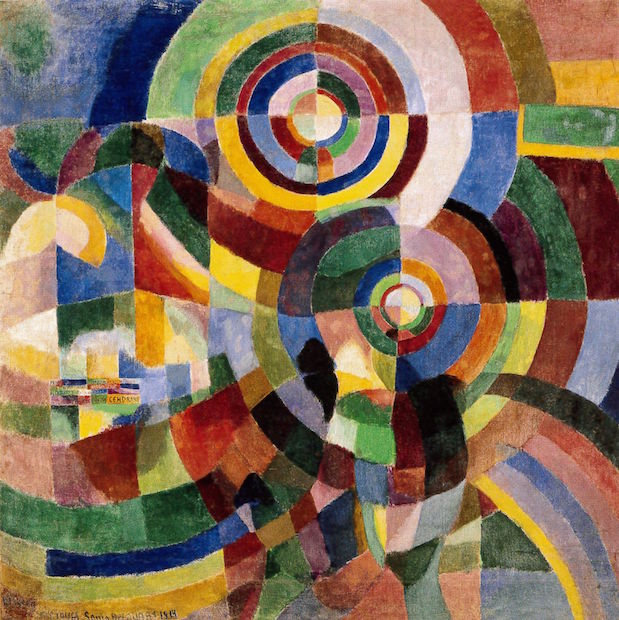 The blockbuster show has just come over from Paris where it caused a stir at the Musée d'art Moderne. Of course Paris was the epicentre of the Delaunays' power and symbols of modernity like the Eiffel Tower are present in both Sonia and Robert's work. Their home at 19 Boulevard Malesherbes was decorated by Sonia and formed the headquarters of a lively group of artists and writers.

With 400 new additions in London, the exhibition has a new spring in its step - but is more always better? 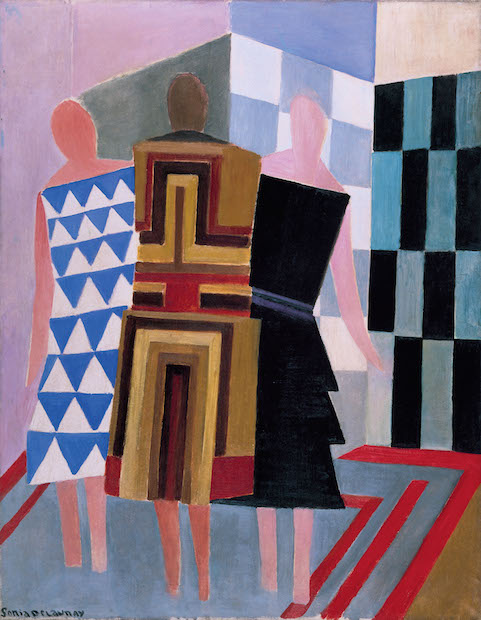 We have to wonder what the Tate want us to believe. It's clear that Sonia Delaunay was a revolutionary and an endlessly prolific modernist, but her highly personal experiments with abstraction in fashion, art and textiles seem at odds with the whitewashed walls of this contemporary art museum. The curators have been particularly eager to highlight the stunning patchwork cradle cover, which Delaunay made for her new-born son in 1911, as her first steps into abstraction. But displayed in the vacuous and impersonal halls of the Tate, the jovial ingenuity of Sonia Delaunay seems confused.

And then there's the question whether Sonia Delaunay was forced into textiles while her husband Robert stayed with the more manly material of painting? Curator Juliet Bingham insists Sonia was never constrained by her gender, something demonstrated in her move between painting and textiles throughout her career, but did Sonia stifle her own bright star to protect the career of her collaborator husband? Certainly a more profitable business, there's also the question whether Sonia abandoned fine art for the commercial certainty of textiles and fashion.

There's something more behind the eyes of Sonia Delaunay and her fantastically varied practice, but as the sun comes out over London, visitors will love the dynamic colours and geometric patterns of this spring Tate Modern exhibition.