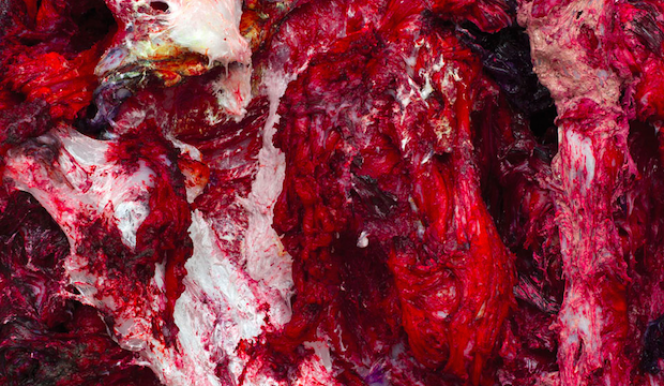 “I’m not really interested in expression” Anish Kapoor muses at the opening of his latest Lisson Gallery show. “I have nothing to say as an artist”.

Good thing, then, that his latest works speak for themselves. Nothing can prepare you for the feeling of standing in front of one. Tides of flesh in resin and silicone loom ten feet high. Crimson ribbons twist into folds and flaps; behind these, dark recesses. Touches of blue deepen the palette, while shocks of white suggest bone and cartilage. Horribly, a yellow glaze in places becomes something septic. These pieces are awful and mesmerizing.

Kapoor is known mainly as a sculptor. High profile commissions such as his London 2012 Olympic Orbit tower have made him a household name. His 2009 Royal Academy show was one of the most talked-about exhibitions in recent years; a wax boulder coursed through the RA rooms, while a cannon fired molten wax at the white walls. He is no stranger to red splodges.

But, before all the hubbub, Kapoor was a painter first and foremost – he has had a “long engagement” with the medium. This Lisson show, the artist says, marks a return to these painterly roots. (Though, we must say, these works jut and bulk more than any paintings we’ve ever seen).

Yes, they are hideous. But, eventually, they start to look quite beautiful, too. After the initial confrontation, you start to see, not gore, but life. Kapoor has long been fascinated with red, not just as the colour of blood, but as a colour of power and love and birth. If nothing else, these paintings are huge, sculptural symphonies in red.

Elsewhere, vast hunks of pink onyx sit on the gallery floor. These smooth and rounded marble creations each have a groove, or opening. You start to think of ears, or noses, or navels, or orifices. These sculptures are just as bodily as the fleshy resin, but more discreet.

The works, Kapoor said, are not necessarily a response to the contemporary media landscape; to war or violence. “I haven’t tried to make some grand opera and tackle all the world’s problems. One kids oneself when one does that”. Instead, Kapoor tries to leave his work open. “To allow space for joy, or beauty, or death, if people want to see it there. We live in terrible times and the viewer brings that into the gallery.” In other words: beats me! I just made it because I couldn’t not. You decide what it’s about.