He layers his paint thickly, his trademark technique, ‘impasto’, and here the fatness of the paint and the curdled palette give the idea of dirt and exhaust fumes under an overcast sky. A yellow car zooms past, a red double-decker bus charges towards us, a dog sniffs at something on the pavement. Vertical and horizontal lines suggest the cranes, buildings and lamp-posts of the cityscape. Everything is moving, everything is chaotic: the painting is alive. 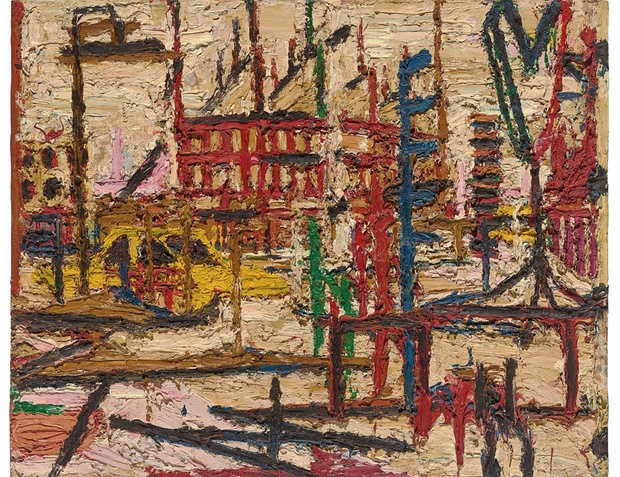 Frank Auerbach is an artist’s artist. His practice is deadly serious and he is deeply in love with his work. At the age of 84, he still paints everyday. “It seems to me madness to wake up in the morning and do something other than paint”.

All of his tactile paintings are the work of an intensive process; working for months, sometimes years, on a subject. Auerbach layers his paint on thickly, and then scrapes it back to the canvas, only to paint all over again. He never knows when the painting will be finished, describing it as ‘a surprise’.

The exhibition is laid out chronologically, and it is Auerbach’s earliest work where his impasto is thickest. You want to dive in to Building Site, Earl’s Court Road, Winter : the blacks, browns, reds and greens are deliciously thick. A broad slick of brown and gold suggests the light pollution. The texture twitches and shimmers, with thousands of half-seen shapes and movemnnts that make up a nocturnal urban scene. 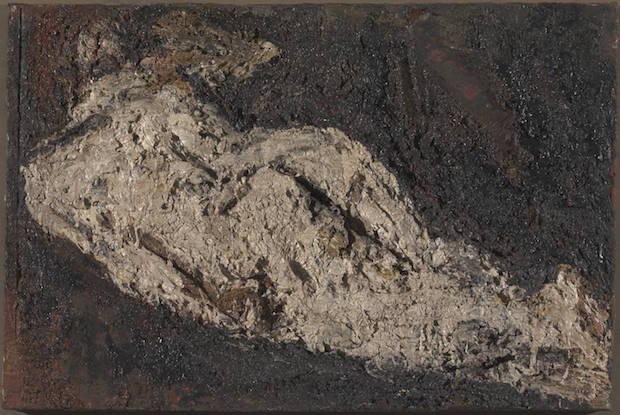 Auerbach is a creature of habit, and he likes to paint the same scenes, the same faces over and over again to ‘see them anew’. It isn’t that he thinks Camden town is the best place to paint in London, it’s that it’s his home. It isn’t that his five sitters are the most striking people in the world, it’s that they’re his friends, lovers, children. Auerbach can look at one of his most abstract pieces and identify from the bustle of forms a plate, a print, a dictionary: his works are particular and deeply personal.

The exhibition looks at his five sitters, as well as Camden town, where his studio has been for the last fifty years. Auerbach is acutely aware of time passing, and we see the effect of time upon the faces and places he loves. His work is an attempt to ‘pin down an experience before it disappears’.

The problem with this exhibition, though, is the layout. There’s an ever-so-slight whiff of navel-gazing; Auerbach was allowed to curate the exhibition himself, with the exception of the meandering, random final room, which was curated by one of his models and acolytes, Catherine Lampert. It is always a risk to involve an artist in their own retrospective. Often, they shun their early work and, here, we are not given nearly enough juvenilia to explore. The decision to order the works chronologically poor. Auerbach is a tough artist, and his works would have been much more accessible had they been grouped thematically.

Nevertheless, there is plenty here to stun. Auerbach is the rarest of things: a man so consumed by his artistry that if her were prevented from working, you feel he’d simply cease to exist. Glorious.