Dynamic indigenous Australian culture comes to life at the British Museum, but is it anything we haven't seen before? 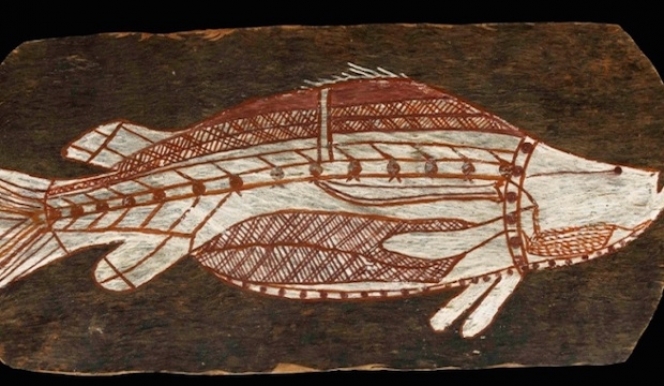 Bark painting of a Barramundi, Western Arnherm Land, about 1961.
In 1964, 17 year-old Yuwali (Janice Nixon) came face to face with the first white person she had ever seen when she was forced to abandon her Aboriginal home in the arid centre of Australia. As the truck sped towards her down the dusty road, she was convinced it was a white devil.

There is a great deal of controversy swirling through the halls of the British Museum at the moment. Aside from the sad departure of Director Neil MacGregor, the new exhibition Indigenous Australia: Enduring Civilisation reopens the fierce debate on acquisition. '

"Yes, there are of course many opinions about where these objects should be', curator Gaye Sculthorpe joked at the blockbuster's press view. There are some 6,000 indigenous items in the British Museum collection, a hefty proportion of which are being disputed as plundered booty that needs to return home. As the British Museum puts its fingers in its ears about the Elgin Marbles fiasco, does this new exhibition employ the same denial tactics?

Indigenous Australia is definitely groundbreaking in its scope - from 1800 to contemporary Aboriginal artists still influenced by their ancestral practices. And, far from simply pitying the despicable treatment of indigenous societies, this British Museum show does celebrate how Aboriginal culture has endured (hence the carefully worded title).

But does it ring true? Through the storm cloud of debate, the British Museum manages to give a balanced view, but there's nothing particularly groundbreaking about this well-trodden western understanding of indigenous cultures. 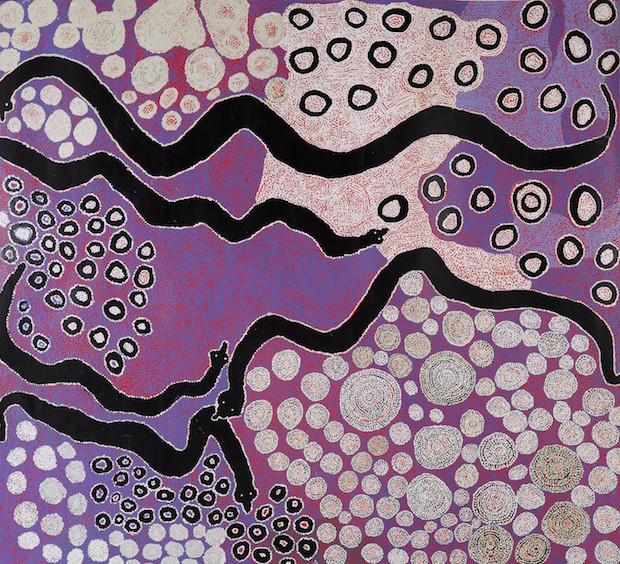 It's shocking to think that while the Civil Rights Movement was in full swing during the sixties in the USA, Aboriginal societies were still being evicted from their homes. To break it down - Australia became a nation in 1901 when the disparate British settlements joined forces, but it was only in 1967 that Aboriginal people were counted in the national censes.

With this violent history in mind, the British Museum traces the tangled story of indigenous culture, and the invasion of Captain James Cook and the British colonisers in 1770. The explorer is memorialised in the show by a portrait from contemporary artist Michael Cook as well as a sombre shield from a man trampled by Cook's troops in Botany Bay. But we know this beast so well, the ferocity of the British settlers is nothing new.

Then there's the actions of the Australian government, which has evicted Aboriginal groups and even taken indigenous children away from their families to be assimilated into white communities. One curious story that will stop you in your tracks is indigenous artist Albert Namatjira who was phenomenally famous in the 1950s for his landscape art, so much so that he was made a full citizen of Australia. But Namatjira met a cruel end, dying in prison after supplying alcohol to an Aboriginal, which was strictly prohibited. 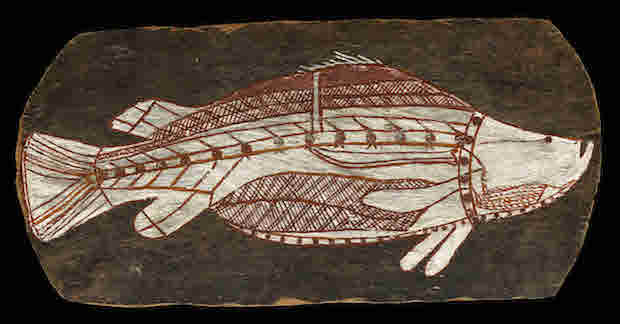 Bark painting of a barramundi. Western Arnhem Land, about 1961, copyright The Trustees of the British Museum

What's fascinating is the British Museum's explanation of indigenous culture, and their close connection to the land and sea. As Mick Dodson of the Yawuru people explains, 'we have grown the land up. We are dancing, singing and painting for the land...Removed from the land, we are literally removed from ourselves' (1997). Each of the countless indigenous cultures has a different relationship to the world around them; for the Torres Strait Islanders, water and the stories of sea animals are particularly important.

Indigenous art has a rich cultural history dating back 40,000 years, which is crucially entwined with ceremony and ancestral identity. For example, a decorated shield is not just for defence, but a symbol of identity with each line, colour and carving telling a story about the owner and their life. From bark baskets and digging sticks, to biting bags and memorial poles, you'll be delighted by these objects which are culturally resonate as well as visually arresting. 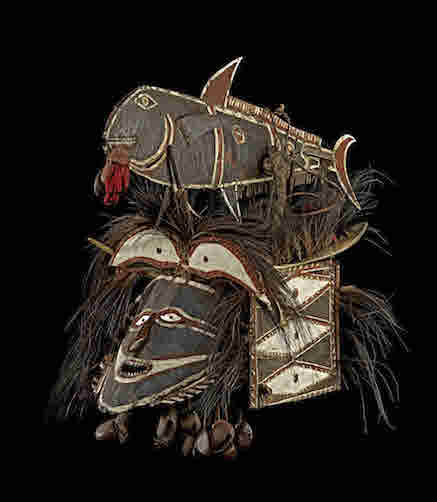 Mask in the form of a human face and a bonito fish, attributed to Kuduma, Murala, Nagir, Torres Strait, Queensland, Australia before 1888 copyright The Trustees of the British Museum

What's curious is that many of the 'Dreamings' paintings (explanations of the complex religious philosophy that governs Aboriginal life) could be abstract paintings, pinned up on Jackson Pollock or Gillian Ayres' walls. The show is strongest when it embraces this connection to contemporary art and the modern thrills of Aboriginal life, epitomised by the Aboriginal man Farron Gorey snapping his selfie in 2013 at the Mbantua Festival in Alice Springs.

A particularly spectacular Dreaming to make a bee-line for is Yumari (1981) by Uta Uta Tjangala, a heady painting which tells the story of the old man Yina and his illicit relationship with his mother-in-law, and a thrilling autobiography of Tjangala's desire for the Pintupi people to return to their homelands. This colourful image is now on every Australian passport. You'll also want to see Bakulangay Marawili's Dreaming of his home at Blue Mud Bay (2002), ancestral fires and crocodiles, and the transformation of fresh water into salt water as the change from body to spirit. 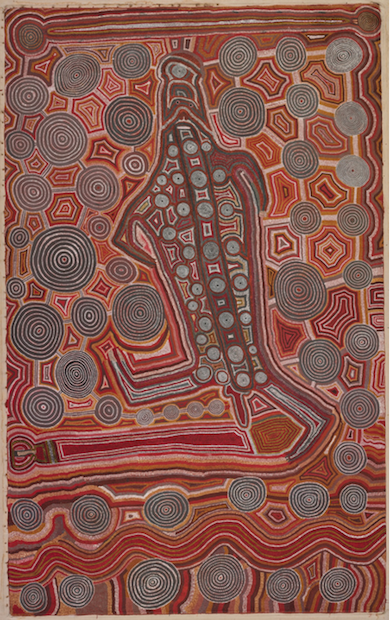 Other stories that stray from the classic story of inequality in Australia include the fascinating Aboriginal cricket team that toured the UK in 1868, thrilling crowds in between games with their spear throwing skills. You'll also love the curious array of traditional boomerangs and the didgeridoo from the Arnhem land on display, which are far more than just tourist tat. A particular favourite is the grass skirt sent as a gift to the Princess of Wales to celebrate her marriage in 1863, a desperate attempt to appeal to the Royal Family in the climate of enforced government reserves for Aboriginals.

The Indigenous Australia exhibition is far from reductive, and does celebrates the complex histories of a hundred different cultures across the continent with aplomb, but there's still a bitter taste in the mouth. The British Museum has been careful to ask Aboriginal people questions, buy new work and commission contemporary pieces. But there's nothing surprising here - while hugely varied, the common language of curious Aboriginal artefacts locked behind glass boxes still clings on.