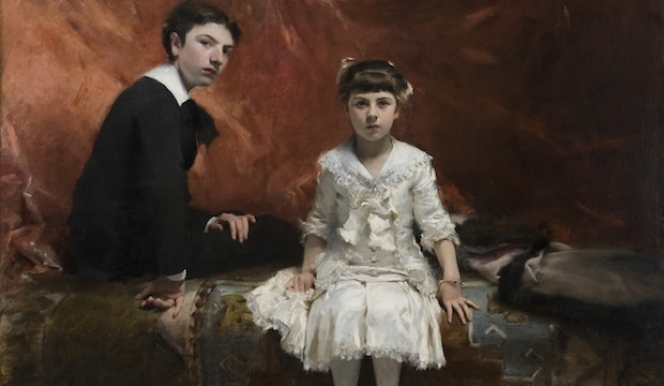 Copyright: Des Moines Art Center, Des Moines, Iowa Édouard and Marie-Louise Pailleron by John Singer Sargent, 1881
John Singer Sargent has long been regarded one of the greatest portrait painters of the twentieth century. The ravishing brushstrokes of his painterly and evocative images make it clear why. To stroll amongst the famous writers, artists and actors in this exhibition is like entering a private party in Sargent’s boudoir, where velvet and sumptuous tapestries surround a rich who’s who of contemporary society.

As National Portrait Gallery curator Richard Ormond explains, the inspiration for this exhibition began with Sargent's intimate portrait of his friend, the writer Robert Louis Stevenson. In it, Stevenson can be seen nervously patrolling his drawing room, twiddling his moustache, while his wife sits slumped in the corner – one of two Sargent portraits of the writer on display. 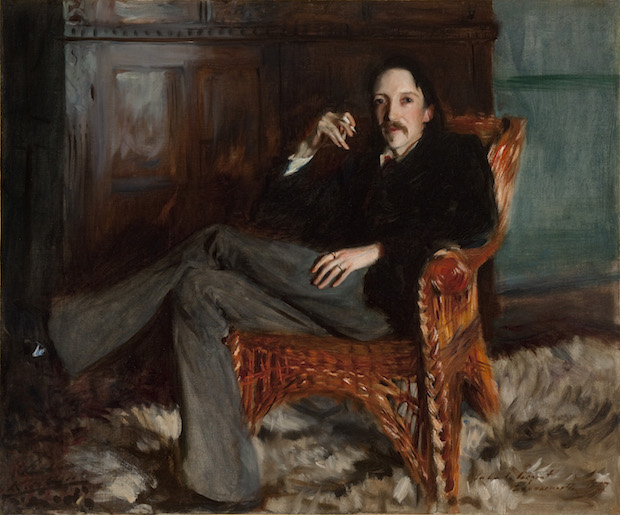 Other recognisable figures appearing in John Singer Sargent artwork include his fantastic portrait of Turn of the Screw writer, Henry James, who once described a young Sargent as a man 'on the threshold of his career, who has nothing more to learn’.

Possessing all the tools of a genius portrait painter, Sargent was able to reach the heart of a sitter’s personality with astounding economy of paint and a vigorous brushstroke. These paintings and sketches at the National Portrait Gallery London are intimate and offbeat, radiating a certain wit and awareness that only Sargent was capable of. With a marked gleam in their eyes, it's as if all Sargent’s sitters have been admitted to a secret society that spans the boulevards of Paris and the smoky streets of Victorian London.

‘I’ve always felt that Sargent as a cultured man has been underplayed’, says Richard Ormond. This John Singer Sargent exhibition 2015 places the painter at the heart of a glittering circle of writers, actors and artisans, including English actresses Mrs Patrick Campbell and Ellen Terry in all her glory as Lady Macbeth for Henry Irving’s 1888 production at the London Lyceum. Also among them is wild Spanish dancer La Carmencita (1868-1910) whom Sargent first saw at the 1889 Exposition Universelle in Paris before she came to be New York's Golden Girl.

For those unfamiliar with the painter, Sargent's life was a rich and varied one. An immensely cosmopolitan expatriate, he was born in Florence and went on to study art in Paris – as Ormond says, ‘The Sargents came to Europe and forgot to go home.’ On arrival in Paris in 1874, Sargent found the city ‘humming with all sorts of -isms’ as critics attempted to get to grips with the radicalism of the new Impressionist exhibition. Under the wing of influential Parisian art teacher Carolus-Duran (don’t miss the weighty Sargent Carolus-Duran portrait in the second room) the young painter learnt that ‘each stroke of the brush should describe a tone or a half tone’ – denoting the subtlety that is evident in all his extant work. 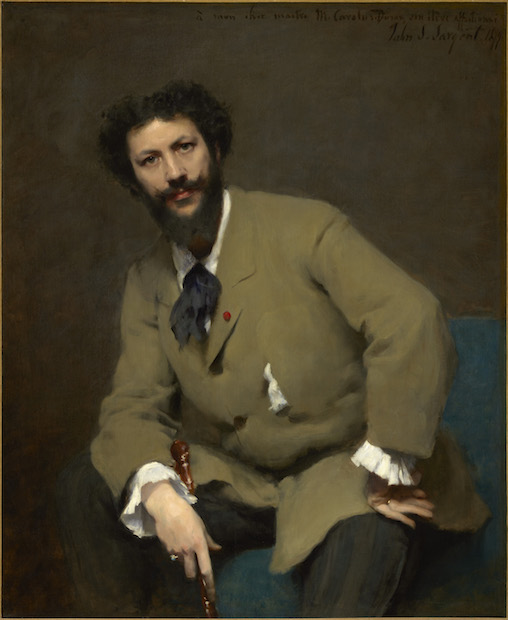 As Sargent moved back to his American homeland in 1887, unable to resist a hefty commission from banker Henry Marquand, the NPG exhibition turns to the bright lights of the New World. Showered with work, Sargent was welcomed to America like a returning hero, and this room is accordingly dominated by the powerful figures of American society, including the likes of Shakespearean actor Edwin Booth. It was during this time that Sargent was awarded the Boston Public Library commission – often considered John Singer Sargent’s most famous work: ‘for [Sargent], public art was the highest form of art’, Ormond explains. This period marks the high point of Sargent portrait painting, and it’s evident why: scintillating Sargent had become the man of the moment, and everyone wanted to be painted by the illustrious artist.

Having conquered portrait painting – and in the wake of that scandal with Madame X (1883-4) when a bared shoulder led to uproar in Paris, the exhibition's final room turns to the fantastic landscapes of Sargent’s late career. Pressured by the need to go 'one step better' with each notable sitter he painted, now Sargent 'wanted to paint landscapes where he could be his own man’. Influenced greatly by his friend Claude Monet’s work in Giverny, the John Singer Sargent technique faced up to the challenge of plein-air painting with astounding results. You’ll be whisked away by the romantic, whimsical compositions of Southern Europe and meadows of Italy, particularly engaging in Group with Parasols (1904-5). 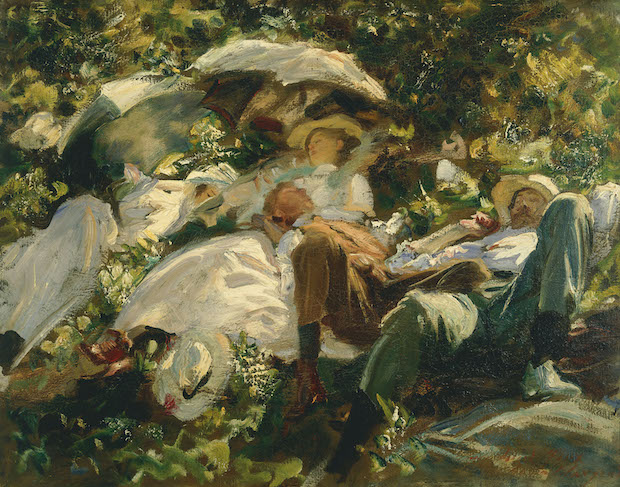 Key works that visitors to the gallery shouldn’t miss are the radiantly depicted Tate Carnation, Lily, Lily, Rose (1885-6) – a jumbo plein-air sketch with a powerful punch of Pre-Raphaelite sensation, yielding the wistful narrative of two girls lighting paper lanterns at dusk in a rose-planted garden.

Also to look out for are the striking Portraits de M.E.P et de Mlle L.P (1881) featuring a feisty young girl in a satin dress complete with haughty glare and silver bangle and a boy in a crisp, white collar. In later years 'Mademoiselle L.P.' recalled the laborious eighty-three sittings she endured in the company of the young artist, and his frustration with her bad behaviour. He was, apparently, so relieved to finish the painting that he hurled a piece of furniture out of the window on its completion.

Famous Sargent works that are sadly missed are the Lady Agnew of Lochnaw (1892), now in Scotland, and Madame Virginie Amélie Avegno Gautreau’s infamous bare shoulder, but there are also many delightful moments, such as in the John Singer Sargent sketches – a refreshing contrast to the surrounding oils.

The glitterati characters in the John Singer Sargent National Portrait Gallery exhibition give any West End opening night a run for its money, and Sargent will dazzle visitors to the gallery with his painterly technique, richness of oils and evocative personality.