Writhing flesh, divine retribution and world class portraiture: Royal Academy Rubens show is one of the best exhibitions in London. 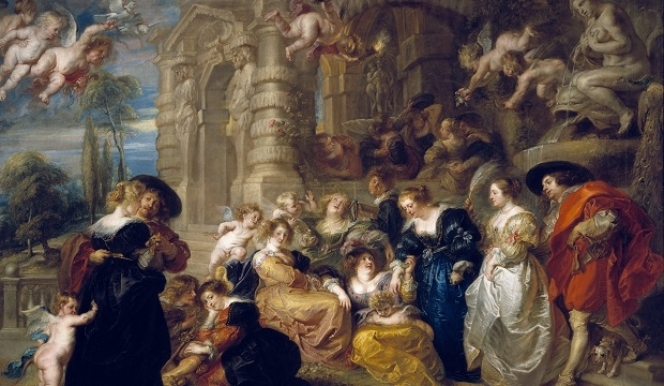 Peter Paul Rubens The Garden of Love, c. 1633 Oil on canvas, 199 x 286 cm Museo Nacional del Prado. Madrid Photo c. Madrid, Museo Nacional del Prado
At last it’s here. The Royal Academy Rubens exhibition has been the most talked about show of 2015 and even with all the hype, it won’t disappoint. The warm colour palette, expressive brushwork and subtle tones of artist Rubens’s accomplished painting take centre stage. Even the architecture of the exhibition is inventive, taking the audience through dark tunnels and behind corners to reveal treasures of Rubens’s sensual women, austere portraits and pious religious scenes.

The only downfall of this meticulously curated show is the fact that Peter Paul Rubens painted such enormous things: so enormous and valuable that the Royal Academy, London clearly couldn’t bring them all to Burlington House. In the place of oil masterpieces are nuanced sketches like Rubens’s Seventeen studies of dancing peasants for A Flemish Kermis (1630-36) and the preparations for The Garden of Love (1610). These drawings see bulbous cherubs and amorous couples gallivant across the page under the watchful eye of the goddess Juno.

As an esteemed allegorical painter, Curator Nico Van Hout, Royal Museum of Fine Arts Antwerp, says Rubens was ‘the greatest propaganda painter that ever lived’. But without the enormous soap opera series depicting the life of the Queen of France, Marie Médici (1621), designed for the Palais du Luxembourg and now in the Louvre, or James I’s Banqueting House ceiling in Whitehall Palace, it seems hard to justify Rubens’s genius. 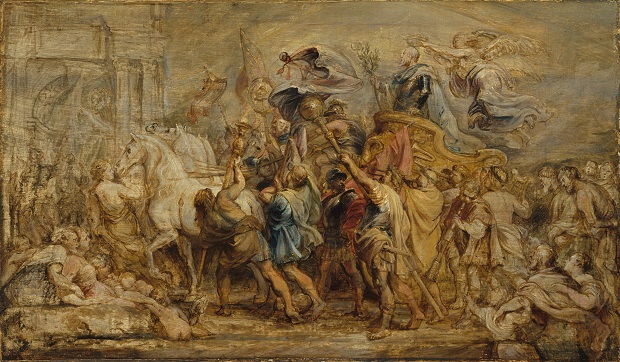 While Rubens is the star, there are countless supporting actors in the exhibition that demonstrate the influence of the Flemish painter. From masters like Van Dyck and Joshua Reynolds, modern artists Cézanne and Renoir to the contemporary world of Sarah Lucas and Jenny Saville, Rubens emerges as a force to be reckoned with. Vincent Van Gogh’s brother Theo wrote about his enthusiasm for Rubens’s phenomenal draughtsmanship’ and even Austrian symbolist painter, Gustav Klimt, imitated Rubens’s St Cecilia (1620) oil sketch for Antwerp’s Jesuit Church. This Royal Academy exhibition is like a never-ending wave of artists that were influenced by Rubens in some way or another.

For example, did you know that Rubens influenced British landscape painters like Gainsborough, Constable and Turner with the rolling hills of his country estate, Het Steen in Flanders? Alongside the idyllic meadows and orchards of Rubens’s influential The Carters (c.1629) it’s a curious pleasure to see the full-scale sketch of Constable’s The Hay Wain (1821). 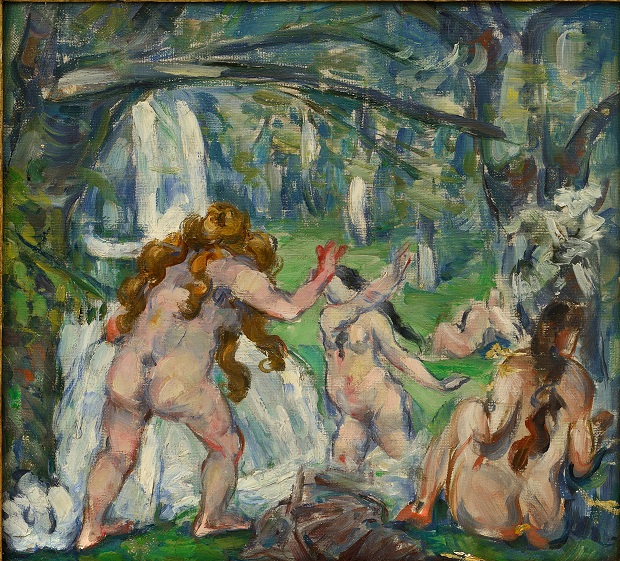 Rubens also demonstrates his grip on portraiture, with the revolutionary informality of poses and the simplicity of costumes which made his high society sitters suddenly more approachable. Van Dyke’s austere A Genoese Noblewoman and Her Son (c.1626), which glowers down at the viewer alongside portraits by Sir Thomas Lawrence and the first Royal Academy President, Sir Joshua Reynolds, emphasises the influence of Rubens in the use of architecture from the nearby Marchesa Maria Grimaldi and her Dwarf (1607).

Rubens even had a hand in the ‘shepherdess’ look which became popular at Versailles in the work of Charles Le Brun, court painter to Louis XIV, and Marie Antoinette, as she pranced around her Palace dressed as a simple peasant.

Rubens’s other talent lay in powerful religious painting, represented at the Royal Academy of Arts by the lamentation scene, Christ on the Straw (1617-18). In this startling series of three panels, Christ is lowered down from the cross, the dried blood of his nose still glistening. As the focal point of the room, Rubens is surrounded by disciples like Delacroix, Rembrandt and even an 18th century Chinese bowl which mimic these emotive scenes of the Passion. 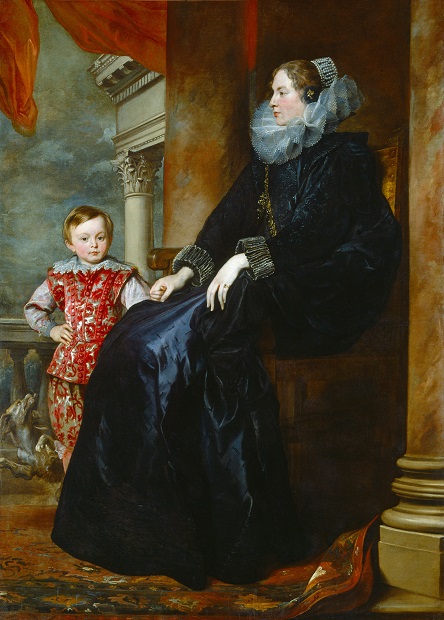 But what Rubens does best are the writhing bodies and human anguish of divine retribution. Look out for copy cats like The Raft of Medusa by Théodore Géricault where a shipwrecked crew of a French Navy frigate turned to brutality and cannibalism. Also worth seeing is Charles le Brun’s The Fall of the Rebel Angels (1685), a stunning painting of damned souls plunging down into the abyss that was so shocking for the Royal court that it was rejected. Michelangelo’s influence is clear in these scenes of contorted horror and plump gluttons. Sumptuous flesh and Bacchanalian debauchery return again and again in Rubens’s work as female bodies riddled with corpulent cellulite. ‘You feel the blood streaming under the epidermis’ says Van Hout.

However, the jewel in the crown are the snarling animals and damsels in distress of Rubens’s Tiger, Lion and Leopard Hunt (1616), which Royal Academy Curator Arturo Galansino calls ‘the most impressive highlight of the exhibition’. 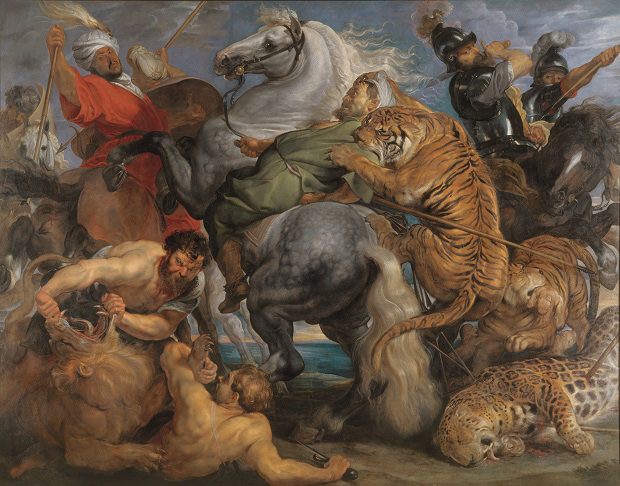 While you are perusing the delights of Rubens, don’t miss Royal Academician Jenny Saville’s curated response to the exhibition by 20th century and contemporary artists. In a new work made for the show, Saville, who we know best as a figurative painter of buxom flesh, interprets the story of Philomena. The dark myth of a woman kidnaped by her brother before being raped and having her tongue cut out examines Rubens’s fascination with abduction. Look also for the extraordinary paintings by Abstract Expressionist painter De Kooning (who agreed that ‘flesh was the reason oil paint was invented’), Picasso and American artist Cy Twombly. Even Andy Warhol’s Jackie Kennedy prints, which feel Rubensian in their obsession with sex and death, and Britain’s representative at the Venice Biennale 2015, Sarah Lucas, whose fried eggs and kebab are regularly replaced, get a look in.

This exhibition is really as sumptuous as we’ve been promised. While lacking in some of the key reasons why we love Rubens, this is by far one of the top shows to see in London now.