REVIEW: British Museum, 'Defining Beauty': this extraordinary collection of Greek Sculpture proves that the best things in life get better with age. 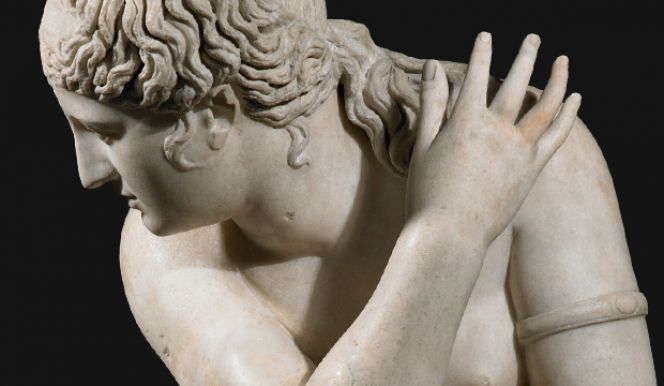 Marble statue of a naked Aphrodite crouching at her bath, also known as Lely’s Venus. Roman copy of a Greek original, 2nd century AD. Royal Collection Trust/Her Majesty Queen Elizabeth II 2015.
When famous painters and sculptors explain how they were “classically trained”, they are often referring to the years spent drawing from life and examining in detail, sculptures of the human body.

This British Museum spring exhibition takes a look at the origins of this training, and the Ancient Greek sculptors and craftsmen that made the pursuit of mimetic beauty their arduous mission

The decision to showcase the magnificent British Museum Ancient Greece collection together with never-before-seen loaned works is a unique insight into the history of Western art. Over 150 objects including white marble statues, terracotta and bronze works, celebrate the statement by ancient philosopher Pythagoras that “Man is the measure of all things”.

The first major achievement of Defining Beauty is its illumination of artistic commission and production in the classical period. Firstly, we learn that the idea of Greek and, later, Roman sculpture shunning colour as remaining the ‘pure’ texture and tone of its medium is largely false. Colouring by painting was commonplace; look out for the striking bust of a female which retains smears of paint layered on its surface.

Early on in the show, it becomes clear that classical artists’ ‘ideals of beauty’ did not simply equate to the reproduction ideals of physical attractiveness. Rather, the ability of artists to replicate with exact verisimilitude the intricacies of human anatomy became an increasingly prized skill.

Situated somewhere between these two opposing artistic aims are unique examples of Greek and Roman citizens’ own appropriations of these ideals of beauty. In one example, the patron has requested that the sculptor depict her as possessing a classically ideal Grecian body, but her head above bears the lavish grandeur of a contemporary fashionable hair style.

One surprising revelation is the imaginative richness and bawdy energy with permeates much of the Greek artists’ creations: we must remember their legacy as far more than cold or clinical attempts to replicate the human body in stone.

A central room of the show abounds with figures of satyrs and maenads, the mythical male and female retinue of Dionysus, whose bodies combined human and animal form and who were said to roam the lands fuelled by wine and lust.

In one particularly eccentric example, the heads of a satyr and a maenad form opposing handles to a ceramic drinking vessel. Also present are Amazons, and – with refreshingly understated coverage – the enigmatic figure of the Sphinx.

A fascinating tangential story within the exhibition links the Eastern conquests of Alexander the Great (3rd century B.C.) with the spread of Classical aesthetics into indigenous art production.

The show’s ‘Gandara Buddha’ (1st-2nd AD) was produced in what is modern-day Pakistan and Afghanistan, and represents one of the first times the spiritual notion of Buddha was embodied with a physical presence. The soft layers of diaphanous drapery across its body seem at odds with its subject matter: Buddha has become, we learn, ‘conspicuously Greek’.


Defining Beauty goes on to reveal the legacy of classical notions of beauty on later artistic developments. The Italian Renaissance heralded a revived interest in Classical art, but with it a desire to properly distinguish between original Greek sculptures and their Roman copies (which, in many cases, were the only surviving versions.) The most controversial example of the lengths to which some connoisseurs went to seek out the originals came later, when Lord Elgin travelled to Greece in the early 1800s and returned with original figure statues from the Parthenon now known as the ‘Elgin marbles’. 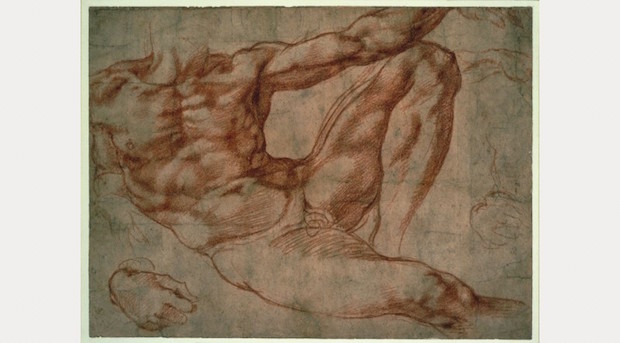 The exhibition closes with an intricate Michelangelo sketch, ‘Study for a reclining male nude, Adam’ (1511), intended for the vault of the Sistine Chapel. A curatorial masterstroke places this next to the sculpture which inspired the artist: the ‘Belvedere Torso’ leant by the Vatican museum. This Roman copy of a Greek original of a seated hero, perhaps the Greek hero Herakles, was regarded by Michelangelo as the finest fragment of classical sculpture that could be seen when he was alive.

The exhibition doesn’t spell out the significance of this pairing, and it doesn’t need to: we have just seen an elegantly minimal encapsulation of the influence of classical art on the Italian Renaissance and, inevitably, its reverberations throughout the history of the Western artistic canon.