Shocking, scandalous and deeply deeply real: Divorce on Sky Atlantic is the autumn TV show we've all been waiting for 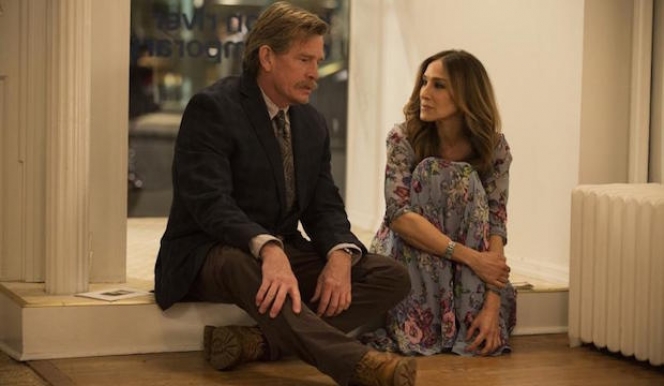 "He doesn't just make me come. He makes me come a lot". Sarah Jessica Parker as Carrie Bradshaw was pretty brash, but she would never be caught dead saying those words. Her dirtier, more selfish, cheating older alter ego in a brand new show on Sky Atlantic, however? Carrie Bradshaw 2.0 is much more fun, and starring in a deliciously horrid new show written by the mastermind behind Catastrophe, Sharon Horgan.

This is the fictional story of the magnificently selfish Frances (Parker), who finds herself is in a loveless marriage with the deadly dull Robert (Thomas Haden Church). They coexist in perfect disharmony. In the first scene, we're introduced to their marital misery with Robert shoving a bucket full of his own poo in Frances' face, having been forced to defecate in the garage as Frances spent so long soaking in a nice long bath.

The tipping point in the marriage comes, not with buckets of poo (thank goodness) but when Frances watches one of her friends threaten her bullying husband with a gun and give him a heart attack. She needs a divorce, she says. She doesn't want to blow her husband's horrible moustache off his pedestrian head.

Unlike most British writing that makes its way across the pond and onto American shores, it doesn't seem to have been exposed to much linguistic censorship. The full, kaleidoscopic range of dirty language you would expect to encounter in a case of marital rot is up for grabs, and the characters use it to full effect. There's not a single redeeming person amongst the cast. Everyone is a selfish, egotistical maniacal monster, disappointed with their lot.

This is a brilliant tale of connubial decline, deadly funny and honest portrayal of lovers who are out for themselves. It's the best and worst thing on TV this autumn. Go and watch it now.