Sunday night viewing sorted: the dramatic story of the young Queen Victoria comes to ITV this autumn with a head-strong and lovable Victoria by Jenna Coleman 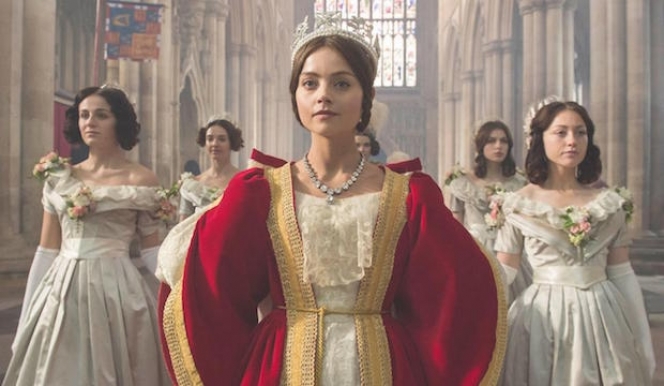 Victoria ITV
It’s good news for TV lovers: the summer hiatus is over. Bake Off is back, Poldark arrives this weekend and, best of all, Downton Abbey has returned to ITV — except this time it’s called Victoria.

Novelist Daisy Goodwin has written an emotional script about a mega posh and complicated young woman that feels so Julian Fellowes, it’s barely a surprise to remember he wrote an identical script for the 2009 film The Young Victoria starring Emily Blunt.

The first episode, Doll 123, opens with 18-year-old Victoria (then Alexandrina) on the eve of her uncle, the King’s, death in 1837 and still thoroughly under the control of her power-hungry mother’s adviser, Sir John Conroy. Her first act as Queen, in the middle of the night, is to refuse the hand of her governess, Baroness Lehzen, offered to her as she walks down the stairs.

Those who know little of Queen Victoria’s history, (or haven’t seen Fellowes’ very helpful film) won’t recognise this as a daring act of rebellion against a secluded and micromanaged upbringing. But, as the realities of her young life begin to tumble out, and as Jenna Coleman’s Victoria, with her heady mix of stubbornness, bravery and hopeless vulnerability begins to clash with the wonderfully sinister and conniving Sir John Conroy (Paul Rhys), we’re reminded that the reason this story is now quite well trodden turf is that it’s a very good one.

Just like Emily Blunt, Jenna Coleman makes for an excellent — albeit far too attractive — Queen Victoria. She lends her all the wide-eyed innocence of a girl falling in love with her Private Secretary, and sudden twitter heart-throb, Lord Melbourne (Rufus Sewell). But it's not all girlishness: Coleman also brings a stiffness and believability to her head-strong determination to unshackle herself from the snakes who seek to abuse her age and her sex to take her power from her.

Victoria's flaws are also laid bare. In a clever act of cinematography that Fellowes would never have thought of, the de-robing and physical examination of Lady Flora Hastings, as commanded by the new Queen, takes place at the same moment of Victoria’s coronation.

Just as the golden robes of power are slunk onto Victoria’s shoulders, Lady Hastings' are stripped from her by two doctors about to probe around insider her in the hope of finding a foetus that will prove Lady Hastings’ infidelity with Sir John.

As the rings of England are slipped onto Victoria’s fingers, Lady Hastings’ grip the sheets in pain. It’s a moment of genius that highlights Victoria’s immense power, and immense fallibility, giving credence to her conspirators’ calls for a regency.

As with all ITV Sunday night drama, this has moments of silliness and hammy dialogue that would make Downton's Lady Mary — or indeed the butler Carson — proud (drama among the servants makes an appearance too). But it looks set to be a highly watchable guilty pleasure that Versailles utterly failed to be. We can’t wait for more.