What happens to the life of a celebrity when they're accused of rape? National Treasure is unmissable drama on Channel 4 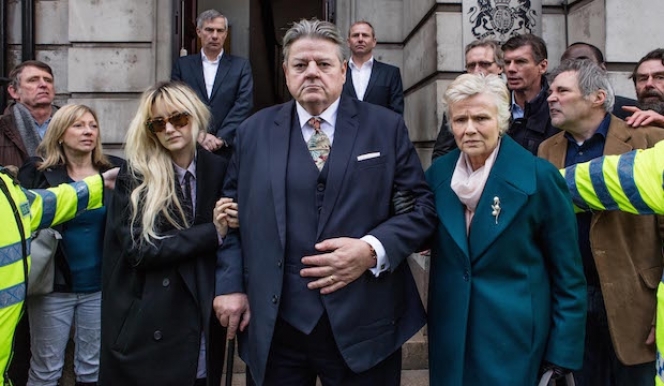 "They think I'm Jimmy Saville. They think I'm f***king Jimmy Saville," Paul Finchley (Robbie Coltrane) mutters to his lawyer in a cold, dank cell three hours after being charged with rape. Days later, Finchley repeats this sad little phrase over to himself again, as the credits roll for the first episode of Channel 4's new drama National Treasure.

The Jimmy Savile scandal was a watershed moment for Britain's celebrities. Those talented household names whose acclaim for so long secured them from justice, suddenly found themselves riding the wave of public indignation as a flood of women came forward to testify to crimes committed decades ago. Some celebrities, such as Rolf Harris and Stuart Hall, were finally punished for what they did, but others had their lives ruined without reason.

This cultural sea change, dramatised by Jack Thorne – writer of Harry Potter and the Cursed Child, offers a judgement-free look at what happens to a public figure's life when they're accused of historic sex crimes.

When we first meet Paul Finchley, it seems he has the world eating out of his hands. Real life Alan Carr and Frank Skinner are among a crowd of A-listers weeping for joy as Finchley presents his best friend and writing parter with a Lifetime Achievement Award. Admittedly, Finchley doesn't hand over the award with total grace and dignity. His jealousy is obvious, as are his intentions towards the young and glamorous women at the award ceremony.

These are the questions that plague Finchley's long-suffering wife, Marie. Played by the brilliant Julie Walters, Marie is a funny, religious, celebrity-averse woman. Less troubled by the news that Finchley might be a monster in comic's clothing, is Finchley's daughter, Dee (Andrea Riseborough). She is full of venom and spite and lives away from her children in a halfway house for people suffering from addiction. Her unhappiness points towards Finchley's bad character just as Marie's loyalty points at his good.

This is unmissable drama: a clear-eyed look at what happens to a man whose reputation and career is trashed when a sexual abuse claim is raised against him. Coltrane is utterly believable as a self-interested but fundamentally likeable man, who could be hiding a terrible secret, or not. Reaching our screens just as the Yewtree panic begins to recede from the public eye, National Treasure is also a look back over UK culture of the past few years. Catch it on demand now. It's the best thing on TV this autumn.