The Crown Dual is a new comedy from Daniel Clarkson, co-creator of Olivier Award nominated shows Potted Potter and Potted Panto. The play centres around an ambitious actor, Beth (played by Rosie Holt), who misses out on landing her dream role as Queen Elizabeth in TV series The Crown. She decides to take matters into her own hands by re-enacting the entire plot. Of course Beth cast herself as young Elizabeth, then forces her agent, Stanley (played Brendan Murphy) to act as all the other members of the Royal Family.

The pair make a strong comedic duo; Holt is an Edinburgh Fringe regular and an Amused Moose New Comedian of the Year 2018 and Murphy regularly appears on Potted Potter and is one half of cabaret duo The Crooners. Together they're sure to put on a riotous Royal Affair like you've never seen with 70 minutes of farcical entertainment packed with period accents, hat swapping and corgi impressions. 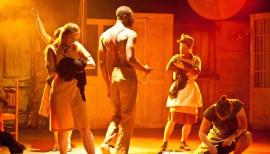