Her acting career spans nearly 70 years, with extensive roles in theatre, television and more than 50 films. And her innumerable accolades include Emmys, Golden Globes, BAFTAs, Oliviers, a CBE, DBE and plenty of honorary fellowships and doctorates. The 84-year-old is still prolific on screen, having finished filming for the movie adaptation of Downton Abbey film. But her last theatre stint was playing the lead role in 2007's production of Edward Albee's The Lady from Dubuque.

Now Maggie Smith returns to the London stage to tell the extraordinary life story of Joseph Goebbels' secretary in a new play at Bridge Theatre. A German Life is based on a testimony given by Brunhilde Pomsel before her death in 2017 at the age of 106. Playwright Christopher Hampton (Dangerous Liaisons) and director Jonathan Kent translate the story of Pomsel's life as relayed in over 30 hours of conversation into a new one-woman show.

After working for a Jewish insurance broker and a German radio station, Pomsel's fast typing saw her 'promoted' to the role at the ministry of propaganda. As Joseph Goebbels' private secretary, she was responsible for altering statistics and facts for optimum public impact. Pomsel worked alongside Goebbels right up until he committed suicide and poisoned his six children in 1945.

After the war, she was sent to prison camps for five years for her role in the Nazi government. 'I had no idea what was going on. Or very little. No more than most people. So you can’t make me feel guilty,' she maintained many years later.

The poignant combination of real-life experience and regret offers a rich role for Maggie Smith's return to the theatre and an enlightening evening for audiences. With such an accomplished leading lady and a very brief five-week run, A German Life will be a surefire sellout. Be ready to book tickets. 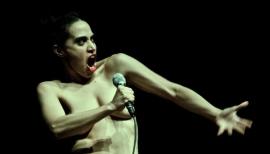