The two hour drama tells the stories of three women, spanning 1970 to 2040 and beyond. But instead of a synoptic narrative, or flitting between eras, the play tells all three stories simultaneously.

They are linked by a strand of desperate unhappiness, rippling out from one woman taking her own life. The portrayal of suffering is unflinching but not without hope; regular wry humour breaks through and the capacity to survive grows with each generation.

The stage is sectioned into three. On the left it’s the 1970s, where we see brittle beautiful Carol (Hattie Morahan), chain-smoking her way through chronic depression.

In the middle, from the nineties to noughties, we have her daughter Anna (Kate O'Flynn), growing from a drug-addled young woman, through rehab, a hippy commune then motherhood.

On the right of the stage, from 2033 onwards, we see grandaughter/daughter Bonnie (Adele Leonce) as a brusque doctor struggling to open up and repelled by the very notion of her fertility.

All three narratives play out together. Dialogue overlaps and the different actions compete for your attention. Both the script and direction are a bold departure from the rules of storytelling and at times Anatomy of a Suicide can be stressful to watch. Voices layer over voices over voices, and you’re often not sure where to look.

But as you adjust to the rhythm of this triple-stream, new meanings are made as words connect across the time periods, creating starkly poetic sentences from different snippets of monologues.

The experimental from might not make for the easiest viewing - but it combines immediacy and depth to devastating effect.
‘Mental Health’ is in the spotlight across mainstream media, but for all the overdue discussion and support, the roots and repercussions of suicide and self-harm are still buried deep.

Without glamorising, demonising or attempting to universalise the mental health issues at the core of the drama, this play explored the human experience. Instead of trying to ‘solve’ the problem, Birch and Mitchell trace one story, following the tangle of genetics and trauma to show corrosion and recovery. 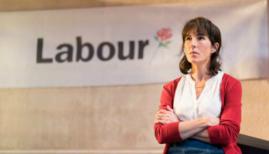