Since collecting awards at the Edinburgh Fringe and beyond with the marvellously macabre tale of immoral, mean and manky children, Les Enfants Terribles have gone on to create Roald Dahl dinner parties, puzzling Sherlock Holmes experiences and an immersive Alice in Wonderland.

Now, a 10-year anniversary production of their first hit comes to the historic Wilton's Music Hall. The Terrible Infants tells the tales of unfortunate creatures including Thumb (the child who eat his mum), Thingummy (a boy so unremarkable even his own parents forget him) and many more. The combined force of these vignettes combines the spirit of Roald Dahl, Tim Burton and Hilaire Belloc with live puppetry, music and physical theatre. And this revival has an extra special addition: Dame Judi Dench, queen of the West End and first lady of film, will provide pre-recorded narration. 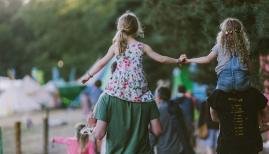 Family guide to Latitude: how to do the UK's friendliest music festival