Allelujah! is set on the geriatric ward of ‘The Beth’ hospital in Yorkshire, where its staff – led by chairman of the hospital trust Salter (Peter Forbes) – are fighting to save the institution from looming NHS cuts. The staff have enlisted the help of a TV crew to film the elderly patients sing in a choir together, and ultimately present the cosy hospital as an asset to the local community and indeed the health service at large. 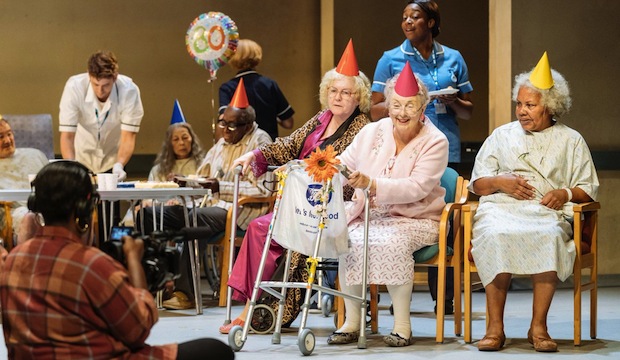 Members of the Allelujah! cast

Former miner Joe (Jeff Rawle) is a rude, senile patient on one of the hospital’s wards. With a visit from his son Colin (Samuel Barnett, a former History Boys cast member) – a management consultant working for the health ministry in London – comes an argument in favour of closing The Beth, based on the Tory-led narrative that hospitals seeing citizens from the cradle to the grave is pure sentimentalism. But a dramatic end to the first act turns what initially appears to be a political play about the privatisation of the NHS into a crime thriller, as we learn one nurse doesn’t have her patients’ best interests at heart.

Allelujah! is peppered with wonderfully surreal moments – such as when the virtually immobile patients rise from their wheelchairs to sing and dance to music-hall era songs (’ A, You’re Adorable’ and ‘Love and Marriage’ are particularly moving). It’s also hugely funny, from one-liners that prove 84-year-old Bennett is still quick-witted and sharp, to its overarching themes, such as the alliances between patients and staff, who grumble about each other yet try to appease their wishes. The tense familial relationship between Joe and Colin tears through the play’s humour, laying bare a shift in ideologies between the two generations post-Thatcher.

Bennett makes affectionate jests at stereotypical pensioner traits, but the emotive bursts of raw, a cappella singing – most notably the striking opening sequence in which dementia-ridden Mrs Maudsley (Jacqueline Clarke) sings alone on the bare stage – pull on the heartstrings. 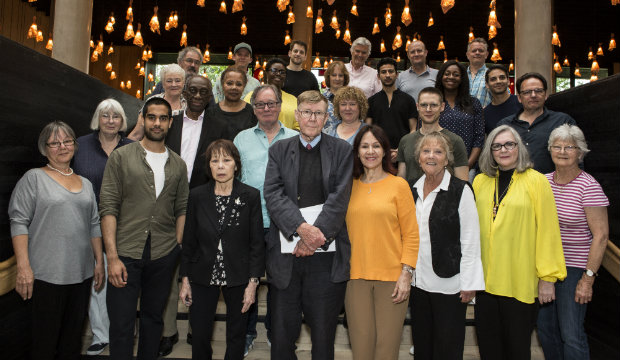 In a production of several noteworthy performances, Deborah Findlay is particularly good as Sister Gilchrist; her transition from a carer who gives her patients tough love to someone with a chillingly sinister motive is effortlessly smooth. Meanwhile Sacha Dhawan (another History Boys veteran) single-handedly represents the plea for foreign health workers to continue to be allowed to work in UK hospitals post-Brexit, in his role as Valentine, a passionate Doctor risking deportation because of visa issues.

With a 25-strong cast, some of whom do little more than get wheeled on and off, the stage and the narrative can sometimes feel a little cluttered. Meanwhile, the final spatter of monologues seems like an attempt to quickly tie up loose ends. Still, Allelujah! is a timely ode to the NHS, first seen in the year marking the institution's 70th anniversary, that’s punctuated with all the right elements to make it as timeless as the rest of Bennett’s repertoire. The personification of the ruthless, target-crunching state in Sister Gilchrist is a clever one, and Dr Valentine’s final, wary speech on what England will become if it continues to close itself off from the world is a powerful, omniscient cry for change.