68 CW readers are interested
Review: An Ideal Husband, Vaudeville Theatre 4 Review: An Ideal Husband, Vaudeville Theatre Intern Culturewhisper
There is something quite tantalizing about seeing real-life father and son Edward and Freddie Fox spar off each other as fictional father and son in Oscar Wilde’s An Ideal Husband. Screen legend Edward Fox plays respected politician Earl of Caversham, while Freddie Fox, his idle, unemployed son Viscount Goring. Whether prancing around the stage, reclining on his velvet-clad divan, or admiring the aesthetic of his ever-changing buttonhole, Freddie embodies the Victorian dandy with effortless ease.

That’s until the onslaught of Wilde’s sharp witticisms and trademark skewing of upper class Victorian society remind us of its somewhat dated ideals. The cast keep it fresh, though, with their spot-on comedy timing and first-class performances.

With her strident voice and bellowing chuckles, Frances Barber excels as Machiavellian Mrs Cheveley. A blast from Sir Robert’s shady past, Mrs Cheveley makes it her mission to disgrace Sir Robert and his very proper wife, Lady Chiltern. Dressed in white, with calm and sensible manners, Lady Chiltern, played by Sally Bretton, is Cheveley’s perfect opposite. It makes for pleasing balance, and a lot of good laughs.

Susan Hampshire, as sharp-tongued Lady Markby, executes her string of social quips with perfection. However, it's self-indulgent Goring who triggers the bellows of riotous laughter from the audience throughout the play.

While it can feel like an exercise in nostalgia at times, the strong performances drive the plot with pleasing pace. A charming, delightful revival, Wilde's An Ideal Husband still holds the power to entertain. 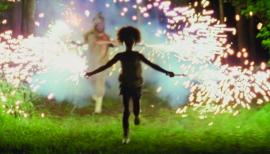