Teen drag queen musical Everybody's Talking About Jamie is a young, fun and fresh celebration of being a little bit different

Based on a true story told in 2011 BBC documentary Jamie: A Drag Queen at 16, it follows a teenager who doesn't fit in. Jamie is openly gay – and adept at dealing with the school bully's homophobic taunts. But when your career options are, apparently, limited to prison guard or forklift truck operator, how do you reveal a preference for high heels, short skirts and glitter?

Bravery and empowerment dominate this new musical, as Jamie learns to celebrate his inner self. The story and combination of pop/rock belters and ballads come courtesy of writer Tom McRae and Dan Gillespie Sells, lead singer-songwriter of pop band The Feeling. 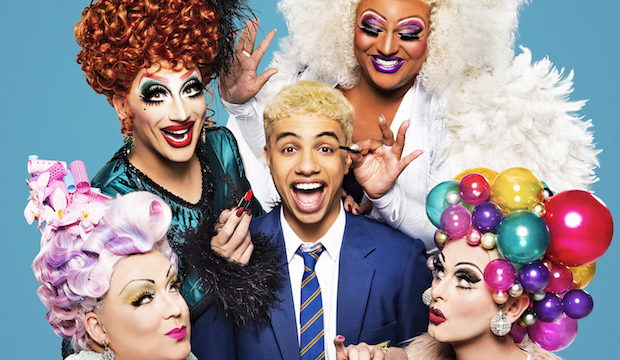 Like mega-hits Billy Elliot and Kinky Boots before it, the musical is a heart-warming celebration of an against-the-odds victory. Against a sparse urban backdrop, captured in greyscale projections by designer Anna Fleischle, the boy-in-a-dress narrative has a fairytale sparkle. But there's a fresh, contemporary spark to the show, too.

Noah Thomas is magnetic as platinum-haired Jamie, whether strutting around with his fellow students as backing dancers, or twitching with nerves before his drag-club debut. Throw in hijab-wearing best friend Pritti Pasha, supportive single mum, and ever-present neighbour Ray and you have a sparkling cast of 21st-century heroes. Instead of getting bogged down by homosexuality, race or religion, the narrative takes everything in its stride. We get to see the characters' personalities rather than getting caught up in what they represent.

And, while there's enough triumph over adversity to leave you with the warm and fuzzies, we're never patronised into thinking everything can be wrapped up in a neat little bow. Though we're left with a flicker of realism and irresolution, there's no doubt that everyone in the audience is rooting for Jamie.