The Jamie Lloyd Company has done it again: The Seagull is a minimally dressed take on the classic brought vividly to life by a skilled ensemble

18 CW readers are interested
The Seagull, Harold Pinter Theatre review 4 The Seagull, Harold Pinter Theatre review Lucy Brooks
The Jamie Lloyd Company is nurturing a winning formula: take a classic play, front it with a Hollywood star and stage it minimalistically, daring the audience to suspend their disbelief, watching the drama unfold on an almost bare stage. It worked with the company’s rap-fuelled Cyrano de Bergerac, starring James McAvoy sans prosthetic snout, and so it does here, with their pandemic-delayed take on The Seagull, with Emilia Clarke (Last Christmas, Game of Thrones) leading a masterly ensemble in animating Chekhov’s big reflection on the angst-ridden lives of playwrights and their players.

Like all four of Chekhov’s major plays, The Seagull sees its characters marooned together on a country estate, where some yearn for a more interesting life. Love triangles are rife among this lust-plagued lot, most of whom are admired by one party but pining after another. At least initially, professional success also alludes the brooding, wannabe playwright Konstantin (Daniel Monks), living the shadow of his actress mother Arkadina (Indira Varma), and amateur actress Nina (Clarke), who is infatuated with the celebrated writer and young lover of Arkadina, Trigorin (Tom Rhys Harries). 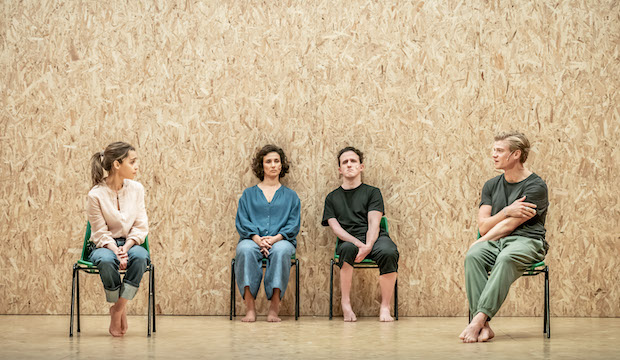 Anya Reiss’s translation captures the internal turmoil and heartache of Chekhov’s characters while updating it with references to wearing hoodies around the house (hello lockdown), inflation and the rising cost of living.

On designer Soutra Gilmour’s plywood box set, the beautiful lake that’s held accountable for making them all feel so romantic is left to our imagination. As is the house they’re holed up in. Gilmour’s hyper-minimalist staging has the actors – barefoot and dressed in simple, contemporary linens – arranged on plastic, school-evoking chairs, addressing most of their lines to the audience rather than one another. All parties are on stage the whole time, staying quietly in character when not the focus of the scene, and none more so than Clarke’s Nina, who reminds us of her feelings for Trigorin through starstruck smiles and bashful glances in his direction. 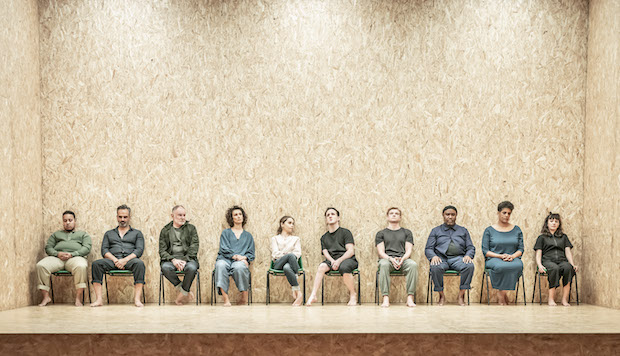 A less fine-tuned company would struggle to lift the story from the page in these sparse surroundings, but through his tight cast, each of who seems to feel every inch of their character’s fragility, misery or throbbing passion, director Jamie Lloyd conjures something moving and powerful.

This rejection of naturalism bleeds into the acting, where characters including Daniel Monks’ softly spoken Konstantin and Sophie Wu’s emo Masha deadpan their way through speeches about their insecurities and unhappiness. It’s jarring, but it works. Konstantin suicide attempts, while loud enough to make you jump, are rendered eerily distant here with no props, falls or shifts off stage to convince us of what’s happening.

Clarke earns our sympathy as the girlish, excitable Nina, whose downcast eyes and hopeful smile when thinking of Trigorin (played by Harries as awkward and arrogant in equal measure) shifts into something more manic as the narrative progresses and we learn of her fate. Then, her devastation is palpable. 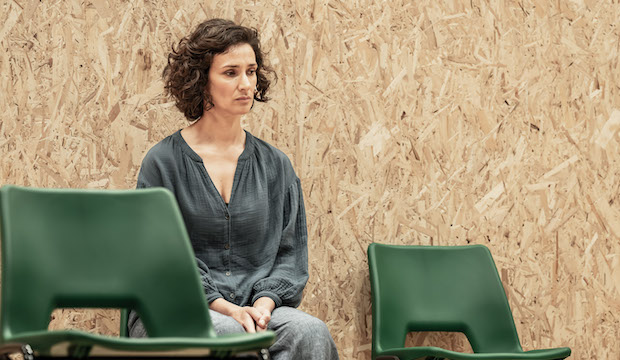 While Clarke is the celebrity pull here, it’s Varma who delivers a show-stealing performance as Arkadina. In contrast to her despondent son, we feel her zest for life and her desire to commandeer the attention and affection of those around her as she slips between her multiple identities as mother, lover and faded starlet.

With The Seagull, Lloyd cements the success of his daring formula for bare-bones, celebrity-led theatre. Should the final part of his would-be 2020 season, A Doll’s House, make it to the West End stage, here’s hoping for a similarly sparse but spellbinding spectacle.

Tickets to The Seagull are now on sale. Click here to book