With The Comedy About a Bank Robbery and The Play That Goes Wrong still going strong in the West End and a new TV series, Mischief Theatre are proven purveyors of outrageous comedy, and this latest show is the most slapstick yet. The theatre company have joined forces with award-winning magicians Penn and Teller, to bring tricks and marvels into the comic mix.

We follow the hapless Sophisticato as he stages a magic show in honour of his father, a famous magician killed in dubious circumstances surrounding magical props. But things go wrong before they've even begun...

There's a rogue bunny peeping out from the theatre balcony and the doves are cooing around the auditorium. The chaos continues when we meet the gang of magicians. There's 'The Mind Mangler' (Henry Lewis) who promises he can guess everything about the audience with his ability to taste a name, smell a job title and convene with the dead. There's daredevil 'The Blade' (Dave Hearn), who is as brazen as he is mal-coordinated, resulting in plenty of blood-spilling injuries. German acrobat duo Spitzmaus (Bryony Corrigan) and Bär (Nancy Zamit) high-kick their way across the stage, missing cues and misunderstanding English. 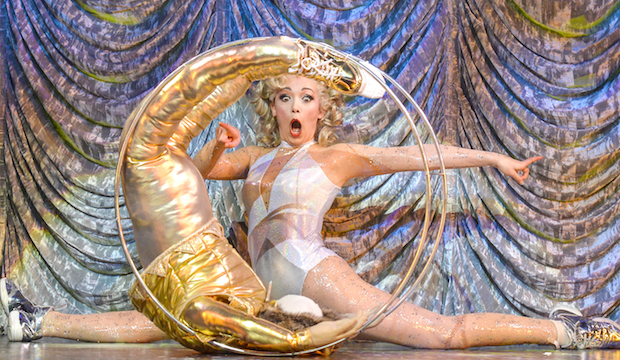 As stalwarts of the Mischief Theatre ensemble, the actors are finely tuned to the over-the-top comic antics and they make the accidental injuries and magical maladies feel the right amount of silly. If the 'bangs head' and 'falls over' school of comedy leaves you cold, this show is unlikely to change your mind, however slick the production. And after a full two hours the constant disasters do get a little tiring. But there are more than enough laughs to keep you going.

As each trick fails more spectacularly than the last, the best moments are when the magic is so wrong it ends up being right, such as a lost card that ends up in a water tank, or an audience member who proves to be psychic.